You could consider Norm Glowach savvier than most: He didn’t arrive at Camp Copperhead with any illusions about how far the fantasy would go. So he wasn’t let down when the star attraction turned out to be a little bit of a grump who “doesn’t suffer fools.” Glowach, a government worker from Yellowknife, says he signed up at singer-songwriter Steve Earle’s camp in upstate New York hoping to learn a thing or two about his first love—crafting a piece of music. Glowach isn’t a professional musician, and at 56 he says, “I’m too old now to start.”

But like countless other adults who enrol themselves in fantasy camps, Glowach considered a few thousand dollars—registration at Camp Copperhead with a private room and bath costs about US$3,600—a worthwhile expenditure if it meant keeping his youthful passion aflame. While others obviously harboured notions that ponying up the dough would entitle them to a chance to befriend “Steve,” Glowach had the more realistic goal of absorbing a few “tips, hints, inspiration—all of those things are helpful to me to continue my growth and keep me interested in this puzzle we call songwriting.”

Among the activities proposed as antidotes to the over-scheduled life of the contemporary adult, few sound as wholesome as sleep-away camps for grown-ups, where participants can hope to rekindle the innocent hopes of childhood—at least for a few days. Author and journalist Christopher Noxon has coined the term “rejuveniling” to refer to this yearning in its various forms. While the popularity of fantasy camps is difficult to quantify, the category seems to have gained currency in recent years, after first appearing around the early 1980s as a means for baseball fans to play make-believe.

Options abound. In addition to camps for would-be songwriters like Camp Copperhead; there are camps for those who wish they could be professional poker players or surfers; even camps for people who fantasize about fighting off zombies in the smouldering remains of contemporary civilization (albeit with catered lunches provided).

The cost can be anything but child-sized. Take hockey camp: It cost participants $4,500 to lace up the skates and glide alongside retired stars Guy Lafleur and Yvan Cournoyer in the March 2019 edition of the Montreal Canadiens fantasy camp. (The fee included three nights’ stay and tickets to two habs games.)

Music camps can be even more expensive than sports camps. The Las Vegas–based Rock ‘n’ Roll Fantasy Camp series, for instance, features middle-aged icons drawn from the upper echelons of the rock pantheon, including Wings guitarist Laurence Juber and provides campers with the opportunity to jam with Cheap Trick. Hanging with the rock gods can only be had for Olympian prices: Booking one spot in an upcoming four-day hard rock Rock ’n’ Roll Fantasy camp in February in Los Angeles costs a minimum of US$4,999, and adding a few extras (such as photos with the stars) can easily add thousands to that bill.

Still, a newer wave of more modestly conceived camps offer an element of escape with less of the star-chasing aspect. Two Islands Weekend, held just outside of Toronto, costs just $415 for three days. At this camp the theme is camp itself: going off-grid and enjoying nature like we did when we were kids. To ensure that the mental age reversal was encouraged to take full effect, some of the accoutrements of adulthood were stripped from registrants upon arrival.

For Glowach, the skills he polished were valuable, but the connections he made to like-minded people were precious, too. “I was inspired enough to write five songs while I was down there, and I learned a bunch of tricks I didn’t know about,” he says. As for the new friends he made: “I fully expect I’ll do some writing over the Internet with them in the next couple of years.” 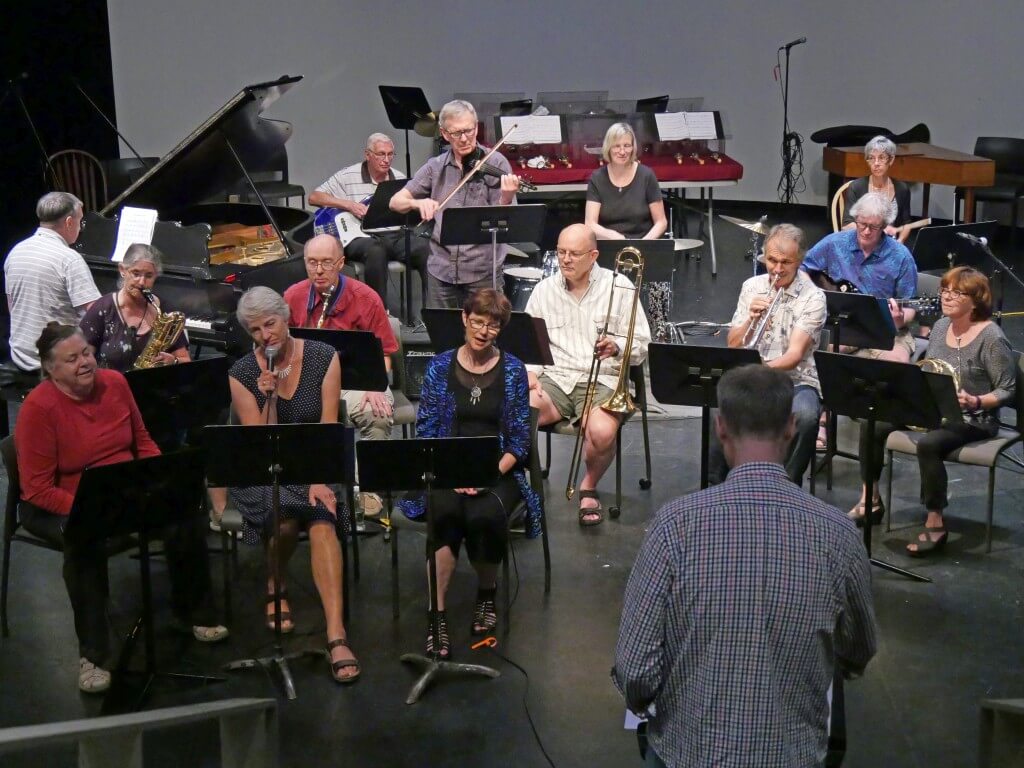 If you miss the Jazz camp days of your youth than Lake Field Music Camp is the spot for you. The camp, this year running from Aug 11-18th, has been operating since 1977 as a retreat that brings together amateur musicians and an exception faculty of 20+ professional musicians/educators for a week of instruction and creativity in a friendly and supportive environment. Singers and instrumentalists build their program from 60+ ensembles and workshops in classical, jazz, world, and folk music. The dates have already been selected for the 2020 iteration, taking place from August 9-16.

Cost: prices are all-inclusive and range from CA $899 to $1,499 for the week; lakefieldmusic.ca

By Ben Dinsdale and Adam McDowell