Bond bears: Admit you were wrong

One of the most common excuses made by forecasters is, “I wasn’t wrong, I was just off with the timing.” But that fails to acknowledge that timing is an integral part of any forecast. Imagine a weather reporter predicting rain on Monday and claiming he was still right when the downpour doesn’t arrive until Thursday.

We need to demand the same accountability from the commentators who have been predicting rising interest rates for about five years now. Even if rates do rise significantly in the next year or two—which would cause bond prices to fall—they won’t be able to claim their predictions were accurate but merely late. The only honest thing to do is admit they were dead wrong—and to stop making forecasts that encourage investors to abandon their long-term plans.

The bond bears had already been growling for a couple years when I wrote a column on this topic for a 2011 issue of MoneySense. The article quoted an adviser who had arrogantly told me “the bond index funds you recommend in your Couch Potato portfolios will soon be a disaster.” Like just about every other commentator at the time, he simply assumed rising rates were inevitable. Yet here’s how the yield on Government of Canada bonds changed in the three years since his gloomy prediction: 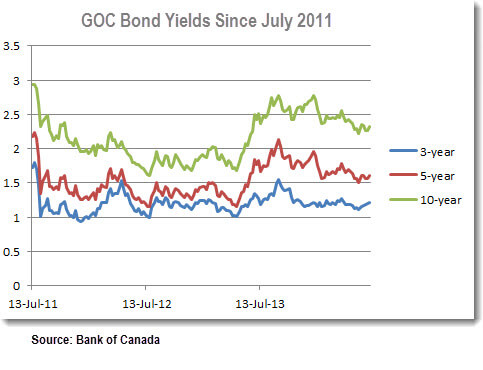 The soothsayers had a brief opportunity to be smug in 2013, when rates spiked in the spring and caused bond prices to fall sharply. In September of last year, another adviser proclaimed that “in a very low rate environment, where rates have nowhere to go but up, you’re pretty much guaranteed to in a best-case scenario break even or, in a more likely scenario, lose some money.” As it turned out, rates began to fall almost as soon as those words were out of his mouth. This chart shows the trajectory of Government of Canada bond yields in the nine-plus months since that article appeared: 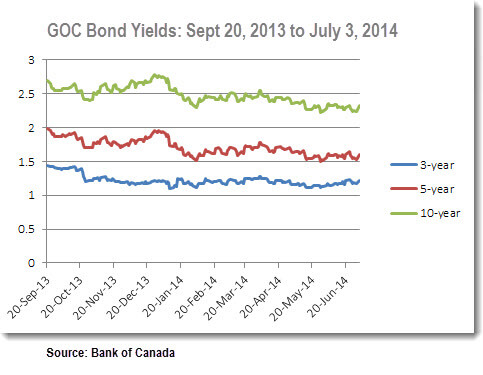 What if you just stayed the course?

And how would you have fared if you’d simply held a broad-based fund like the iShares Canadian Universe Bond (XBB)? You would have had some volatile months, but over the most recent one-year, three-year and five-year periods, bonds have defied all expectations with returns in the neighbourhood of 4.5% to 5%:

XBB five-yer returns I need to stress that I’m not arguing anyone should have expected bond returns would be this good. Nor should we ignore the very real possibility of a bear market in bonds, perhaps with a couple of years of negative returns. The point is simply that investing is about understanding and managing risks, not trying to avoid them with tactical moves that frequently backfire.

Instead of predicting “disaster” or declaring “rates have nowhere to go but up,” advisers should help investors understand what could happen to bonds if rates rise or fall, and then encourage them to choose a fund appropriate to their time horizon and risk tolerance.

If you’re uncomfortable with volatility, for example, use a short-term bond fund or a ladder of GICs for your fixed income holdings. If your time horizon is several decades into the future, you can use a broad-based fund with a longer duration: your risk of loss is higher, but so is your expected return. The important idea is that your investing decisions should be based on your personal goals and a clear understanding of risk—not on the useless forecasts of people who claim to know the unknowable.