BlackRock Canada has slashed fees on about 10% of its iShares ETFs.

BlackRock Canada, already the dominant player in Canada’s vibrant exchange-traded fund (ETF) market, has slashed fees on about 10% of its iShares ETFs. Not only has it undercut its major ETF rivals in the key asset class of Canadian equities but it’s widened the already egregious gap between the Management Expense Ratios (MERs) of ETFs vis-à-vis Canadian mutual funds.

Most dramatic of the fee cuts is on the iShares S&P/TSX Capped Composite Index ETF (XIC/TSX). As the chart below shows, its management fee is being slashed by a massive factor of five, from 0.25% to a minuscule 0.05%, effective March 25. That makes the $1.37 billion (AUM) Canadian equity fund arguably the lowest-fee ETF or mutual fund in the country: the previous claim for lowest MER was the Horizons S&P/TSX Index ETF (HXT/TSX). HXT officially charges an (almost!) equally stingy 0.07% or 7 basis points but clocks in at an identical 0.05% after a 0.02% management fee rebate.

Several other iShares ETFs have seen fees cut in half: two bond ETFs with MERs of 0.25% and 0.3% (XSH and CAB)  have both been cut to 0.12% while the 0.35% fee of the iShares Canadian Long Term Bond Index ETF (XLB) has been almost halved to 0.18%. There are also less dramatic cuts to some of its U.S. equity, EAFE and Emerging Markets ETFs. 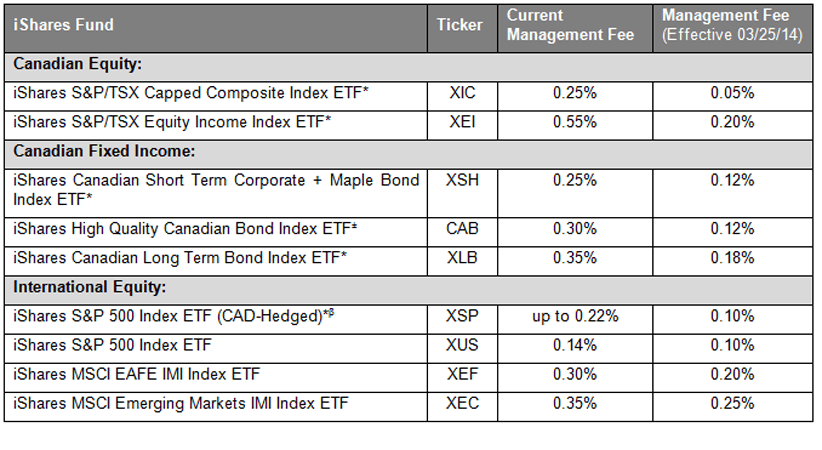 These ETFs are all part of the launch of iShares’ nine-fund “core series,” which it describes as a “suite of low-cost funds designed for the foundation of Canadian investors’ portfolios.” BlackRock unveiled its “core” concept about 18 months ago for American investors but this domestic core series was designed and built in Canada for Canadians, said iShares Canada Head and Managing Director Mary Anne Wiley in an interview.  But she emphatically declined to characterize the fee cuts as an ETF price war. For one, the price cuts are only on nine ETFs in a lineup that totals 92 in Canada. Those nine ETFs make up less than 10% of iShares Canada’s $42 billion in assets under management. “It’s about investors maturing and thinking of budgeting in portfolios,” Wiley said, “The core series makes it easier to do so.” Core ETFs are generally bought and held for a long time period, and complement more specialized “explore” ETFs.

In fact, because specialized regional and sector ETFs tend to have higher fees, the average MER of ETFs in Canada has risen from 29 basis points (0.29%) in 2009 to 35 basis points (0.35%) in 2013, Wiley said. “We’re seeing more of a price discrepancy between the two styles of investment. Both have a place.”

Dining out versus home cooking

BlackRock Canada already has a lineup of balanced ETFs called the “Portfolio Builder Funds,” plus some legacy balanced funds from the former Claymore ETFs it acquired two years ago (at one point called Claymore CorePortfolios). They are more one-size-fits-all solutions that appeal to investors who want iShares to decide on asset allocation and ETF product selection. Wiley compared this to being served a nice meal in a restaurant.

By contrast, the nine new ETFs in the core series allow investors and/or their advisers to customize asset allocation and portfolios to the unique needs of the customer. The analogy here is doing your own cooking with quality ingredients. Or as Wiley put it in the press release: “Every investor is unique, and with this focused suite of funds, investors have the opportunity to match their long-term core holdings to their individual needs and still have the flexibility to complement them with more specialized ETFs that suit their specific objectives.”

Individuals and institutions will pay the same fees on the ETFs, which Wiley described as a “democratic” approach. “A young investor who wants their dollars to grow gets the same benefits on fees as billion-dollar institutions.”

For more on “core and explore” investing see contributing editor Preet Banerjee’s feature, “Best of Both Worlds,” from the November 2012 issue of MoneySense.