Gimme shelter: The financial consumer code and you

The financial consumer code won't in any way limit what you pay to your bank. Here's why

The Conservatives are expected to table a new consumer protection code governing banks in the coming months, but don’t expect the campaign-friendly bill to improve your bottom line. While intended to empower banking customers navigating the financial services industry, pundits say the “Comprehensive Financial Consumer Code” falls flat because it does little to protect Canadians from being nickel-and-dimed at every turn.

“If people think this code will in any way limit what they pay to their banks, they’re dreaming,” says John Lawford, executive director and general counsel at the Public Interest Advocacy Centre.

Instead, the code will only feature standardized fee disclosure boxes on bank statements, loosened ID requirements on new accounts, mandatory cooling-off periods on a greater range of products, and a crackdown on misleading advertising.

As is now the case with Canada’s telecom providers, Lawford would have preferred to see the banks prevented from charging paper-bill fees—not to mention more egregious pay-to-pay tactics, such as charging customers $1 to $2  to make mortgage, loan and credit card payments. 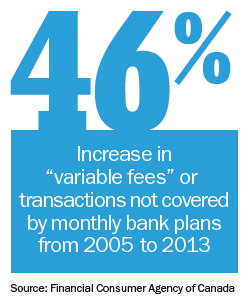 Changes to the Bank Act won’t force bank employees to disclose conflicts of interest when selling products, either. Nor will it affect fringe financial services. “This code isn’t going to do much of anything to deal with payday lenders, rent-to-own companies or debt agencies,” says Jennifer Robson, a political management professor at Carleton University. These providers can raid bank accounts to collect outstanding balances.

There’s also the issue of dispute resolution mechanisms­—or lack thereof. While the code gives Financial Consumer Agency of Canada Commissioner Lucie Tedesco more teeth, she can’t enforce what’s not in it. RBC and TD have opted out of the Ombudsman for Banking Services and Investments’ process for consumer complaints and the code won’t force them back in.

As it stands, the code simply takes what the banks have already promised and puts it in one place, says Lawford. “Unless they put some actual meat on the bones, it’s going to be kind of weak.”