How we crunched the numbers to determine Canada's Best Places to Live.


MoneySense’s Best Places to Live 2014 is our most comprehensive data-driven snapshot of Canadian cities yet. This year, we expanded our list by one, to 201 cities.

While we can’t gauge many of the elements that people enjoy in their cities, the nearness of family, the friendliness of neighbours or even great sunsets, we have measured what can be measured and compared what can be compared from towns and cities across our provinces and territories. To identify the Best Places to Live in Canada we rank each community across 34 separate categories to get a detailed picture of what life is like in each community.

To come up with the ranking, we gathered information on Census Metropolitan Areas (CMA), Census Agglomeration (CA) and Census Subdivisions, (CSD) as defined by Statistics Canada. All of the demographic data was supplied by Environics Analytics. Additional data sources are noted below.

The pie chart below illustrates how we weigh each category group for the main list: 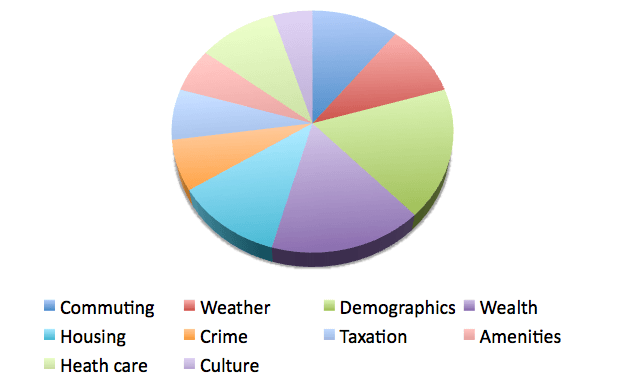 This year we added one city, Port Moody, B.C. to our ranking to bring the total number of communities we rank to 201. The only other change of note affected the new cars category. We view new car purchases as an indicator of wealth and consumer confidence. This year we added in the percentage of new luxury cars purchased to get an even better sense of what is happening within each community. To accommodate this change the percentage of new cars, which was worth two points last year, is now worth only one; the percentage of luxury cars accounts for the other point to keep the weighting of this category the same as it was in previous years.

And while MoneySense strongly believes air quality is an important variable in determining the quality of life within a city, we unfortunately had to drop this category from our ranking system because we were unable to find reliable and current data for each city.

A total of 103 points was up for grabs. Each category (below) was allotted a number of points depending on the importance of the category. For example, employment statistics are worth 10 points while sales taxes are worth 1 point. Some categories are further broken into subcategories. For example, the crime category is determined by statistics in the subcategories of violent crime, crime severity and total crime.

For example, in the area of unemployment, Cold Lake, Alta. had the lowest unemployment rate in the country (3.4%). It was ranked No. 1 in that category and received 10 points. The second-best city in the unemployment category, Boucherville, Que., received 9.95 points. The next city was Lévis, Que. with 9.90 points and so on, down to the 201th city (Campbellton on the New Brunswick/Quebec border. with an unemployment rate of 17.4%), which received no points.

Calculations for some other categories follow a slightly different methodology. For example, in the category of population growth over the past five years, an annual rate of 8.2% was considered ideal. Anything below or above that rate loses points and cities with a population loss receive zero. The same is true for the subcategory of precipitation, which makes up part of the weather category. (The ideal number is 700 mm a year, with anything above or below that level losing points accordingly.) As well, 5 points were awarded on the percentage of people employed in arts, culture, recreation and sports.

Here’s an example of how the scoring system works:

While a perfect score in all categories would give a city 103 points, the top city this year, St. Albert, only garnered 71.51 points followed closely by Calgary at 71.41 points. Our lowest ranking city, Port Alberni, B.C.., scored 36.54 points.

WALK/BIKE TO WORK: 6 points—This represents the percentage of people who walked or took their bike to work. Source: Environics Analytics

HOUSING: 12 points— (6 for average house prices and 6 for time to buy a house) House price data provided by Environics Analytics. Housing data is based on the census estimate for every community at the end of 2011, correcting for changes within the community including age, occupations, and information from local real estate boards. Time to buy was derived from average home price divided by average estimated household income.

NEW CARS: 1 point—New cars on the road as of July 2013. New cars were deemed to be vehicles with model years 2011-2013. Ranking of new cars is based on the percent total vehicles. Source: IHS Automotive, Driven by Polk.

NEW LUXURY CARS: 1 point—Percentage of new luxury cars on the road as of July 2013. New cars were deemed to be vehicles with model years 2011-2013. Ranking of new cars is based on the percent total vehicles. Source: IHS Automotive, Driven by Polk.

INCOME TAXES: 3 points—Cities ranked (lower is better) according to the rate of combined federal and provincial (or territorial) income tax paid on a single person income of $50,000. Source: www.taxtips.ca.

SALES TAXES: 1 point—Cities ranked (lower is better) according to the rate of provincial or territorial sales tax.

HEALTH PROFESSIONALS: 4 points—Percentage of people in each city who are employed in health occupations. Source: Environics Analytics.

NUMBER OF DOCTORS OFFICES PER ’000: 1 point—The number of medical offices in a community divided by the population. Source: Environics Analytics.

AMENITIES: 6 points—Two points for a hospital, 1 point each for university and college. Cities in a CMA area received credit if a particular institution was located anywhere in the CMA. Half a point was given to cities with a movie theatre. Cities could also earn up to 1.5 points for being within close proximity to an airport serviced by one of Canada’s national carriers: Air Canada or WestJet. Cities within 50 km of an airport received 1.5 points, communities within 100 km received 1 point and cities within 200km received half a point.

CULTURE: 5 points—A city could receive up to 5 points based on the percentage of people employed in arts, culture, recreation and sports. Source: Environics Analytics.

Note some of the statistics are available only province to province instead of city by city. Sources: Environics Analytics and the Early childhood education and care in Canada 2012 (Revised 2013) space statistics published by the Childcare Resource and Research Unit www.childcarecanada.org.

The pie chart below illustrates how we weigh each category group for our Best Places to Raise Kids list: 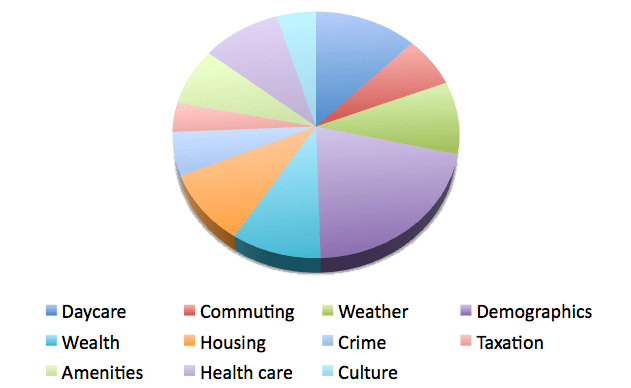 The calculations were adjusted to emphasize services and conditions for immigrants.

The pie chart below illustrates how we weigh each category group for our Best Places for New Immigrants list: 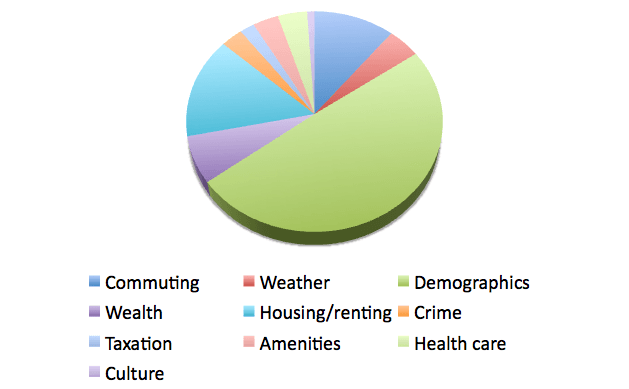