Problem is, some companies reduce–or even eliminate–their dividends during hard times, which can be problematic for investors who rely on them. In addition, there have been long periods in the past when inflation cut the purchasing power of dividends.

You can examine past dividend downturns in the accompanying graph. It shows periods when the S&P 500’s dividend fell from its prior peak in inflation-adjusted terms.

For instance, the real (or inflation-adjusted) dividend paid by the S&P 500 fell after the 2008 crash to about 75% of its prior peak. Investors who had been spending all their dividend income before the downturn would have had tighten their belts–or sell a few shares–to get by for a few years. 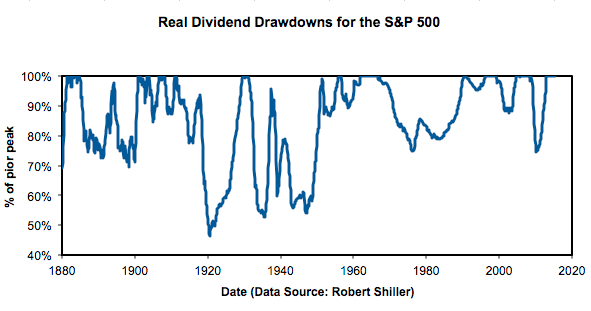 Dividend investors suffered from a much longer down period during the 1970s and 1980s. The S&P 500’s real dividend peaked in 1966, slipped to about 75% of its former high, and didn’t fully recover until 1990. Those living on their dividends in 1966 would have had to cut back for the next quarter of a century.

In addition, there were some giant downturns in the more distant past when real dividends fell below 60% of their former highs.

Mind you, if you take such a conservative approach, you’ll likely end up leaving a large estate to your heirs. If you want to die broke–or nearly so–then you don’t need to be quite so cautious.

Here’s the updated Safer Dogs of the TSX, representing the top yielders as of July 21. The list is a good starting point for those who want to put some money to work this week. Just keep in mind, the idea is to hold the stocks for at least a year after purchase–barring some calamity.

Barry Ritholtz interviews Howard Marks: Mr. Ritholtz talks to Mr. Marks about his book, letters, and why so many people make the same financial errors.

9 women kept a secret for three decades: A fun story about a sneaky charity.