The days after Findependence Day

The lines between work and leisure have blurred for MoneySense Editor Jon Chevreau, who celebrated the world's first Findependence Day party over the weekend. 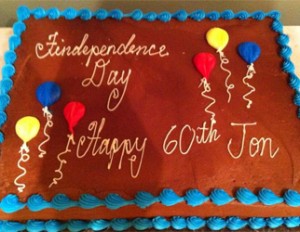 Those who follow my personal blog or social media feeds may have noticed over the past weekend that I claim to have hosted the world’s first Findependence Day party. As you can see from photographs posted on Facebook and Twitter, my 60th birthday party on Saturday featured balloons and fireworks—just like the cover of the new just-published U.S. edition of my financial novel, Findependence Day.

Since this is the Financial Independence blog, it may seem odd to some that I have so far refrained from comment on this here, particularly as today marks my one-year anniversary at MoneySense. Some might infer from this silence that since I can now take early Canada Pension Plan (CPP) benefits, that I have therefore chosen to do so, along with any employer pensions to which I’m entitled, and abandoned the workforce for a permanent vacation.

Findependence is not the same as retirement

However, the day after Findependence Day may be almost exactly the same as the days preceding it, except that you’re more conscious of the fact you’re choosing to continue to work, rather than feeling one has no choice but to continue. As I note in the book: “Financial Independence is not the same thing as Retirement. It means you continue to work because you want to, no because you have to.”

The new edition features a foreword by Kansas City-based fee-only planner Sheryl Garrett, founder of the Garrett Planning Network Inc. (You can read it free here, along with the first two chapters). When I expressed my ambivalence by email she replied, “Remember, financial independence doesn’t mean quitting. You’re living what you preach through the novel.”

Do retirees have weekends?

In the current issue of the magazine now on newsstands, Speed Reader focuses on Kathleen Wronski’s aptly titled book, If I Retire, How Will I Know When It’s the Weekend?

Well, if it’s anything like the weekend I just experienced, I won’t be able to tell the difference between the workweek and the weekend because I’ll be reading, writing, blogging, tweeting and organizing an event. I took last Friday off to prepare for the party and book launch, filed my income taxes, had lunch with my financial adviser, then met with my website developer to rejig findependenceday.com for the book launch. Saturday was full of party prep and several hours of blogging and social media agitation on behalf of the new edition. Sunday was a clean-up day in the party’s aftermath, then researching for a speaking event looming on the horizon.

I won’t go so far as to say it was restful to return to MoneySense‘s offices Monday morning but the point is that in my vision of Findependence, the lines between work and leisure get very blurry. I enjoy reading, writing, blogging and interacting with the public on social media. I enjoy investing and monitoring the media coverage of the global economic and political scene. MoneySense is a great place to work with fabulous benefits and people. A talented team of writers, editors, artists, photographers and production people put out a quality product that enhances people’s financial lives and it’s a pleasure to be a part of that creative process. On the business side, an equal number of people mobilize advertising, subscriptions and the growing digital part of the enterprise.

Just because it’s now possible to collect modest government benefits doesn’t mean it’s advisable to do so. As we all know, life is long and these days life expectancy is increasing. One of the people invited to my party is 96 years old and still going strong. Given my hardy gene pool and relatively healthy regimes on the dietary and exercise front, it would be crazy to slow down now, although I can see the attraction of a four-day-week and eventual phased retirement as the traditional retirement age of 65 approaches. Of course, as Wronski pointed out in her book, financial planning would be much easier if we knew the precise date of our death!

But let’s indulge in a little thought experiment on this idea. If I knew my number was up next month, would I still come to work? Probably yes, at least to finish the issue now in production. And if I knew tomorrow were my last day on the planet would I still come to work? No, I  would choose to spend the last day wrapping up estate planning issues and being with my family. I believe most people would do the same.

Poverty and boredom at a single stroke

Financially speaking, given today’s low interest rates and volatile stock markets, it takes a hefty portfolio to spin out enough income to live life in style. We all know that the longer you work into your sixties or even seventies, the bigger the payout from CPP, OAS and workplace pensions and the less of a load will be placed on investment portfolios. As I wrote in a blog some months ago about a line from the TV show Midsomer Murders, retiring too early can mean “poverty and boredom at a single stroke.”

God and my employer willing, I’ll continue to do what I enjoy doing for some time yet. To reiterate, financial independence is not the same as retirement. Ideally, it precedes retirement by decades. Findependence means freedom and flexibility. Why wouldn’t you want that as early in life as possible? It lets you be creative and a little more inclined to take risks. In fact, creativity is not possible without taking risks. I’m taking one right now with the book and this installment of this blog.

I wouldn’t have it any other way.