Am I on track to retire early and travel?

Time to travel and spend more time with the grandkids 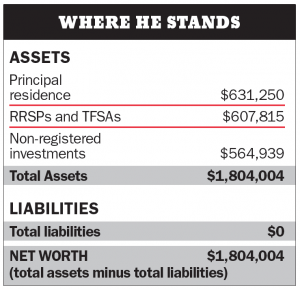 Rick Morrison, 58, would like to retire now. After working full time as an accountant in Edmonton for 35 years and raising five kids, he and his wife Anne, also 58, would like to kick back and enjoy some travel as well as spend more time with their two grandchildren in Calgary. After 15 years of marriage—a second marriage for both—Anne received an inheritance two years ago from her deceased mother’s trust that gives her a monthly income of $5,000 gross for life. Rick would like to match that monthly income, and hopes his $1.8 million in net worth—which includes a $1.17-million investment portfolio—will be enough. Right now, Rick says that 50% of his investments are in exchange-traded funds (ETFs) invested in Canadian dividend-paying shares, preferred shares and Canadian income trusts in a non-registered account. The average yield is 4.2% annually. The remaining 50% of his portfolio is in RRSPs and TFSAs that hold government and corporate bonds that yield 3.1%. Rick is eligible for full CPP and OAS at age 65. “I want to enjoy my grandkids and travel more to Europe and Asia,” says Rick. “I’m hoping my portfolio will be able to fund that.”

Rick is on track to easily meet his goal to retire Dec. 31st, says Janet Gray, a fee-for-service planner in Ottawa. “Rick holds ETFs and is a DIY investor so his fees are very low and that’s good,” says Gray. If Rick can maintain a conservative average annual rate of return of 4% on his $1.17-million portfolio, he will be able to draw a net after-tax income of about $55,000 annually for life and still have close to $1 million in net worth at age 90 (including the value of his home). 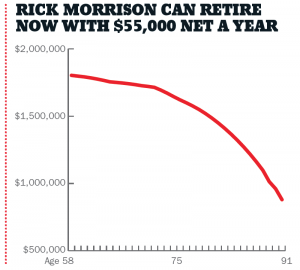 In order to take maximum advantage of the preferential tax treatment for dividends and capital gains, Rick should make withdrawals from his non-registered accounts until age 71, when he can convert his RRSP to a RRIF and make any future withdrawals from the RRIF. Gray recommends he take reduced CPP of $9,200 annually starting at age 60 and OAS of $5,700 annually at age 65—and to decrease the withdrawals from his portfolio to accommodate the extra retirement income. And what if Anne dies first and her $5,000 in monthly trust fund payments end? Or if Rick is still alive at age 90? “He can downsize his house and add the extra cash to his portfolio,” says Gray.

You may still qualify for the federal government’s CERB...

Some financial independence bloggers promote the idea that less...

Read Is early retirement a realistic goal for most people?