What does success mean to author Joseph Boyden? - MoneySense 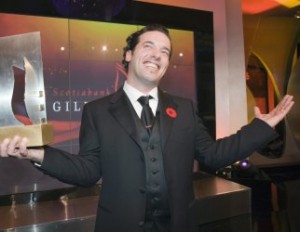 It’s relatively straightforward, I think, to measure monetary success when it comes to most careers: a university professor is granted tenure and will inch in on six figures before she retires; a fireman moves up the ladder, literally and financially speaking, from cadet to—if he’s lucky and smart—captain; a massage therapist with a steady clientele should never worry about paying the bills. But what about us artsy types? Specifically, what about writers? How do we measure monetary success in a realistic way?

I’ll tell you something I’ve never told anyone before, not even (until the writing of this article) my wife. I remember vividly the first time I thought of myself as monetarily successful. June of 2004. I’d just received the initial installment of the Canadian advance for my first novel, Three Day Road. As I removed my bank card from a downtown Toronto ATM, pocketing five crisp twenties and a statement that showed a balance bigger, by far, than I’d ever had, I thought to myself, ‘Joseph, gone are the days when you have to worry if you can afford to do this.’

I’d suddenly, without consciously recognizing it, become part of that economic group who had a little disposable income. And, to me, a financially paranoid man—due to a widowed mother who constantly threatened my many siblings and me that we were on a fast march to the poorhouse—this feeling was magnificent.

But, like all good things, what I’d come to think of as my very own warm and fuzzy security blanket was stripped crudely away from me the following spring. In hindsight, I was by no means rich before the taxman banged upon my door. I was far from it. Ridiculously so. That taxman, though, he took his pound of flesh and then some from a young artist naïve of things like income brackets. The fading scar he left, to this day, is a constant reminder.

For years before my first novel hit the shelves, I toiled—no, I slaved—at a teaching job in New Orleans. The money for the work was simply awful. My wife and I once figured out that our hourly wage as university instructors came to something right around minimum wage, but I would never have traded it for a job at McDonald’s or really, for anything else, other than the life of a writer. And then, when Three Day Road proved a hit in Canada and beyond, suddenly, the possibility presented itself. My wife (a novelist as well) and I crunched the numbers and realized that with our combined incomes we could actually do it. We could live the dream of every writer. We could, if we played it wisely, work only as authors.

There’s great trepidation, I imagine, for any person who leaves the comfort of a salaried job for the uncharted waters of self-employment. And this certainly holds true for a writer. You might or might not be surprised to know that very few writers, percentage-wise, live through the money made by their writing. Suddenly, you can no longer wait for the muse to strike, and the romantic idea of writing great odes by candlelight in the attic morphs into a nine-to-five job pounding a keyboard at the kitchen table. Insecurities about whether or not what you’re writing is good or crap are magnified with each month that the new bills arrive in the mailbox. I quickly learned that supplementing my royalties (an income that can vary widely each six months) with writing magazine articles offered a thin cushion. And certainly, I plan carefully now for that most depressing month when the taxman comes a-knocking. Basically, the life of the self-employed worker, writer or otherwise, means many early mornings of being woken by the niggling of self-doubt. But you push on. My wife and I, when we’re struggling with deadlines or with self-imposed writer’s block, only need remind the other that we’re doing it. We’re living our dream.

My wife recently had a health scare. Weeks went by when we suddenly saw the world through a different lens, and what had yesterday felt like givens were suddenly, we realized, blessings: health, each other, our future books. Thankfully, it turns out she was misdiagnosed, but I realized something I think is important. I’m not sure one needs to measure the average writer’s success in monetary terms. There are the Stephenie Meyers and the Stephen Kings on one end of the spectrum, and the self-published authors who actually lose money to see their work in book form on the other. Maybe judging success is as simple as holding the first copy of your book in your hands, still warm from the press. Yes. I think that’s it. The physical weight of your imagination held in your own two hands. Now that, I think, is success.