Making it as a single mom - MoneySense 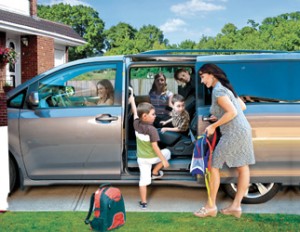 A year ago, Rebecca Panjay thought leaving her husband Felix would make life better. Instead, she’s facing a huge financial struggle. She has five kids, little in savings, and huge consumer and mortgage debts totalling over $400,000. Felix, who suffered from depression during their 16 years of marriage, never helped out much with the housework or the kids. Still, Rebecca never appreciated how important his $85,000 salary was to the family’s lifestyle. “Last month I did my budget as a single mom with five kids,” says Rebecca, who lives in Edmonton. (We’ve changed names to protect privacy.) “It was pretty depressing. I’m glad you can’t see the tears that fell on the computer keyboard.”

Before her separation last July, the 47-year-old dental hygienist and her husband had a combined household income of $140,000. Now, it’s down to $85,600. That includes $55,000 in annual earnings from her contract job, $22,800 in child support payments from Felix, and a few thousand in child tax benefits. “We still have a lot of things to work out—like how much of his pension I will be entitled to, and what evenings he will help out with the kids’ activities,” says Rebecca. “I’ve tried to arrange a mediation session but he’s passive-aggressive—and cheap. He’s afraid of all the fees.”

During their marriage, Felix seldom helped with family chores. “He’s only interested in the fun times with the kids—not much else. Ever since our twin boys were born five years ago, our marriage started stagnating. Felix got more and more depressed. I got more and more tired. We just grew apart until I finally said, ‘To heck with this—time for a big change.’”

The breaking point came last summer. Felix’s moodiness had become unbearable. So the couple separated, sold their sprawling four-bedroom house, and each bought a smaller home: Rebecca purchased a three-bedroom bungalow for herself and the kids, while Felix moved into a townhouse. And while Rebecca expected the breakup to be costly, she never dreamt finances would be this tight. “I ended up borrowing the part of the 20% down payment for the house—which cost $450,000—on my credit card,” says Rebecca. “I even had to put my parents’ names on title to get the mortgage. I’m now paying the $360,000 mortgage. I think I’ll be okay—but it will be tight, no doubt.”

Currently, with small RRSP and RESP contributions each year, Rebecca has barely $3,000 left after all expenses—a minuscule amount. “During our marriage we never really saved: we just bought bigger and bigger houses,” says Rebecca. “I want to change that.” Her list of financial goals seems modest: to pay off her credit-card debt, boost the kids’ education savings, get a retirement plan in place, and save enough to take the kids on a nice vacation before the older ones, now 13 and 14, finish high school. “My ultimate goal is to feel financially stable and be able to have some fun. Fun is something the kids and I haven’t had in a long, long time.”

In fact, Rebecca says some of the best times she had were in Abbotsford, B.C., where she grew up with her two older brothers. “My parents taught us how to have fun on very little money. Sports and family activities were always a priority for us.”

In 1991, Rebecca graduated from Edmonton’s University of Alberta with a degree in English, “but I didn’t do much with that.” Instead, she took a job as a receptionist in a dental office. In 1994, she met Felix, who worked as a supervisor at a local manufacturing plant. “He didn’t have a lot of debt but he didn’t have many assets either,” says Rebecca. “He hadn’t filed his taxes in three years and didn’t pay his bills until he had to. But he had a stable job with the same employer for six years.”

They bought their first home in 1996, and two years later moved to a larger one. They then had three children in quick succession: Marie in 1999, Jared in 2000 and Duncan in 2002. Rebecca went back to school and became a dental hygienist: “The best decision I’ve ever made.” They thought they were done having kids, but changed their minds: “Shortly after I graduated with my dental hygiene diploma in 2006, we had the twins, Patrick and Jayden.” 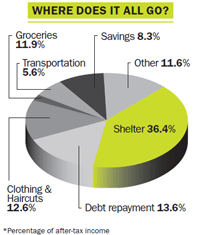 With a larger family came a still bigger house in 2007—and bigger expenses. But the couple’s household income was always more than $110,000, which is why Rebecca kicks herself at the missed opportunities for saving. “Felix was never interested in finances,” she says. “But I wish I had learned to save more. I would love to contribute to TFSAs and RRSPs regularly and just sit back and watch them grow.”

These days, as she rebuilds her life, her goals often seem overwhelming and she’s not sure where to start. She’s been contributing small amounts to her RRSP and wonders if, given her tight budget, this is just silly. “I have a huge mortgage to pay and the kids’ educations will need to come first. It’s all overwhelming.” In fact, she can withdraw the funds in her spousal RRSP in 30 months (where it would be taxed in her hands) and wonders if that would be a good idea. “Maybe I should take that money out and pay down some of the mortgage, or contribute it to the kids’ RESPs?”

She’s also set up two modest savings accounts to which she tries to contribute a few hundred dollars a year—a vacation savings fund and a Christmas savings fund. “With five kids, Christmas is an enormous expense,” says Rebecca. “I’ve told them it will be hard for me to provide gifts for them as in previous years. But they’re still hopeful—especially the little ones.”

Rebecca knows she will be entitled to part of Felix’s company pension but she’s not sure how much that will be. Her tax refund this year will be about $7,000, and Felix owes her $2,500 for some moving expenses. “I’ll use the $2,500 for dental surgery, but what should I do with the other $7,000?”

In the meantime, Rebecca is combing her budget for places to save money. “Clothes and haircuts seems high, but there are six of us,” says Rebecca. “Same with our restaurant bill. Every time we go out, even if we all drink water, it still comes to more than $60. It’s ridiculous but tough for me to say no.”

Sadly, working full time doesn’t leave much time for fun stuff. “From the minute I get home from work at 6 pm, I have two hours to spend with my youngest boys—and most of that time I’m cooking and cleaning up dinner.” Still, Rebecca says the family makes up for it on weekends. “Felix tries to spend time with them, but he’s unpredictable. I try not to let them down. We skate, swim in the local wave pool, have Friday movie nights, and we all take karate classes. It’s good for the soul. I want to give them a great childhood but I’m a realist. I know I have limited choices and am determined to make the best of the little we have.”

Rebecca Panjay should be commended for taking a bold step and changing her life. While she has challenges ahead, she possesses one key trait that will help her achieve financial success. “Great attitude,” says Annie Kvick, a certified financial planner with Money Coaches Canada in North Vancouver. “She’s decided to take control of her money and not have it control her. Going forward, that will play an important part in her success.”

Mary Prime, a fee-only adviser in Toronto, agrees. “She knows the money is tight but she’s smart about her expenses and is somewhat money savvy,” says Prime. “With the right priorities and some good old-fashioned discipline, she’ll achieve her goals.” 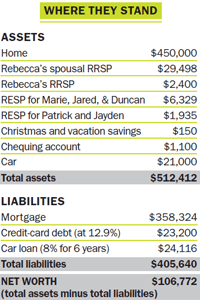 Here’s what Rebecca should do:

Pay off the consumer debt. Right now, Rebecca has $23,200 in credit-card debt as well as a $24,116 car loan. She should take her expected $7,000 tax refund and apply it all to her consumer debt. “That alone will leave her with a more manageable $16,200 in credit card debt and save her $900 a year in interest payments this year,” says Kvick. Next, Rebecca should apply the $2,400 she’s now putting into her RRSP to the debt, along with the roughly $3,000 surplus she has after all her expenses are paid.

Consider a line of credit. If Rebecca has paid her bills on time for a few months, she may qualify for a line of credit of $10,000 at about 6%. She should use this to pay off her credit card debt, which is now at 12.9%. That move could save Rebecca $1,600 a year in interest. One caveat: Rebecca has to be disciplined. “Keep up the regular debt repayment schedule and don’t dip into the line of credit unless it’s an emergency,” cautions Kvick.

If Rebecca doesn’t qualify for the line of credit, she has an alternative. She should call her credit-card company and ask for a lower rate. “Just by calling and asking they may be able to lower it—maybe even on the spot,” says Kvick. “Every little bit helps.” If Rebecca does all this, the credit card debt will be paid off in two years instead of four. Her van payments can stay as is for the length of the car loan.

Get a good mediator. “The kids’ interests need to be put at the top of the list,” says Prime. “Get Felix to contribute to the RESPs on an annual basis. Even a few hundred dollars a year will help.” Rebecca should also ensure that Felix’s company pension is evaluated and the split made. “If it’s an indexed defined benefit pension plan, she should leave her share in the plan and collect it at retirement.”

Get free money for the kids. Rebecca should start researching student loans, scholarships and grants for her kids’ postsecondary education. She should also encourage them to work part-time to help out with tuition. “Have the kids take paper routes, babysitting work or jobs at McDonald’s,” says Barbara Garbens, a fee-only adviser in Toronto. “The most important thing she can do is empower them to make a financial contribution to their education.”

Allocate future savings wisely. Don’t touch the spousal RRSP, says Garbens. “This is her emergency fund, so she shouldn’t touch it.”

Rebecca should continue the $900-a-year contributions to the kids’ RESPs. Once her debt is paid off following our experts’ advice, she’ll have an extra $10,500 a year to allocate in various ways. About $3,000 should go to her TFSA, another $3,000 to RESPs, and the remaining $4,500 for a family trip before the eldest leaves for college. “Her tax rate is so low, so she should forget RRSPs for now,” says Garbens. “Stay out of debt. TFSAs and RESPs—and a little for family fun—are where her money should go. Keep on schedule with the mortgage payments and at age 62, once the kids are all gone, Rebecca will be able to downsize to a small condo.” With Canada Pension Plan, Old Age Security, some TFSA savings and a small company pension awaiting her, Rebecca will be able to count on a fairly comfortable retirement.

Would you like MoneySense to consider your financial situation in a future Family Profile? Drop us a line at [email protected]. If we use your story, your name will be changed to protect your privacy.