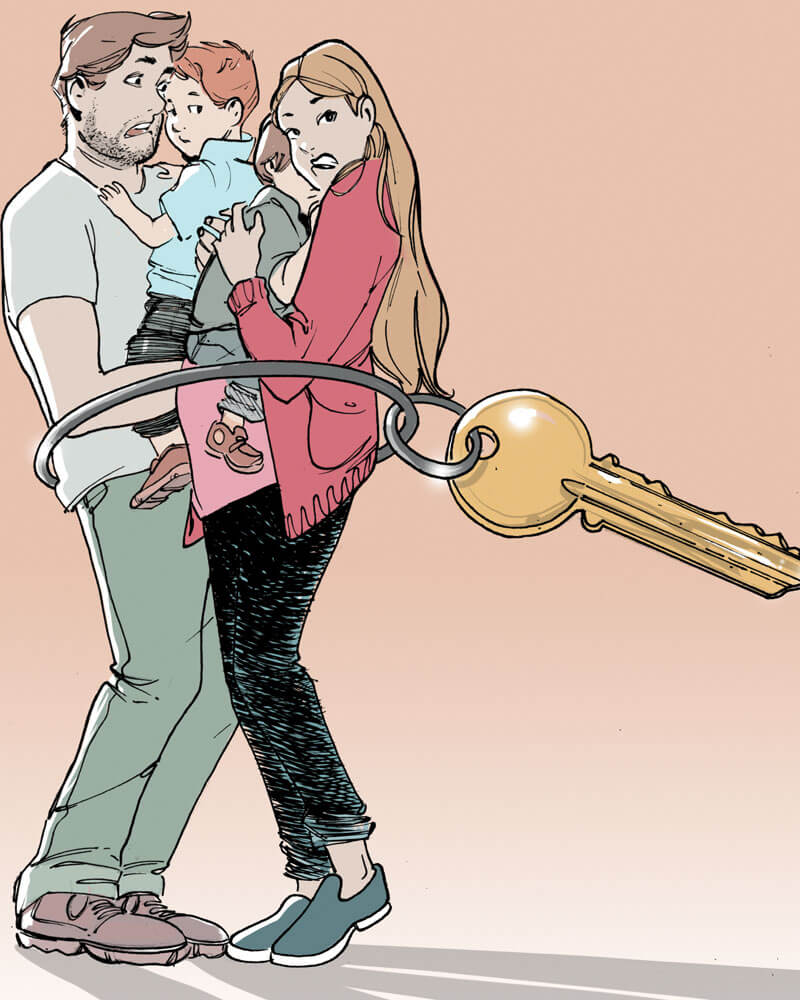 Julie and Noel Bond seemed well on their way to realizing the Canadian dream when they moved east of Vancouver to the small community of Mission in 2014 so they could afford a three-bedroom house for their growing family. They now have two pre-school children and are expecting a baby in March.

While Julie plans to stay home to look after the kids for a year after the baby’s birth, the couple face a tricky financial dilemma over what to do after that. For Julie to return to her part-time $30,000-a-year teaching job would be pointless because her entire paycheque would be eaten up by child-care costs. But the $80,000 a year Noel earns as a railway worker isn’t enough by itself to cover the mortgage and other expenses if Julie stays home to look after the kids. Whether Julie, who is 36, returns to her old job or stays home, they expect ongoing expenses to exceed take-home pay by about $1,000 a month. That leaves Julie looking for solutions and wondering, “What will my family do?”

Caught in the crunch

The Bonds are in the midst of what many Canadians find to be the most challenging interval on the entire road to retirement, a period sometimes referred to as the “crunch” years. You may experience its bite after buying a house and starting a family, when you shoulder the dual burden of a huge mortgage and expensive child care costs. While the crunch has been a fact of financial life for decades, it has bitten deeper in recent years as house prices have continued to escalate in major cities like Toronto and Vancouver. In what follows, we’ll describe the crunch and what you need to do to get through it. We’ll also show you what help government provides and compare it to benefits for seniors, while raising the challenging question of whether more should be done.

Driving the crunch these days is the fact that soaring house prices have changed the fortunes of older and younger Canadians in a very different fashion. They have enriched the net worth and eased the path to retirement for those old enough to have bought homes before much of the run-up, while burdening younger Canadians who are new to the housing market. “Housing has become a generational tipping point in Canada these days,” says Paul Kershaw, executive chair of the Association for Generational Equity (AGE), an advocacy group for Canadians in their 20s, 30s and 40s. “The squeeze is so significant that it is transforming expectations with respect to home ownership, even for talented, successful, well-educated young people,” says Kershaw.

It’s not just advocates from a younger generation who think so. “I think they have a real point,” says Malcolm Hamilton, a retired actuary and fellow with the C.D. Howe Institute, and one of Canada’s foremost retirement experts. “In what kind of country can a couple (like the Bonds) with $110,000 in income not be able to afford to have a house and two children? And yet there are parts of Canada where that’s a real challenge,” he says. “We’re very miserly in our support for poor struggling young people. Yet we treat seniors much, much better and have for decades.”

When it comes to the crunch, we need to rethink what “high income” means. While couples with low or average incomes and children may be priced out of a house purchase altogether in the more expensive housing markets, even couples like the Bonds with incomes over $100,000 can struggle. “They’re more or less viewed as privileged people who can afford mortgages and children,” says Hamilton. But despite high gross incomes, what’s often left over after paying the mortgage, debts, child-care costs, income taxes and other costs is liable to leave them in difficulty trying to make ends meet. “Even with incomes of between $100,000 and $150,000 in Toronto or Vancouver, you’d better think it through because housing is expensive, the payments are going to be large and daycare is expensive, too.”

When applying for a mortgage, it’s surprisingly easy to take on more than you can afford if you also have kids soon after. That’s because financial institutions generally base their test of income sufficiency on two ratios (known as the “gross debt service” ratio and the “total debt service” ratio) that don’t take into account child-care costs. That means if you take the biggest mortgage the bank will give you and you don’t have kids, your finances will probably feel tight but okay. But then if you have a couple of kids and start paying hefty daycare costs (or drop one of the incomes), that can easily put you over the edge of what you can afford. “They aren’t a good limit for people who are going to have children,” says Hamilton.

The result is a potential financial trap for the unwary. To show what can happen, we’ve created a budget for a fictional couple we’ll call Amy and Tyler Spencer. We enlisted

the help of chartered professional accountant Ali Jaffer and staff at AR Jaffer Professional Corporation to calculate taxes and benefits for 2015. The Spencers live in Toronto and earn a little bit more than the real-life Bonds. They have combined salaries of $120,000 (one spouse earns $80,000 and the other earns $40,000). They have taken on as big a mortgage as their financial institution will allow in order to buy the best house they can for their kids. They have two preschool-aged children in private daycare and pay $26,000 a year in fees, a typical amount in Toronto these days. We put together a fairly bare-bones budget for them and found they ended up with a shortfall of more than $10,000 a year.

That means you have to plan for the crunch years at the start. “You have to think through at the point you buy the house, how many children are you going to have, and how you are going to care for those children until they go to school, and how much is it going to cost?” says Hamilton. “If you wait until later to figure it out, you may have painted yourself into a corner.”

Getting breaks and benefits

To be sure, the government provides a number of benefit programs or tax breaks for families with children. While these programs certainly help to a significant degree, they give the impression that governments are doing more than they really are. “I would describe them as boutique programs designed to get headlines, not actually make excellent public policy,” says Kershaw. To show this impact, we calculated the family benefits and tax breaks that the Spencers would receive as well as the overall taxes they pay, also with the help of Jaffer.

The Spencers received three specific tax breaks worth $6,188 and money from two family benefit programs worth $4,410 before taxes. While that helps, it’s a lot less than the $26,000 they spent on daycare. Despite the tax breaks, their overall income tax bill net of benefits was just under $15,000. While the Spencers are struggling with heavy mortgage and daycare costs, their relatively high income makes them a magnet for high income taxes. “Government confuses large income with high standard of living,” observes Hamilton.

Seniors get all the tax breaks? »

To get through the crunch, initially you need to focus on just keeping your financial head above water and then pay off debts when you can. Usually financial conditions gradually get better on their own accord. Salaries generally go up at least by inflation and you may get promotional increases on top of that. Mortgage payments generally stay flat. Gradually your mortgage payments build home equity at a compounding rate. Child-care costs decline as your children reach school age and eventually will end completely when they get older.

“The priority is get out of debt as quickly as you reasonably can,” advises Hamilton. “If you have more than one debt, try to have it in the place where the interest rate is lowest.” Few people at this stage can save for retirement, but that’s okay, despite lots of hectoring to the contrary from the financial industry. After you get through the crunch years, you’ll have to make saving a priority, Hamilton says.

Meanwhile Julie and Noel Bond are looking forward to welcoming a new baby into their young family, which also includes Jaya, 4, and Zackary, 2. Julie, who is 36, plans to stay home to look after the kids during the new baby’s first year and she expects that Employment Insurance Maternity and Parental Benefits should roughly cover the shortfall in their finances that would otherwise occur. After that, she realizes they need to figure out something else to cover the financial gap.

The Bonds are carrying a sizeable debt load from their mortgage, a vehicle loan, a student loan and credit card debt, with minimum payments totalling about $37,000 a year. They’ve already pared their discretionary expenses about as far as they can, so they realize they need to find some combination of more income or cheaper daycare costs.

While turning things around won’t be easy, they have lots going for them. Noel, who is 40, has a promising railway career, and hopes at some point to move up from conductor to a better-paying position as a locomotive engineer. Requirements for parental care or paid daycare will gradually diminish as the kids reach school age.

Julie has strong job credentials including a Master’s degree and 10 years’ experience in teaching english as a second language (TESL). Her half-time position (four partial days a week with a school board in the Lower Mainland area outside Vancouver) doesn’t pay enough to cover daycare for three children, but she is still hoping to find a full-time teaching job with a daycare-friendly nine-to-four schedule. (The TESL norm is contract or part-time work with irregular hours, including evenings. Noel works rotating shifts and can’t commit to parental child care at set times.)

If she isn’t able to find that kind of position, she has a fallback plan until her children reach school age. She estimates she can roughly cover the shortfall by providing paid before- and after-school child care in her home while also looking after her own kids. While she might want to return to teaching one day, she realizes she needs to do what’s necessary to make ends meet. “Being home with young kids and providing child care is just one chapter in my life and there are many more chapters yet to be written,” she says.