Some savvy real estate advice paved the way for a fruitful new life.

When Paul Richardson of West Vancouver wrote us back in the fall of 2004, his life was falling apart. After an expensive divorce settlement with his then-wife Anna, Paul’s biggest goal was being a good dad to his three kids, then ages 11, nine and eight. (We’ve changed names in all six profiles.) Paul loved the time he spent with them but was feeling financially suffocated. “With child support payments, a huge mortgage and daycare costs, some days I can’t help but feel trapped,” he said at the time.

Paul’s divorce had restricted his ability to rebuild his life and he was coming to the realization that his whole marriage had been an expensive disaster. At the time, he was earning a healthy $83,000 a year, plus overtime. But with so many demands on his money, he was having a tough time seeing how he could do anything but scrape by for years to come. He was especially concerned because he felt he wouldn’t be able to pay off his mortgage until age 70 if he kept on the same financial course. Paul’s job had grown stale and he sensed he should move on to something else, perhaps in another city. Still, he wanted to be close to his boys so he could watch them grow up.

His one piece of good fortune was that he’d bought a two-bedroom condo in a nice neighbourhood. It was close to one of Vancouver’s best schools and proved invaluable when the opportunity came to reunite with his boys, at least temporarily, after Anna remarried and moved to Ireland with her new partner. He wondered if selling his condo for a larger but less expensive property would be a good move, as doing so would net him a $125,000 profit. The money from his condo would also insure that the huge mortgage payments he was paying wouldn’t constrain his lifestyle for 20 more years. As well, it would help him start saving for retirement. But one thing was sure—he didn’t plan on having any other permanent relationships with women. “Believe me, I’ve learned my lesson,” were Paul’s final words to us.

10 years later. “In a perfect world, I’d be retired,” says Paul, now 58, “but I’m actually much more engaged in life then I’ve ever been.” Immediately after our interview, Paul got a job with the B.C. government, and has been a member of its defined benefit pension plan for 10 years. He also found his life passion—biology and ecological restoration. He’s been taking evening courses and eventually plans to earn a Masters in biology when he retires in three years.

More good news came Paul’s way in 2007, when his ex-wife remarried and moved to Ireland. All three of his kids came to live with him full time, in part because the schools in his neighbourhood were outstanding. His daughter is now in university and his two sons are just finishing high school.

Last year, a big payout from his employer also reaped benefits. The government was buying out banked sick-day provisions for various groups and Paul received a lump sum payment of $53,000. He used $13,000 to pay off his mortgage and the rest to top up his RRSP. That turned out to be a great move because Paul hadn’t made any RRSP contributions between 2004 and 2007.

Certainly in Paul’s case, the vow not to get involved in any ‘permanent long-term relationships with women’ proved to be famous last words. Last year he remarried and he and his new wife Mavis, 39, are expecting their first child this July. Paul is excited to start a new family and says that, thanks to MoneySense, he’s now in the best financial shape he’s ever been in. “The best advice I got from the experts was to keep my condo and make paying down the mortgage a key priority. I maximized weekly payments and honestly, didn’t feel it much. I just ‘set it and forget it,’ and that kept me grinding away slowly at my mortgage. I made it the cornerstone of my financial plan and that’s made all the difference to my financial success.” 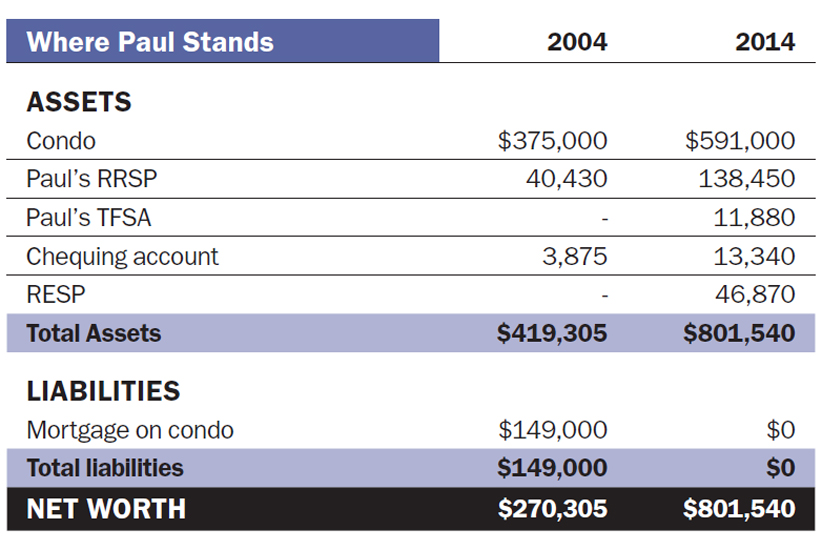