This single guy dreamt of retiring at 45 to travel. Portfolio diversification is the key to making his funds last.

We met young entrepreneur Frank Mancini eight years ago when he was running his own convenience store in Port Alberni, B.C. A self-confessed micromanager who didn’t mind getting his hands dirty, at age 33 Frank was making $126,000 per year and had a net worth of almost $600,000. But he felt pigeon-holed by his job and dreamt of retiring at 45 to see the world. Frank felt that goal was within reach, because he was single, had no dependents and planned to keep it that way. He figured he was on his way to a seven-figure nest egg by age 45. Still, he wasn’t absolutely sure how much he would need for his super-sized retirement. “I’m not an extravagant spender,” he told us back in 2006. “But I really don’t know how much I will need to finance several years of living abroad.”

At the time, nearly every penny of his money was tied up in his business, his home and a mortgage on a commercial investment property. He knew that at some point he could sell his store and home for at least $1 million once he retired. Then he could put the proceeds into a standard mix of conservative mutual funds. But he didn’t feel totally comfortable with that solution. Stocks and mutual funds seemed volatile to Frank and after paying commissions and MERs, he wasn’t sure how much money he’d actually make. The key was that Frank liked control and had never invested in anything he didn’t run himself.

Our experts both felt Frank had done many things right and that he had a lot of options, even though his $1 million would have to last a lifetime. Any good plan for Frank would involve diversifying his assets: everything was tied up in real estate on Vancouver Island, which left him vulnerable to any local downturn. They advised him to keep a portion of his portfolio in stocks, bonds and mutual funds, since they could generate an income stream to which he’d have access anywhere in the world. They also advised him to find a good fee-for-service financial adviser.

8 years later. When we caught up with Frank last month, he was in the midst of big changes. He was selling his business, including the land and the building, which will net him $824,000. “I never bought stocks and just kept on the same course,” Mancini says. “I was skeptical and the risk was too great for me.” In fact, he bought a rental property near his store in 2008 for $200,000. It carried itself since then and he’s now selling it for $260,000.

More importantly, Frank has rekindled an old romance with the woman of his dreams and is planning to move to a small town on the other side of the island. “I’d known Becky in university. When she divorced her husband three years ago we got back together so I’m pulling the plug on everything here,” says Frank, now 41. His net worth stands at over $1.3 million.

His plans for the future? “I have a bucket list: Egypt, Greece, England, Antarctica. I want to travel with a good buddy and visit every continent in the world.” As for investing the rest of his liquid cash, he’s not sure. “Part of me wants to buy another small business. My stock investment plan is to start small—maybe $50,000—and see how it goes.” 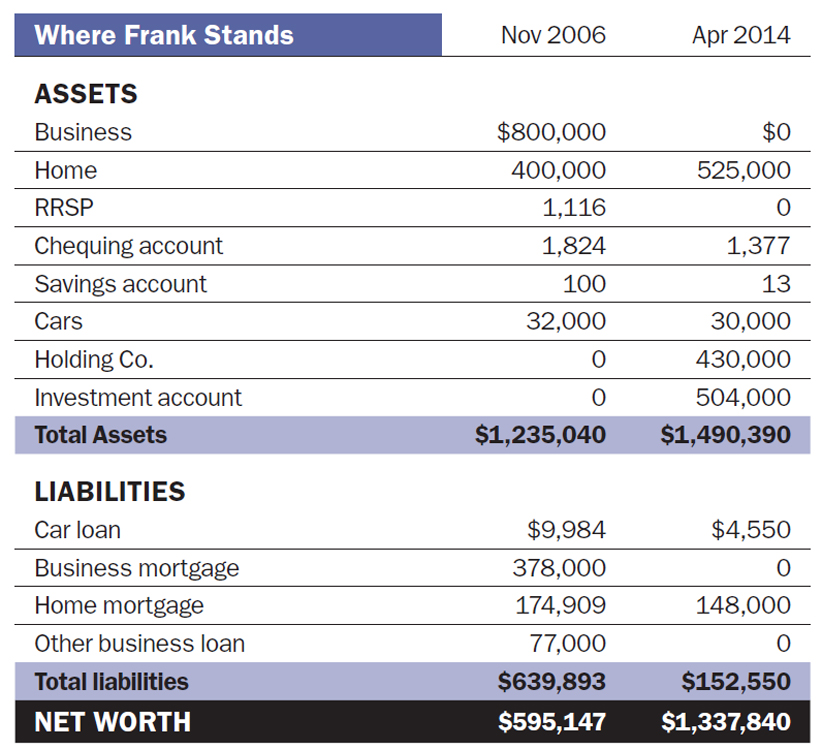