How to establish a scholarship fund

Can this couple make their dream of creating a $200,000 endowment fund a reality?

Justin Langlois, 30, and his wife, Danielle Sabelli, 29, recently moved to Vancouver. He’s a professor at a local university, while Danielle, who is currently articling at a law firm, plans to open her own practice when she finishes in a year’s time. Together, the couple earns about $100,000 annually but expects to increase that to $130,000 in a couple of years. Their only debts are a $297,000 condo mortgage and a $5,000 RRSP loan—obligations they’ll have no problem paying off as they don’t plan on having any children. “Post-secondary school was a good investment for us,” says Justin. “We want to support other students who want a good education but don’t have the money.”

That’s why the couple has a unique goal. They’d like to set up an endowment fund that would give out scholarships annually to a few civic-minded students. They’ve just started contributing $100 a month to a savings account and hope to contribute $10,000 or so annually starting in two years. By 2029—or 15 years from now—they’d like to have at least $200,000 in the plan, or enough to fund two to five scholarships totalling about $15,000 a year in perpetuity. Are they on track to do so?

To meet their goal, Black advises the couple to bump up their contribution rate to $12,000 a year starting in 2016. “Increasing their contribution by just $2,000 will do it,” says Black. Then, in 2029, Justin and Danielle can give the whole amount to a memorial scholarship fund at a university of their choice. “The university will then pool their money with other similar bursaries and manage it for them, but Justin and Danielle can still decide how the scholarships are disbursed,” says Black. At that time, they will also be entitled to tax credits that could result in refunds of up to 43% of their salary in the year the credits are claimed. “Those credits can be carried forward five years from the time of the handover, so they should see a tax accountant at that time, and also consider donating any refund,” says Black. 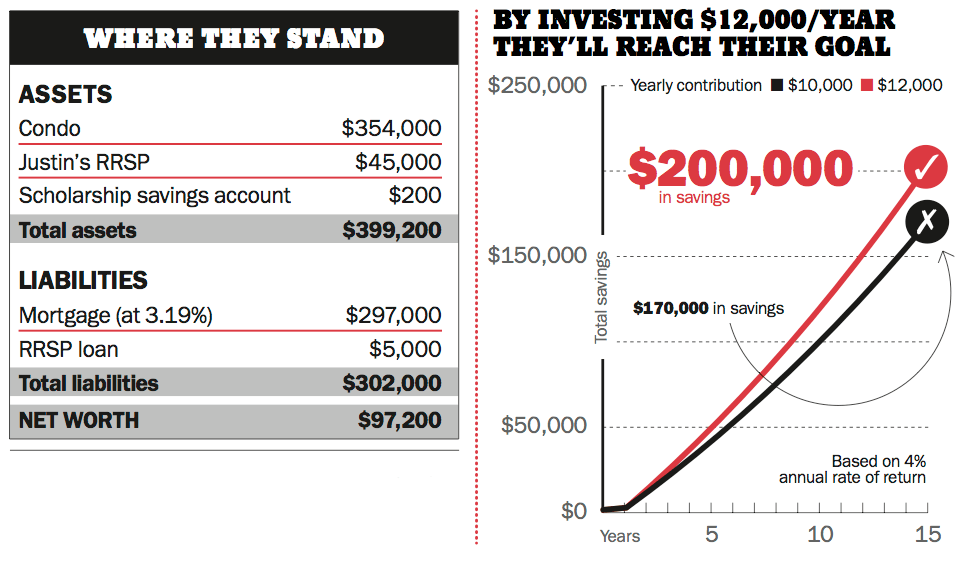