They turned it around by following sound financial advice.

Margaret and Ben Francis were living large when we first met them in 2003. The Montreal couple earned a high combined yearly income of $240,000 and had no kids. But then came a job loss for Margaret, as well as some sour investments for the couple. Their new sense of vulnerability was causing them to rethink their finances, as neither had a company pension to fall back on and losses in their RRSPs threatened to capsize their retirement plans. “It’s time to get humble,” said Margaret, 44, who oversaw the couple’s investments. “I was good at my job but maybe not good at managing RRSP money.” Worse, when two of their stocks—Bombardier and Nortel—began sliding precipitously, they never got a call from their stockbroker. “Because of that, we’ve lost quite a bit of money,” said Ben, 55, at the time.

The couple wondered whether a more frugal existence was the only way to achieve their goal of retiring in five years. In many ways, theirs was a marriage of opposites. Margaret, a high earner, was a full-fledged shopaholic while Ben was the careful budgeter. It wasn’t all bad news, though. Financial setbacks aside, they had built an impressive list of assets with a net worth of $884,000. But they still had a mortgage on their Montreal home and on their Calgary rental property—a duplex the couple had bought four years earlier, before the advertising company that employed Margaret transferred her to Montreal. The Calgary property cost them about $4,000 a year to carry after rental income was factored in. They wanted to know if the proceeds from selling the duplex should be used to pay off the mortgage on their Montreal townhouse. They felt their newly hired adviser wasn’t helpful with any of the decisions they were trying to make.

10 years later. Selling their Calgary duplex and putting the proceeds towards the mortgage on their Montreal home—a recommendation from our experts—went a long way towards alleviating the couple’s stress. “Managing a property long distance wasn’t for us,” says Ben, now 66. A month after the profile, Margaret landed a new sales job paying her $125,000 annually for a four-day workweek. “I slowly went down to three days a week in 2009,” says Margaret, now 55. “But two years later they wanted me to move to Toronto. At our age, that would have been foolhardy so I fully retired in 2011.” Ben, meanwhile, met his goal of retiring in 2008, as planned.

In 2007, the couple boosted their savings by investing 50% of each of Margaret’s pay cheques. By then, they had taken our experts’ advice to find a new adviser. And as their investment accounts grew, so did their confidence in the new adviser. “When he said he would buy for us what he would buy for his own mother, we knew we had found the right person to manage our money,” says Ben. Today, their portfolio is made up of 60% equities and 40% fixed income, an investment mix originally recommended by our experts. “That was the best advice,” Ben says. “It really focused us on building a solid portfolio that would take us right into retirement. It has kept us on track to build a sizeable nest egg. ” 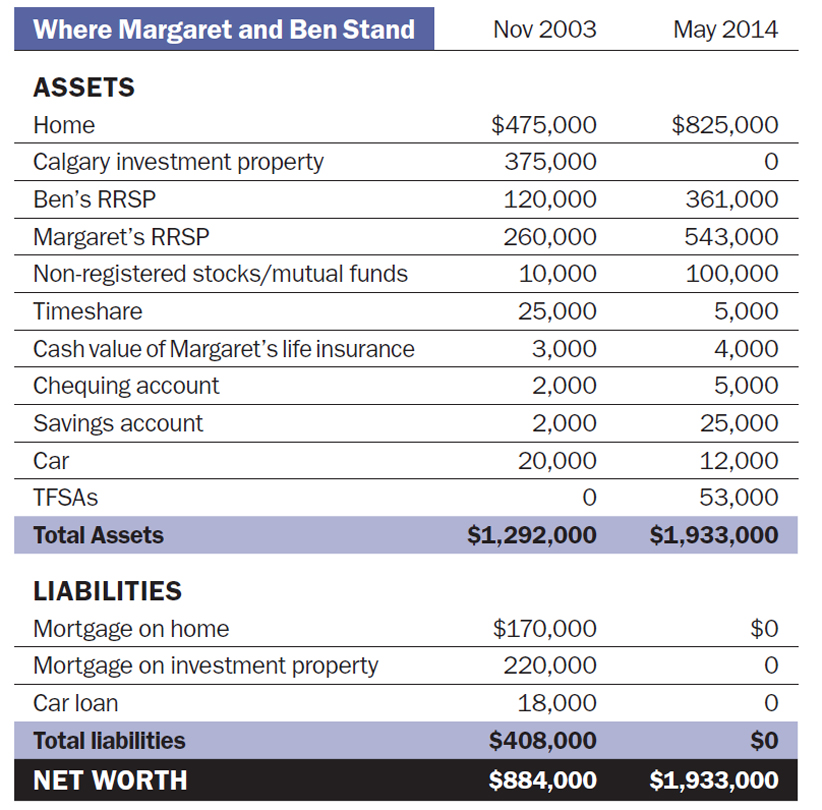