How to fund a family vacation

The Goldmans have a mortgage, daycare bills and a savings plan.

Derek and Rhonda Goldman were ecstatic when their newborn daughter Matilda arrived earlier this year. Big sister Kristen, four, also loves having the baby around, but life has certainly become more hectic. “We had got to the point where Kristen would sleep through the night and get her own cereal each morning,” says Derek, 39, a supervisor in a printing plant in Burlington, Ont. “With the baby, we’re now back to sleepless nights. It’s easy to forget how tough it can be but we’re trying to adapt.”

The arrival of Matilda has made the family’s financial life more complicated as well. “We have to look at our financial plan again,” says Rhonda, 35, an executive assistant at a legal firm. “I’m returning to work next month after my second maternity leave and we’re trying to figure out how we’re going to pay off our mortgage, pay for two daycares, save for our children’s education and our own retirement while still having a little left over for a big family vacation in three years. How do other young families do it?”

Like many couples their age, Derek and Rhonda are faced with a long list of financial priorities. Never have there been so many demands on their income. Luckily, they earn a combined $136,000 annually. But a big chunk of their after-tax income is eaten up by their mortgage, the $3,900 in annual payments on their car loan, and a staggering daycare bill of $22,700. “Right now we feel like we’re just surviving,” says Derek. “The cost of having two kids in daycare is astronomical and makes our budget very tight. We weren’t ready for this.”

The Goldmans (we’ve changed their names to protect their privacy) have always been diligent savers and are in a strong financial position. Despite their young ages, they have already managed to pay off a big chunk of their mortgage and saved more than $100,000 in RRSPs, RESPs and TFSAs. Until now, they focused on saving for retirement and their mortgage. They had even been on track to pay off the mortgage by 2026 because they had been making extra payments of $250 a month for the last three years. However, “we’ve stopped making those accelerated payments for now, so we’ll have it paid off by 2031,” Rhonda says. “We want to pay off our mortgage more quickly. I just don’t know if that should be a priority now.”

The four questions most worrying the Goldmans are typical of young couples. The first is whether they should focus on paying down the mortgage or build up their retirement savings. The second is whether they need an emergency fund: right now, the couple needs to spend $6,000 on appliances but aren’t sure where that will come from. “We need a new stove, fridge and dishwasher, as well as bigger beds for the girls,” says Derek. “Ideally, we’d like to have $18,000 in an emergency fund. You just never know when a big repair will sneak up on you.”

The couple’s third question is how they should save for a big family vacation. “We’d love to take the girls to Disney World in three years,” says Rhonda. “We’d need at least $4,500 for all of us to do that.”

Finally, the Goldmans wonder whether they’re saving enough in their daughters’ RESPs. They are contributing their Child Tax Benefit cheques (about $100 a month for each child) plus any gifts the kids receive from friends and family. “We’d like to contribute more but there’s only so much money to go around,” Rhonda says.

Derek and Rhonda both come from families that knew the value of a dollar. “Money was tight but we got by,” Derek says. “I remember my parents turned down braces for me because there was no money.”

Rhonda was raised in a religious family and her parents were also good with money. “I always felt like we didn’t have any money but now I know it’s because my parents gave a lot to local charities and invested for their future. They believed all debt was bad and that the important thing in life was to love people and help others.”

Derek got a Bachelor of Arts degree from McMaster University and a diploma in electronics from George Brown College in Toronto. He worked at a gas station and as a waiter and security guard in university. “After six years of post-secondary school, I graduated with $17,000 in student loans and paid them off in three years.”

Rhonda got a commerce degree from the University of Western Ontario. With a good summer job at Canadian Tire, she graduated with no debt and about $3,500 in the bank. “It was a relief to start my career with no debt.” In 1998, Derek got a job at a phone company, while Rhonda began work as a junior accountant. In 2002, the couple met at a friend’s New Year’s Eve party, then got married in 2004. “We had a lot in common from the beginning,” says Rhonda. They bought their $240,000 condominium townhouse in 2006. It still has a $152,400 mortgage locked in at 2.89% until June 2018. They recently extended the amortization period to free up more money for child care costs. “We knew we’d be squeezed for a while and renegotiated our mortgage with that in mind,” says Derek.

The Goldmans are also confused about whether they should focus on the mortgage or top up their retirement savings. Both Derek and Rhonda are paying back loans from their RRSP Home Buyers’ Plans and the money is taken right off their paycheques.

They have a total of $16,560 left on the balance and will have that paid off by 2023. Rhonda’s employer offers a group RRSP, which the company matches dollar for dollar to a maximum 10% of her salary. She’s been contributing $5,600 annually (deducted from her pay monthly) and is eligible to contribute up to $7,300 a year based on her $73,000 salary. The group RRSP contribution is invested in a balanced fund that returned a measly 1.53% over the last year. “I’m not happy with it and have never really checked its return until now,” Rhonda says. She acknowledges she’s contributing quite a lot to the plan, but says “the matching I get with my employer is so good I’d hate to give it up.” Still, she wonders whether she should reduce her RRSP contributions and pay down the mortgage instead.

Meanwhile, Derek has been a member of a defined benefit pension plan at work for 12 years. The pension contributions leave him with little RRSP room.

The biggest challenge is building up their emergency fund. “We’ve been using our TFSAs for emergencies,” says Rhonda. They had to withdraw $5,000 to buy a van, which drained Derek’s TFSA to zero. That leaves only Rhonda’s TFSA with $11,000. “I’d like to replenish Derek’s TFSA and get it back up to $10,000,” she says.

Looking ahead, the childcare expenses won’t wreak havoc with the couple’s finances much longer. They will have to pay $13,200 a year for Matilda until she’s four years old, but then the cost will drop to $8,700 for seven more years. “There will be $4,500 in savings when Matilda starts kindergarten, then more savings when they each reach age 11,” says Derek. “That will help.”

Some years the Goldmans may also get extra money from Derek’s bonuses. In the past he got several thousand dollars but doesn’t expect to see a dime this year because sales have been declining. “We usually divvy up the bonus where we need it. Last year we put the full $5,200 down on the new van.”

The Goldmans want to retire in their 60s, but that’s a long way off. “I just dream of the day we’re daycare-free,” says Rhonda. “It will make our financial life much more manageable.” Until then the family is happy doing the simple things in life—going to the park, having picnics and watching the odd baseball game. They also relish the time they spend at Derek’s parents’ cottage each summer. “When they’re older we’d love to introduce the girls to theatre,” says Rhonda. “That will be fun. We can’t wait.”

Derek and Rhonda Goldman feel overwhelmed, but for a young couple with two children they’re in a good financial position. “They’re just confused because there are so many moving pieces in their life now, but they’re doing well,” says Barbara Garbens, a fee-for-service financial planner in Toronto.

Annie Kvick, a Money Coach in North Vancouver, agrees. “They are juggling so many different demands on their money, so just breaking even is really great.” Kvick feels the key for the Goldmans is simply to prioritize their goals and make a plan. They should do the following.

Build an emergency fund. The Goldmans’ top priority should be socking away some cash to cover three months of expenses. “That would be about $21,000,” says Garbens. “They can use the TFSAs to hold their emergency fund for now. Any bonuses or tax refunds should go there.”

They may also want to consider cutting their annual charity donations from $7,000 to $2,000 for a couple of years. “Instead, they can volunteer more of their time for those years,” says Garbens. “They can put that money in the TFSAs and use it to purchase appliances or for an emergency.” 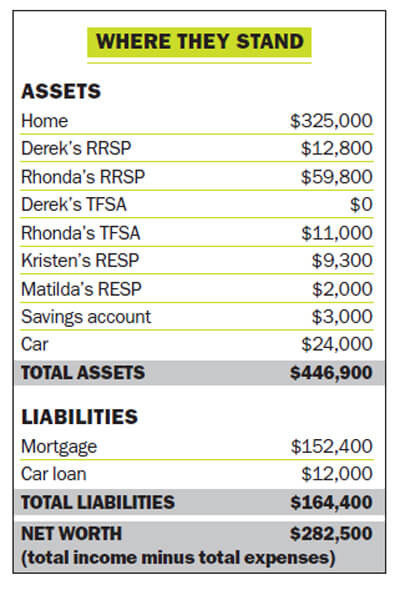 Max out Rhonda’s group RRSP. Derek doesn’t need to make RRSP contributions for now, since he has a generous defined benefit pension plan at work. But Rhonda should take full advantage of her group RRSP. “It’s free money and she’s getting 100% matching from her employer,” Garbens says. “You really can’t top that.” Rhonda should review the mutual funds offered and choose a simple, low-fee option. “She could hold about 35% in a fixed-income index fund and 65% in an equity index fund,” Garbens says.

Top up RESPs every year. The Goldmans already contribute $1,200 a year to each girl’s RESP, but both experts feel they should try to kick in more. “If they contribute $2,500 per child every year they’ll get the 20% government grant annually,” Kvick says.

Start a vacation fund. When Canada Pension Plan contributions and other payroll taxes end every year—usually by early fall—Kvick advises the couple to redirect that money to a vacation fund. That should total about $1,500 a year between them. At the end of three years, they’ll have $4,500 to put toward a family trip to Disney World.

When the daycare bills start winding down in seven years, they can “throw big chunks of money into the mortgage and TFSAs,” Garbens says. “Seven years from now, they’ll be in good financial shape. That seems a long way off, but it will really whiz by.”

Julie Cazzin is an award-winning business journalist and personal finance writer based in Toronto.

Would you like MoneySense to consider your financial situation in a future Family Profile? Drop us a line at [email protected]. If we use your story, your name will be changed to protect your privacy.

John's advisor seems impressive, but he's left out an...

Sandra and her husband have lived in their principal...