Investors see value, but why won’t they act on it?

There has been considerable debate about the relative merits of traditional active (alpha-seeking) strategies and traditional passive (beta-replicating) strategies. Which paradigm of the original two formats has the most merit? How do they compare? What do investors want and need—and are advisors doing enough to meet those needs?

More specifically, I’m particularly curious why on earth investors keep going to higher-fee active investments when lower-fee passive strategies are demonstratively better for them? And why aren’t advisors stopping them?

I just finished Michael Lewis’ new book The Undoing Project about the alchemic bromance between Amos Tversky and Daniel Kahneman—the fathers of behavioural finance. Kahneman and Tversky showed that some of the most basic assumptions in economics were simply not true.

Specifically, they debunked the notion that individuals make consistent and rational decisions to benefit their own self-interest. Traditional economists describe these people as utility maximizers. Instead, they showed that people usually make decisions that work to minimize regret. These competing theories have led to two primary investing paradigms (active for utility maximization, passive for regret minimization).

(There is a third investment paradigm called factor-based investing [sometimes called “Smart Beta”], which falls somewhere between active and passive strategies, but we won’t consider that for the purposes of this discussion.)

Before we go any further, let’s remember that investing is a zero-sum proposition. At the risk of oversimplifying, there is a loser for every winning trade. Here’s a simple depiction that I use in my book The Professional Financial Advisor IV.

Option A (for Alpha-seeking) is predicated on finding the positive outlier (outcomes at the extreme right end of the distribution). 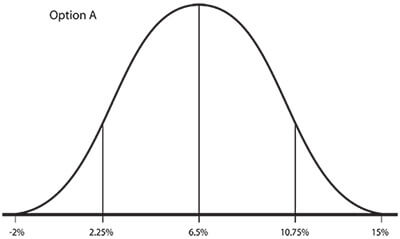 Option B (Beta-replicating) is predicated on mimicking a market. 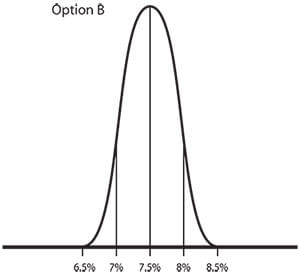 In my examples I’ll use a market return of 8% and then deduct the average cost of the products to determine the expected market return. Let’s assume that traditional active products (for example, F Class mutual funds) cost 1.5% and traditional passive products (for example, market-tracking ETFs) cost 0.5%. Those costs are likely a bit high, but the important thing to note here is that the difference in cost is about 1 percentage point.

Now, let’s turn to regret minimization. This, to me, was the ‘aha moment’. Proponents of active strategies have often told me that they recommend what they do because an active strategy is the only approach (again, setting factor investing aside for now) that can deliver market-beating returns. Notwithstanding the possibility of fortuitous tracking error in passive strategies, the statement is clearly true.

The left tail of the Option A curve exists precisely because the right tail exists. To me, it is disingenuous to only talk about the right tail without also referencing the (equally likely) left tail. Since the left tail represents the most significant possible loss, it logically follows that the regret minimizers would seek to avoid the possible outcomes that are part and parcel with the strategy.

All told, it seems clear to me that a rational, evidence-based case can be made that favours passive, beta-replicating products and strategies over active, alpha-seeking strategies irrespective of whether one is a utility maximizer or a regret minimizer.

Let’s put this into a contemporary context—and let’s use traditional mutual funds as a rough proxy for attempted market beating products and ETFs as a proxy for market level performance. As of now, the ratio is about 9:1. There’s about 90 cents out of every Canadian dollar invested in funds and about 10 cents invested in ETFs. Evidence and logic suggests that those numbers ought to be roughly reversed.