The best small cap stocks for 2016

Don't count out the little guys! Punch up the odds of having a winning portfolio with the All-Stars from our ranking of top U.S. 100 small-cap stocks

A few early flowers bloomed this February when a warm spell blew through Ontario. While they quickly faded, a new crop is waiting in the wings.

In a similar way, the stock market frosted over recently.  But it too will thaw and make a comeback. When it does, small stocks will be off to the races again.

It’s one reason why we’re pleased to present the third annual Small Cap 100. We reveal the small U.S. stocks that pass the strict tests we’ve employed for over a decade in the MoneySense Top 500 ranking of large U.S. stocks. Note: Our list is all U.S. stocks because the Canadian small-cap  group is dominated by two sectors—energy and mining.

We have high expectations for pint-sized firms because they’ve provided outsized returns to investors over the long term. Dartmouth professor Kenneth French puts some numbers on the phenomenon. In one study, he sorted U.S. stocks into three groups by market capitalization for each year between 1927 and 2016. The verdict? The smallest 30% of stocks performed the best overall with average annual gains of 11.9%. The middle group did nearly as well with annual returns of 11.7%. But size proved a liability for the largest group of stocks, which generated gains of just 9.6% annually.

While small stocks have provided big gains, they often fare poorly when the market stumbles. The Russell 2000 index, which tracks small U.S. stocks, tumbled 20.5% since last February. Our All-Stars, which earned at least one A and one B as value and growth investments, trounced the Russell 2000 by 12.3 percentage points over the same period. Alas, that didn’t stop them declining 8.2% overall. Since we started the Small Cap 100 two years ago, the Russell 2000 gave up 14.7%. The All-Stars outperformed the index by 10.8 percentage points, but they fell 3.9% overall.

We fully expect small stocks to rebound and hope our approach will continue to outperform. After all, the market has been through many ups and downs over the years and generated handsome returns along the way. 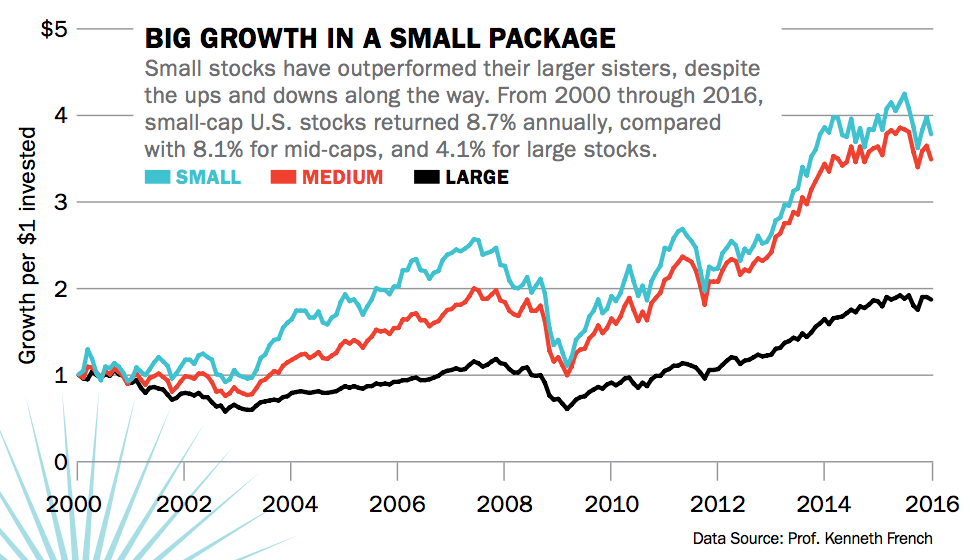 In an effort to find the best U.S. stocks, we evaluated 1,000 companies using the same methodology we use for our annual Top 500 ranking of large stocks. We use data from Bloomberg, but focus on smaller firms with market capitalizations and annual revenues of at least $200 million. (All figures in U.S. dollars.) Every stock is evaluated for its growth potential. Those with the best records are awarded As, the next best get Bs, and so on. Each stock is then graded for its merit as a value investment.

To get top marks, stocks must pass a series of strict tests. On the growth side, we favour firms that have increased their sales per share and earnings per share at a reasonable rate. We also like strong returns on equity, above average market performance over the last year, and low to moderate price-to-sales ratios. On the value front, we appreciate stocks selling at modest price-to-book-value ratios compared with their peers and with the markets overall. We view high debt loads with suspicion and give extra points to profitable ventures that pay dividends. To get to the top of the class, a stock should ideally possess all of these qualities.

The best prospects get a coveted double-A rating, which makes them outstanding growth and value candidates. Eight stocks earned the double-A award this time. But All-Star stocks that managed to get at least one A and one B are also well worth consideration.

The 100 stocks with the highest grades are displayed in tables with detailed, sortable data on each one. In addition, we’ve posted the full 1,000-stock table.

Staking out the middle ground

Mid-cap stocks have gained more than large stocks over the long term and they’re better able to weather economic shocks than smaller firms. That’s why many investors like to look for bargain stocks with market capitalization between $2 billion and $10 billion. The 10 U.S. stocks listed alphabetically in this  table were too large to make our Top 100 small-cap list, but we think they offer similar potential. These mid-caps got at least one A and one B according to the value and growth tests we use for our small-cap stocks. To encourage diversification, each one is from a different industry group.

Norm Rothery, CFA, PhD, is the founder of StingyInvestor.com. He may own shares of the Small Cap 100 stocks.