Why you're getting a tax break on dividend income

You might be aware that Canadian dividends have a tax advantage over regular income when they’re held in non-registered accounts. But the tax calculations are complicated, so you may not realize how it impacts you. Here’s the combined federal and provincial marginal tax rates you actually pay on Canadian dividends using B.C. as an example, as provided by taxtips.ca, and estimated based on Liberal tax promises. 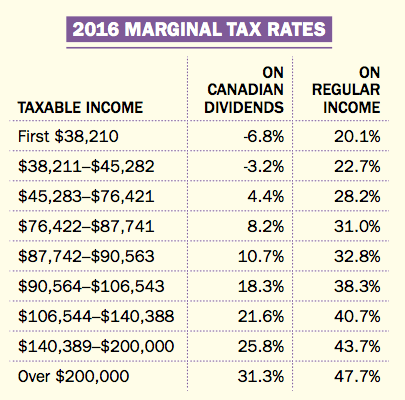 Note that Canadian dividends will get you a nice tax break at all income levels, but the benefit is especially large if you’re in a lower tax bracket.

Amazingly, if you’re in a low enough tax bracket in some provinces (including B.C.), you not only pay no taxes on dividend income at all, but the dividends cause a further small reduction in the rest of your taxes. This is a rare and delightful example of a “negative marginal tax rate”.

The actual calculations are pretty complex and go through a three-step process. First, dividends received are grossed up and included in taxable income. Second, a percentage tax rate is applied and, third, you receive a dividend tax credit which knocks your net taxes back down. The positive impact of the dividend tax credit is greater than the negative impact of the gross up.

A further complication to consider is that while dividend income is taxed favourably, it hurts you when it comes to income-tested government benefits such as the Old Age Security clawback. That’s because the income test incorporates grossed-up income—step one of the three-part process—not the dividends you actually receive.

Related: How to buy dividend stocks