Don't let your age stand in the way of your dreams, say the authors of Second Acts 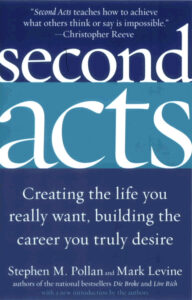 I recently picked up Second Acts from the local library. (Here’s a tip for frugality guerrillas like me: download a free sample from Kindle, read the intro, then place a hold on the web site of your local library. This way you get a bit of instant gratification, but you also save money.)

One of the nice features of this book is dozens of sidebars where the authors (Stephen Pollan and Mark Levine) highlight such famous second acts as Ray Kroc, Jimmy Carter, Paul Gauguin, Ronald Reagan, J.K. Rowling and many more.

Pollan himself has had a major second act as a life coach, following a stressful corporate career which ended with the good news that he had tuberculosis. Yes, good news, because the alternative diagnosis was lung cancer.

A focus of the book is written exercises designed to help readers uncover the life of their dreams, putting that dream into words, developing a “second act mindset” and identifying the blockages (or “closed doors”) that prevented actualizing dreams during the long “first act” so many have settled for.

Chief among the doors that have to be pushed open are age and money. Many convince  themselves they are “too old” to embark on a second act, or that they require staggering sums of money to pull it off. Another concern is often “duration.” If the prelude to a second act is going back to school or otherwise paying your dues in a profession like acting, then the number of years it will take to make the transition can weigh on those who are already approaching their golden years.

In some cases, we are own worst enemies. For some, fear of success prevents people from pursuing their dreams, for others it’s the opposite: fear of failure. Sometimes, we convince ourselves that we can’t proceed without the consent of close family members.

Pollan and Levine also devote a chapter to physical health and appearance, urging readers to do whatever it takes to realize their dreams: if that means losing 50 pounds, then get out there and diet and exercise; if it takes cosmetic surgery to enter a field that puts a premium on youth and beauty, then do it.

Jonathan Chevreau is the editor-at-large of MoneySense. He blogs here and at findependenceday.com. Find him on Twitter @jonchevreau.