Legislation and tax law will change, but best defence is to understand your rights under assignment sales

Would you be angry after finding out that your realtor—who just earned you more than $4 million in tax-free profit on the sale of your home—turned around only to re-list that home for more than $1 million what you just sold your house for?

This, in a nutshell, is what happened to one west coast couple. After selling their west side Vancouver home, the Rappaport’s learned that a simple clause in their Agreement of Purchase and Sale real estate contract legally allowed the initial buyer to resell their home before the final closing date. Turns out the second buyer was, in fact, their own realtor; he ended up co-purchasing the Craftsman-style home and then re-listing that same home for $1-million more a mere three months later. (For the fantastic Globe and Mail article by Kathy Tomlinson, go here.)

On the surface, it sounds like a simple, clear cut case of fraud. Perhaps that’s why the BC Superintendent of Real Estate and an advisory group for the province’s Real Estate Council have joined forces to investigate more than a few metro Vancouver real estate agents over allegations of fraud and insider trading. According to New Democrat David Eby, in a statement he made yesterday: Some realtors have been hiding the foreign origins of real estate transactions and using tax-avoiding techniques. The joint investigation could result in new legislation that would impede these shady business practices. “We realize that this is an urgent matter,” Marilee Peters, communications officer for the B.C.’s Real Estate Council wrote in a comment released yesterday.

But the practice of selling and reselling a property—known as an assignment sale—is actually quite common in real estate sales across Canada and throughout the world. However, Peters stressed that while assignment sales are legal agents must disclose their business intentions to their clients when engaging in buying, selling and reselling properties. “The council has become aware that some licensees may be engaging in business practices that are contrary to their clients’ best interests,” said Peters in yesterday’s released statement.

As such, Peters is asking other home buyers and sellers that have been directly affected by potentially improper business practices by licensed real estate agents to contact the council. (Go here if you have something to say.)

Known as an “assignment sale,” it’s a clause or document that allows the current registered buyer of a property to sell their interest in the property to another interested buyer. This means that the initial buyer can act as a stop-gap or go-between; a temporary buyer that releases their option to buy a property to another buyer (often for profit).

The practice of assignment sales is most common in the arena of new build condos. However, in B.C., assignment sales are also common in land lease agreements—such as residential areas where mobile homes are bought, but land is leased from the original owner. As such, it’s not uncommon for Canadian new build condo units to change ownership two, three, even four times before the condo building and its units are actually ready for occupation.

To appreciate how assignment sales work here is a great infographic from that same Globe and Mail piece: 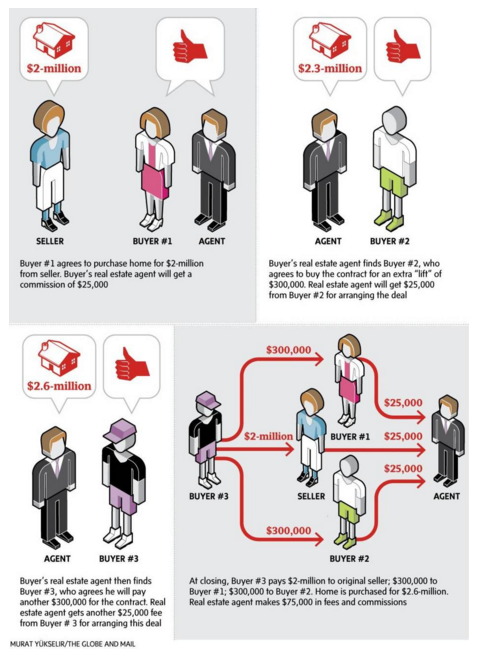 While there is nothing inherently wrong with a real estate agent making multiple commissions off of the selling and reselling of a property, it is absolutely unethical for an agent to engage in this practice without notifying each of their clients. Depending on the level of collusion and cover-up, this type of practice could even be deemed as fraudulent—which is why the B.C. Real Estate Council is investigating it.

What do you mean tax-free profit?

But I wouldn’t be surprised if the Canada Revenue Agency doesn’t start poking around into the practice of assignment sales. Why? Because up until now, it was assumed that assignment sales were predominantly used in the new build market—pre-sale or pre-built condos, townhomes and single family homes. As such, the revenue laws, in relation to what taxes are charged, only addressed new build assignment sales.

With the Globe’s piece (and subsequent investigations), I won’t be surprised if the CRA starts to enact new laws and interpretations that close gaps in the rules that surround untaxed profit of assignment sales. Why? Because the CRA is already taking steps to shut down loopholes. A couple of years ago the CRA started cracking down on flippers and real estate investors. Their primary target were people who tried to shelter profits from tax using the Principal Residence Exemption (see here for more on that story or go here for an explanation on how the principal residence exemption shelters sellers from capital gains taxes) but people who made a significant income using real estate investments were also targeted.

The first step is to take control of the assignment sale process. (Great explainer on the new build assignment process can be read here or here.)

That means, if a recent buyer wants the option to re-sell the rights to buying a particular home or condo, both the current buyer and seller must legally agree to allow for the option of an assignment sale. Whew. That’s wordy…but it really boils down to a simple clause that’s added to the standard Agreement of Purchase and Sale contract. A simple assignment clause looks like this:

The Buyer reserves the right to assign this contract in whole or in part to any third party without further notice to the Seller; said assignment not to relieve the Buyer from his or her obligation to complete the terms and conditions of this contract should the assignee default.

If, as a seller, you do not want to give the current buyer the option to resell your property—and you want to be absolutely sure that these wishes are followed—you can always add in your own clause denying any possibility of assignment sales, such as:

The Buyer agrees not to assign this contract in whole or in part to any third party.

Other options include: amending who is to be on title for the property (this must be done through lawyers for both the original seller and original buyer); an amendment to the original Agreement of Purchase and Sale; or a two- or three-party assignment agreement, after the fact.

Obviously, most new development builders won’t restrict assignments sales of new build developments as this is one method of increasing a new unit’s market value. However, if you’re participating in the purchase or sale of a resale property, be sure to understand any agreement you sign—and, when possible, seek legal guidance.

For those considering the purchase of a resale or new build unit using an assignment sale, it’s a good idea to become familiar with your legal obligations and the financial risks. To help, the Financial Institutions of B.C. released a statement in May 2008, that outlined the risks regarding the purchase of assignment sales. However, a quick glimpse at the 17 point checklist regarding assignment sales, courtesy of CanadaRealty.org, reveals how complex these deals can become. Whenever possible, seek out independent legal advice.

→ Obtain a copy of the builder’s agreement of purchase and sale;

→ What form of assignment agreement to be used;

→ What is the original purchase price;

→ What is the new purchase price

→ What is the deposit amount on the assignment transaction and who will hold the deposit – the agent/broker, the assignor’s lawyer etc.

→ the anticipated possession by the assignee – pre/post interim closing date

→ the amount of the occupancy payment

→ post-dated cheques for occupancy payments and other adjustments

→ who pays for the consent

→ who is paying the builder’s closing costs

→ How is payment of purchase price made – amount down, any amount paid prior to possession, amount paid upon the builder’s consent being obtained; amount paid on final closing etc. 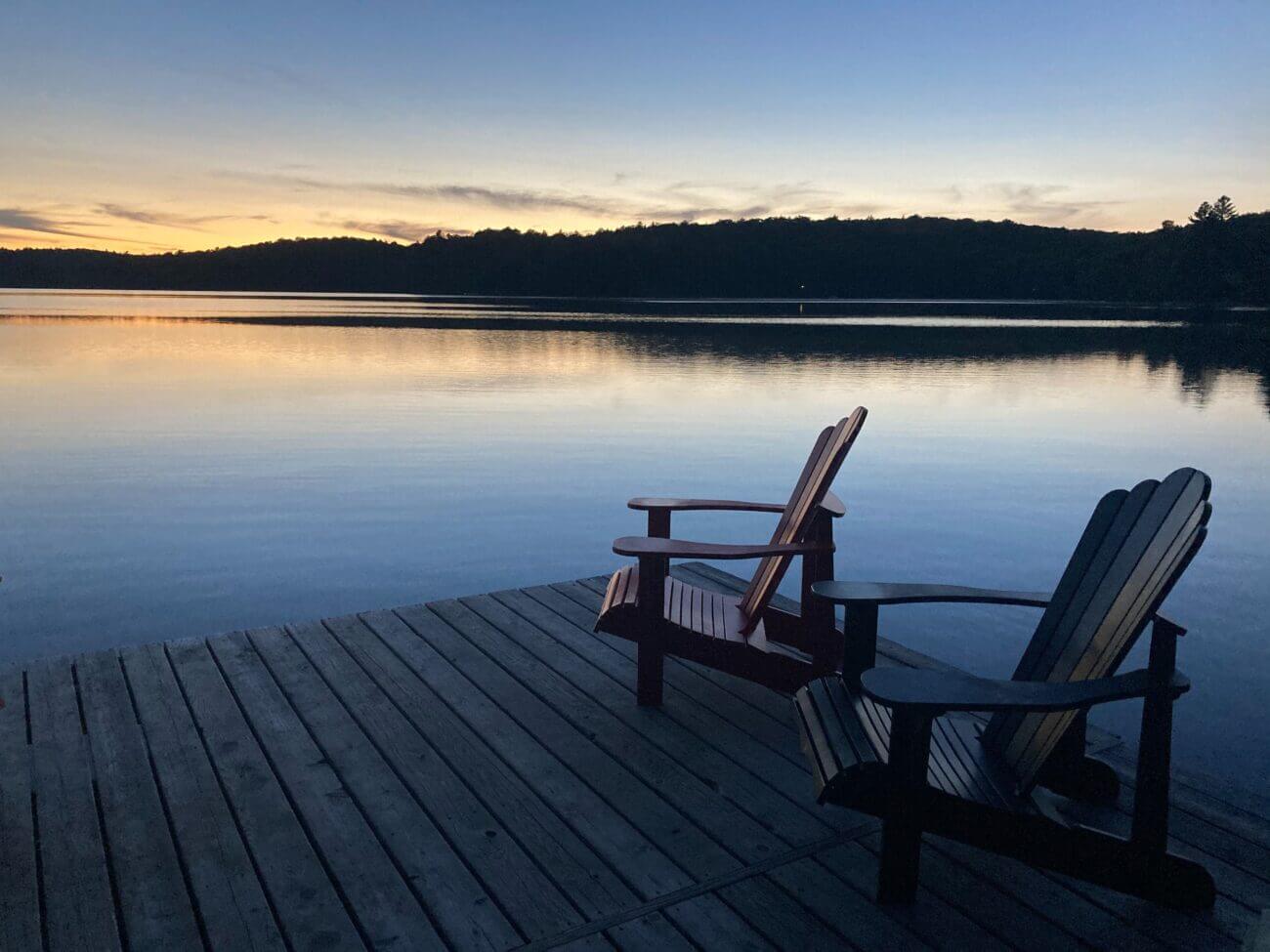