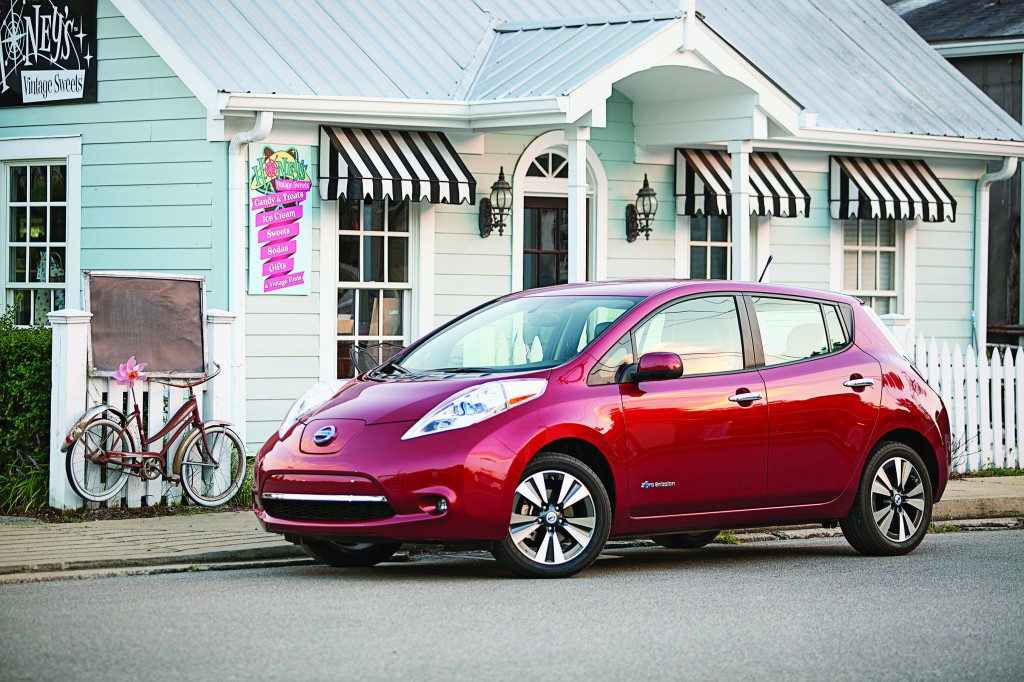 What if you never had to visit a gas station again? No more dead of winter fill-ups and no more fretting over oil prices. That’s the promise of electric vehicles. Naysayers will point out that charging stations are still sparse and the travel distance on a full battery is far less than a tank of gas, but these people pooh-poohed hybrid vehicles and there’s now more than nine million of them on the road.So, for early adopters who may be pondering an electric car purchase, our experts size up five of the current offerings that could wean you off the gas pumps for good.

Considered by most to be the original mass-produced electric car, the Leaf is reasonably priced and nearly as practical as Nissan’s other compacts. “It has plenty of functionality and enough range to get almost all Canadian commuters back and forth to work each day,” says Eric Novak. As with most electric cars, the Leaf has plenty of torque to provide instant acceleration and “the cheerful cabin is full of electronic wizardry,” adds Jil McIntosh. On a full charge the Leaf can go 135 km, but using the heater, air conditioner or even the radio can reduce the distance until your next plug in. To help alleviate “range anxiety,” the Leaf is equipped with GPS systems that can point you to the nearest quick charging station—where you can replenish your battery to 80% capacity in about 30 minutes.

In 2006, Tesla unveiled an all-electric sports car that wowed critics with its speed, power and sex appeal. The Model S is a more practical sedan but still oozes excitement and style with the best range of any pure electric vehicle on the market today. “It’s exciting to drive with instant speed and amazingly balanced driving dynamics,” enthuses Tim Dimopoulos. Even the smallest battery option more than doubles the range of the Leaf, but the steep price and a lack of service centres puts it out of reach for most.

Based on the same platform as the popular Chevrolet Cruze, the Volt is entering its fourth year and does something no other competitor can: Eliminates range anxiety by combining battery propulsion with a gas generator. In ideal conditions, Ron Corbett says, the Volt can drive for 65 km on batteries alone. Then the gas generator comes on and seamlessly keeps the wheels rolling for another 500 km or more. Still, our experts felt the Volt was pricey for what you get and the rear seats are cramped even for two people.

Lesser known than some of North American rivals, Ford only sells the C-Max as a regular hybrid or the Energi plug-in hybrid. On battery power alone the Energi musters about 45 km before the gas engine takes over, but Petrina Gentile considers that pretty respectable. She praises the Energi’s strong acceleration and driving performance and Corbett likes the car’s “elegant” looks and “well-crafted cabin.” Our experts were put off by the $6,000 price jump between the regular hybrid and the Energi plug-in model.

The bargain choice but certainly not the first pick for any of our panelists. Novak says the i-MiEV gets good marks for its “adorable goofy looks” and small size. Despite its diminutive proportions, McIntosh says the i-MiEV is surprisingly roomy inside but still “feels and sounds cheap with its tinny doors and hard plastic interior.” Driving distance is on a par with the Leaf but it will take 22 hours to charge the battery through a normal wall outlet. A home charging station cuts that time to seven hours but costs about $2,000 to install.

Tim Dimopoulos host of the Automotive Report on 680 News

JilMcIntosh automotive writer with the Toronto Star and Metro