Ready to go original? Here's how to navigate the galleries to find works that speak to your good taste—without being taken for a ride. 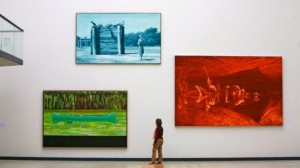 It’s all coming together: you’ve settled into a nice house in a leafy part of town, you chauffeur the kids to soccer practice in a practical car, you host intimate dinners with decent bottles of Argentine cabs and malbecs. Yes, you’ve come of age.

Except, of course, for that dusty Ferrari poster on the living room wall, that Michael Jordan dunk shot next to the big-screen in the den. Once, during late-night study sessions in the college dorm, they spoke to who you were; now they’re merely embarrassing. Ditto that glass-frame Degas print above the fireplace, Monet’s water lilies in the master bedroom. Pretty, to be sure, but hardly the stuff of the urban (or even suburban) sophisticate.

No, what you need is art. Real art. Original oils, contemporary sculpture, pieces that speak to your good taste, your budding maturity and, most importantly, your heart. You have the desire. You have the means—say, $1,000 to $10,000 in free cash. Well and good. But where to start?

Buy what you love
Of all the advice from artists, gallery owners and collectors, this particular nugget—buy what you love—is near universal. “Don’t buy what other people tell you to,” says Peter Simpson, arts editor with the Ottawa Citizen, and an avid collector with more than 70 pieces of original art. “Buy what you like, because you’re going to be looking at it every day of your life.”

“Does a particular painting move you?” asks Phil Emond, co-owner of the Gordon Harrison gallery in Ottawa’s Byward Market. “Are you emotionally connected to a piece? That’s the art you should be buying.”

Of course, sometimes art can engender too much, or the wrong type of emotion. Edvard Munch’s The Scream is an acknowledged masterpiece, but would you really want to have the thing in your bedroom, staring back at you first thing in the morning?

He who hesitates…
When you do find a piece that speaks to you on an emotional level, that you can live with year-round, jump on it, because as a general rule you only get one chance at original art.

Alymer, Que., architect Graham Murfitt fell in love with a Gothic rendering of the Peace Tower by fellow architect-cum-oil painter Stuart Kinmond. “I saw it, and I had to have it,” says Murfitt. “The problem was, I had nowhere near the asking price in ready cash. So I cut him a cheque for $1,000, and paid for the rest in used fly fishing gear I had lying around the house.”

On the flip side, Peter Simpson says he fell in love with an early Gordon Harrison landscape of the rust-iron cliffs of Prince Edward Island, where Simpson was raised, but—to his everlasting regret—decided he couldn’t afford it at the time. “If I ever find out who bought it,” he quips in his blog, “I’m going to break into their house and steal it.”

He has two tips for would-be collectors short on cash, but loathe to let a particular work of art slip through their fingers. “Most galleries will allow you to pay in instalments. And don’t be afraid to haggle. At the end of the day it’s just another business transaction, and there’s nothing wrong with making an offer below the asking price, as long as you don’t get greedy.”

To gallery, or not to gallery
Of course, asking to “borrow” a painting might go over better with an individual artist—especially one you know—than a swanky high-end gallery. Which brings us to the question: which is better, buying from a gallery, or directly from the artist?

As with most things art, there’s a range of opinion. “If you buy directly from artists you get to know them, get a sense of their artistic philosophy, where they’re coming from, and the concept and significance behind individual works,” says Emond. “Some galleries don’t have the time, or take the time, to get to know their artists.”

On the other hand, gallery representation is important in that it “speaks to the calibre of the art if it’s good enough to  be represented by a high-end gallery,” says Emond.
If you do shop galleries, says Simpson, “don’t be intimidated by your lack of a fine arts degree. You’re ultimately the only expert on what you like.” That doesn’t mean you ignore the expertise at your disposal, however. Ask questions of the gallery owner or staff. Remember, there are no stupid questions when it comes to art—and even if there are, the staff have heard worse.

The problem, of course, is that in exchange for all that expertise, galleries will typically earn commissions of 50% or more on everything they sell. In other words, if you can recognize quality work on your own, you might get more bang for your buck visiting open houses or studio tours, and buying direct from the artist. The ArtistsInCanada.com website maintains a national directory of Internet links to hundreds of artists throughout the county, including photos of their creations—a great way to track down and preview the work of individual artists in your city or region.

The art of valuing art
The art market is perhaps one of the least efficient markets on earth. When you buy a used car, you can look up values in the Canadian Black Book, when you buy a stock, you can look at analysts’ reports. But art is tough to value—and some galleries can take advantage of that if you’re not careful.

Paintings of seemingly similar quality can be priced tens of thousands of dollars apart. Sometimes it has to do with the size of the local market, sometimes a showing gets a lot of buzz, sometimes it’s the artist’s pedigree. “Has he gone to a prestigious school of art, trained in Europe, shown paintings in New York and around the world?” asks Guy Berube, owner of Ottawa’s La Petite Mort Gallery. “All that will be reflected in the prices an artist can command for his work.”

Watch out though, because artists and galleries alike will occasionally employ quasi-ethical means to bump prices a bit higher than they should be. Berube recalls being hired on more than one occasion to bid up the price of various paint­ings on auction in New York. “My job was to increase the value of paintings by getting into bidding wars, and then pulling out at the right moment, so I wouldn’t actually have to pay for them.” The inflated selling price then becomes the new benchmark not only for that artist’s work going forward, but for his back catalogue as well.

The price at which a piece of art sells is also influenced by more mundane economic considerations. “I have paintings in my Ottawa gallery that, if I were selling them in New York, would be priced three times higher,” says Berube. “It all comes down to what the market will bear. In New York I was selling photographs for $15,000. I’d never be able to do that here in Ottawa. There isn’t enough money in the city to support those prices.”

In other words, bargains can be often be had by combing galleries in smaller communities— often at the expense, however, of convenience and selection.

Art as an investment
In a word (or three): don’t do it. “It’s really hard to predict which artists are going to take off, which works will appreciate significantly over time,” says Henry. Occasionally, the dollar value of certain works of art will even crash, as tastes and perceptions shift over time. Thus, a painting that might have been valued at $50,000 twenty years ago, might only be worth $15,000 today.

“I’ve never bought a painting for investment purposes, and I wouldn’t recommend it,” says Simpson. “I certainly have pieces that are appreciating in value, but it’s never been a consideration in the original decision to buy. If the value of one of your paintings goes up, it’s a bonus.”

If you want to make sure your purchase at least holds its value, Emond suggests buying less expensive works by artists whose careers are already flourishing. “Not every painting by a given artist will have the same appeal,” he says. “Less popular paintings tend to be priced lower and they’ll appreciate faster as the artist’s reputation solidifies.”