Am I on track… 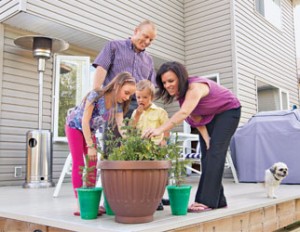 The goal
Jon and Rhonda Holland want to pay off their mortgage in 13 years.

The couple’s household income is $120,000 annually and they have three years left on their 2% variable-rate mortgage. Up until now, they have been making $700 mortgage payments biweekly, but no extra payments. The Hollands plan to apply every annual pay increase they get over the next few years—about 4% net annually—to increase those payments. “We both have secure, unionized jobs and get good pay raises and bonuses consistently and feel this trend will continue,” says Jon, a manager for a mid-sized bank.

The couple want to have the mortgage paid off by their mid-50s so they can retire by 60. “At that time, I’ll have been in Canada for 25 years—a very special anniversary for me,” says Jon, who hails from Britain. “That goal resonates with me. I refuse to go into retirement with a mortgage. It just doesn’t make sense.” 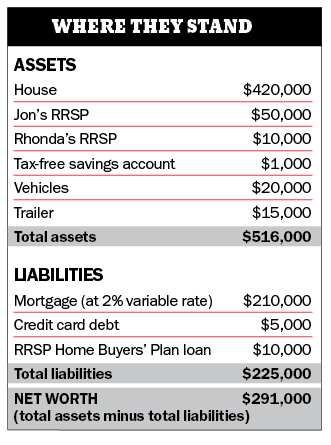 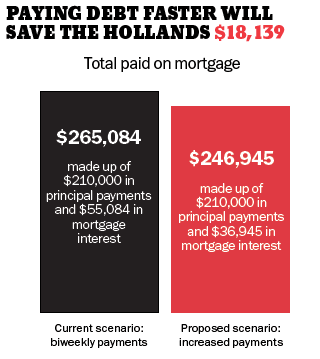 The verdict
According to Jason Heath, a fee-for-service adviser with E.E.S. Financial Services in Markham, Ont., the Hollands will be able to meet their goal. In fact, if the family does indeed get a 4% annual wage increase, and they apply all of the extra money (after taxes) to their biweekly mortgage payments, they should have their mortgage paid off in less than eight years. That’s compared to more than 14 years if they continue their current payments.

He warns that while the plan to put all future raises towards their mortgage is a good one in theory, it might not come to fruition exactly as they planned, because their basic expenses will rise over time along with their income. “They must be vigilant with their expenses to make this plan a success.”