Shop ’till you drop 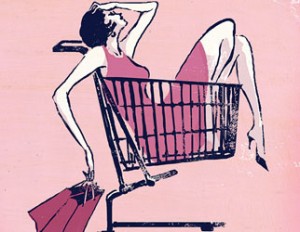 Our previous article on hoarding explained why some people felt unable to let go of seemingly worthless objects and how to come to grips with the root causes of the behaviour. On the other end of the spectrum are overspenders, who try to achieve safety, comfort and affection by spending excessively on themselves and others.

A common cause of compulsive spending is deprivation during childhood. Overspenders were often teased and bullied for not having the right clothing or toys. They convince themselves that if they could only get the most popular style of sneakers or the latest electronic gadget, they could finally become happy. Overspenders learn early in life that shopping provides a temporary escape from worry and anxiety — whether from a traumatic past, depression, dissatisfaction with life, or a general feeling of emptiness.

Ramona Reed tends to give away vast sums to strangers in need, but she has also had periods when she spent recklessly on herself. She remembers two events in her life that set the stage for years of overspending. The first occurred in high school when her father made her wear ripped tennis shoes to school every day — even though he could easily have afforded to buy her new ones. Then, on the day she graduated from high school, her father sat her down at the kitchen table and gave her some advice. “He said ‘No. 6’ — he called us all by a number because he couldn’t be bothered to remember our names — ‘you’re dumber than dirt, but you’re pretty,’ ” remembers Reed. “ ‘So stay that way if you want to amount to anything.’ Who says that to a daughter?”

For years, Reed spent thousands of dollars on clothes, make-up, jewelry and plastic surgery — including breast implants and testosterone shots — to make herself more attractive. And even though she’s very pretty today, she still feels insecure. “The only thing that eases the pain is spending money on myself or just plain giving it away,” she says. “But that only works for a short time. Then all of those feelings of inadequacy start up again. I’m just never good enough.”

Overcoming overspending
When overspending is a symptom of extreme feelings of inadequacy, professional help is required. But less drastic overspending tendencies can be overcome by behaviour modification. Tricks like bringing a list when you go grocery shopping and pledging to stick to it can help. As can ditching the credit cards and only using cash for purchases.

Sometimes a little brainstorming with your adviser can open your eyes to the habits that are sabotaging your finances. That’s what Sally Palaian, a licensed psychologist and author of Spent: Break the Buying Obsession and Discover Your True Worth, found with a recent client who felt she was becoming a shopaholic. A little digging into her daily routine uncovered that the client was doing almost all of her overspending on Friday evenings.

“A brief discussion with her brought out the fact that she used to have dinner with her ex-husband on Friday nights,” says Palaian. “Now that the two are separated, the excess shopping on those nights filled the loneliness.”

The solution? Palaian helped her client enroll in a painting class at the local art gallery that took place every Friday evening. With new friends and a new hobby the overspending stopped.