RRSPs in your 30s: Learning to juggle 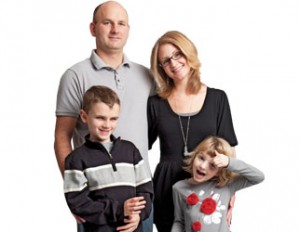 Most of us feel that by our mid-30s, we’ll be well on the road to savings. The reality is usually very different. Chances are, you’ll find yourself struggling to keep many balls in the air—mortgage payments, the huge expenses of a growing family, and the increasing responsibilities of a busy career. Your income is probably not hugely generous, and there may not be much money to spare for savings. In fact, you may find yourself constantly trying to satisfy several financial demands. Should you be paying down the mortgage? Saving for the kids’ education? Or putting money into an RRSP?

To make the right choices, you need to do a bit of planning. There’s no right answer for everyone, and much depends on your priorities and the setbacks you face along the way. Just ask Scott and Erin Parkin of Brantford, Ont. Erin, 33, has been a stay-at-home mom to her two kids, Owen, 10 and Molly, 6, for the past 10 years. Scott, a 39-year-old engineer, has been the sole income earner and since he’s in a high tax bracket, he has always contributed to RRSPs—his own plan plus a spousal RRSP for Erin. Over the years they’ve accumulated $66,800 in Scott’s RRSP and $20,000 in Erin’s.

But those contributions came to an end in 2009. That’s because the Parkins aren’t comfortable with the way their RRSP money is invested. Their entire portfolio is made up of segregated funds with annual fees over 3%, and they don’t know what to do about it. But the bigger reason is that they are trying to stay on track to pay off their $198,000 mortgage in 15 years. “We put the little extra money we have—about $3,600 a year—towards the mortgage,” says Scott.

The couple also say they could probably squeeze an extra $200 a month from their budget to put towards either the RRSP or the mortgage, but they aren’t sure which option is best. These competing priorities are typical for people in their 30s. “It’s a constant battle,” says Scott.

Megan and Matthew Shaw of Thunder Bay, Ont., share the Parkins’ concerns. They too, are trying to raise a family (they have three kids, ages 9, 4 and 2) and pay off their $99,000 mortgage solely on Matthew’s $85,000 salary. (Names have been changed to protect their privacy.) “We have no consumer debt so we’re happy with that,” says Matthew, 35, a police officer for the last six years. “But after expenses we usually have about $5,000 annually to invest, and we don’t know where to put that money—the mortgage or RRSPs?”

What makes the choice more vexing is the fact that the Shaws are at a loss over how to fix the stagnant returns on their $150,000 RRSP nest egg. They feel they need a whole new strategy. “Why are we putting all this money into RRSPs and not getting any returns?” asks Megan, 38. “Our annual fees, which average about 2.8%, are ridiculously high.”

The Shaws feel stuck. Most of their mutual funds have deferred sales charges (DSCs)—a penalty you pay when you sell the fund before a certain number of years. These charges usually go down to zero after seven years, but before then the charges can be steep. “We’re debating whether to bite the bullet, sell the funds and pay the penalty, which could amount to several thousand dollars,” says Matthew. “Or, should we wait and sell them when the deferred sales charges reach zero in a few years? We just don’t know.”

In your 30s—like Scott and Erin Parkin, and Megan and Matthew Shaw—you’ll often feel frustrated at not making much financial progress. The good news is that focusing on paying down a mortgage is an excellent strategy. “It’s the highest-return risk-free investment the average person can make,” says Schlenker, the planner. “Most mortgages allow extra principal payments, up to 10% of the balance, on anniversary dates. Take advantage of that opportunity.”

Still, if saving is a huge motivator for you, it may make just as much sense for you to contribute to an RRSP. “Mortgage vs. RRSP? I get asked that question all the time,” says Lamontagne. “If it’s strictly a financial decision, then typically high-income individuals in the top tax brackets are better to maximize their RRSP room before making additional mortgage payments,” says Lamontagne. “The key is not to spend that refund. If the Parkins contribute the refund back to their RRSPs, or even use it to pay down their mortgage, then they will be compounding their savings.”

Something should also be done with how the couples’ existing RRSPs are invested. The Parkins and the Shaws have their savings tied up in high-fee investments, and the costs of their funds are eroding their returns. “In reality, investors can control only two things that affect the returns on their investment accounts—their own behaviour and the fees they pay,” says Schlenker. “Both the Parkins and the Shaws are paying fees of $3,000 to 4,000 a year, far higher than seems warranted.”

Lamontagne agrees. “If they can lower their costs by even 0.5%, that will leave thousands of dollars more in their accounts by the time retirement rolls around.” The Parkins and Shaws should start shopping around for a fee-based adviser, rather than one who receives commissions from the funds he or she sells. Ideally, their adviser should be using low-cost exchange-traded funds (ETFs) or index mutual funds to build their RRSP portfolios.

In the Shaws’ case, they can begin the transition by transferring at least some of the money out of their mutual funds. You can usually transfer 10% of the balance each year without being hit with the deferred sales charge. A low-fee investment portfolio split 60% equities and 40% fixed income—similar to the MoneySense Couch Potato Portfolio—is a good place to start.

Finally, the Shaws need to realize that police officers such as Matthew stand to collect a very generous pension in retirement. That means having a large RRSP would result in that money being taxed heavily when mandatory withdrawals start at age 72. So a better option for the Shaws may be to use extra money to pay down the mortgage and max out their TFSAs before they save more in RRSPs.