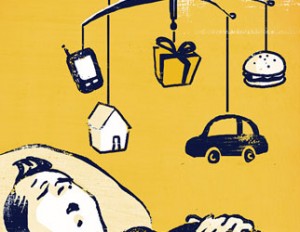 Financial enabling is short-term help that hurts in the long run. It often involves a parent of substantial means who uses his or her money to try to keep the kids needy and dependent forever. The problem is that when adult children are made dependent on their parents, they can lose their drive to succeed. Even worse, the parents never learn to let go of their controlling, parental role. In the end, it usually harms both parties.

Sam Carson, a 64-year-old counsellor for a drug addiction clinic, has two grown children that he has showered with cash gifts for years. “I was always trying to make their lives easier,” he told us at the Onsite clinic. But now that his kids are married with families of their own, he’s learning that they need to learn to fend for themselves.

Just recently, for instance, Carson’s daughter Maureen wanted to put her five-year-old daughter Molly in an intensive French immersion program, but she couldn’t afford it. “I could have just given her the money for it but I knew I would be creating a false economy for them,” says Carson. “Deep down I know that giving my kids a step up doesn’t always work.”

Financial enablers often grow up in poverty, and promise themselves that they won’t ever let their children go without, as they did. And while it’s true that financial enabling often starts with a sense of genuine care and concern, it can also be driven by guilt over mistakes made in the past. “I’m a divorced dad and I came to realize that the only way to change the enabling relationship I had developed over the years with my kids was to take personal responsibility for changing it,” says Carson. “It was up to me to break the destructive behaviours that I had allowed to flourish. I’m now more likely to leave my daughter alone to solve her own problems with her husband and family. I’m glad to say she’s doing just fine.”

Overcoming financial enabling
Letting go isn’t easy, but if you shelter your kids too much, you could be harming them. Learn to say ‘no’ to requests for money from your grown children. It’s fine to help out in times of great need, but if they have jobs and they keep coming back to you to help pay the bills, you’re helping them to avoid the real problem, not solve it.

Allowing them to experience the consequences of their own decisions helps them learn. It provides incentive to change, and — once they’ve overcome a challenge on their own — helps them to develop confidence.