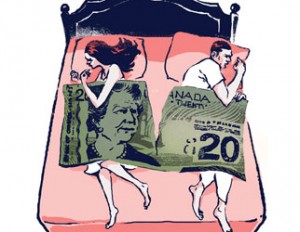 In this fourth installment of our Seven deadly money disorders series, Julie Cazzin profiles a couple with serious communication problems when it comes to the family budget.

At the Nashville clinic for money disorders, Max Deacon, a 42-year-old salesman in the oil and gas industry, told me his marriage with his wife Marie is on the rocks. The problem? Marie is a classic underspender, but in her mind, it’s Max who has the problem.

Marie, a single mom at 18, had always been tight with money, Max told me, but she suddenly became much worse when her daughter Jane, 23, left for Chicago to pursue a singing career. “Then Jane announced she was getting married this year. Marie hasn’t dealt well with the fact that she is leaving us. I think she’s projecting a lot of the issues she has with Jane onto me.”

Because Marie would get upset whenever Max spent money, he began hiding his purchases by mixing them in with business expenses on his credit card. But Max wasn’t prepared for the depth of her anger when she found out. Marie hasn’t spoken to him or been intimate with him since the day she ripped open his credit card statement a year ago and discovered the financial lies. “She told me I wasn’t to be trusted. Then she flung the household budget at me and told me that it was her good budgeting that enabled me to spend money so freely on credit cards. So I’d be in charge of it now.”

Despite their crumbling relationship, Max isn’t ready to give up. “Both Marie and the church minister suggested that I come here for counselling, and I have,” Max told me. “I feel dumb, shamed, tired and angry most of the time — and sometimes I want to run — but I know I just can’t do that. I’m a devout Christian and I take my wedding vows seriously. I’ll always stick by Marie.”

If you and your partner don’t see eye to eye about money, there are a few things you can do at home to make things better. Start by communicating and really listening to one another. Set up a weekly meeting to talk about any money and behaviour issues that have arisen over the past seven days. The key is to enter into the meetings agreeing that there will be no laying of blame, and neither partner is completely at fault.

The focus should be on reaching a compromise on issues that are preventing you from enjoying your relationship. At the first meeting, try to come up with a couple of financial dreams that you both share. Often the process of working together towards a common goal is enough to begin rebuilding a tattered relationship.