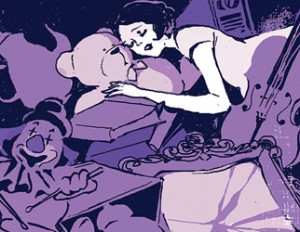 Steve Levinson, a 49-year-old radio announcer, loves to drive around collecting stuff. “I have every Goodwill in America programmed into my GPS,” he says. Levinson attended the Nashville workshop because his wife gave him an ultimatum — clean out the junk in the barns and basement, or else. “Anywhere I go, I have this uncontrollable urge to stop and buy something at the local Goodwill store,” says Levinson. “I feel at home there and the urge to buy is really powerful.”

At the workshop, Levinson recounted how, as the youngest of four kids in a dysfunctional family, he was sexually abused and neglected as a child. The only fond memories he has of his mother (who was also a hoarder) were trips to the local Goodwill. “I remember my mother taking me there when I was a child, giving me a couple of dollars and feeling like a kid at Disneyland,” Levinson told me. “At home, when I was lonely, I would just go downstairs to the basement and there I’d be surrounded by my friend, clutter. It was the only place I felt safe, loved and accepted.” (We’ve changed the names of Levinson and all other clients of the Nashville clinic mentioned in this story to protect their privacy.)

Hoarding occurs when we stockpile objects or money in order to feel safe and relieve anxiety. It’s an example of an otherwise positive behaviour — saving — taken to the extreme. Some hoard money, while others have a compulsion to hoard objects such as toilet paper, shoes or old tin cans. It’s the accumulation of the stockpile — not the buying or spending — that provides the hoarder with a sense of security. Objects become stand-ins for what’s missing in their lives and these objects develop strong emotional meaning. There may be a genetic component involved, but most hoarders tend to have a history of childhood deprivation, abandonment or betrayal.

Changing hoarding behaviour is surprisingly difficult. Detaching themselves from their possessions can make hoarders feel wasteful, guilty and anxiety-ridden. Levinson sees the objects he hoards as a kind of investment. “My beanie babies, my gum wrappers … they’re like stocks and bonds to me,” he says. But two years ago, while cleaning out his deceased sister’s house full of junk, Levinson had an epiphany. “I realized, ‘Oh God, this is what I’m going to leave my wife and sons with when I die.’ ”

When Levinson finally cleaned out one of his four small barns earlier this year, his wife Lisa wept. Then a couple of months ago, for the first time in 45 years, he went into a Goodwill store for two whole hours and didn’t buy a thing. “I had a friend come in with me and witness the event,” says Levinson. “I wasn’t sure I could do it, but when I did, I felt like I was on the road to recovery.”

Overcoming hoarding
The main treatment for severe hoarding is psychotherapy designed to help the hoarder learn why he hoards. Often a therapist or professional organizer will have to help the hoarder de-clutter his home. The key to long-term success is to have the hoarder play an active role in physically getting rid of his stuff. It’s the only way for long-term changes to occur.

If the hoarding problem is milder, there are some ways to mitigate the behaviour without therapy. One method is to agree to a rule that says if a box with stored possessions hasn’t been opened within a set period of time, it’s simply thrown out — without ever opening it. If you have pack-rat tendencies you may also find it’s easier to give things away to charity instead of tossing them in the trash.

If money is the object being hoarded — either literally, as in stuffed in the mattress, or squirreled away in bank accounts — the treatment is similar. This type of hoarding also arises from deep insecurity and fear about the future. In these cases, the key is to convince yourself that you have enough, that you are secure. A financial adviser can help by running the numbers and demonstrating that you can meet your short- and long-term financial goals with ease, so it’s okay to enjoy some of your money today.