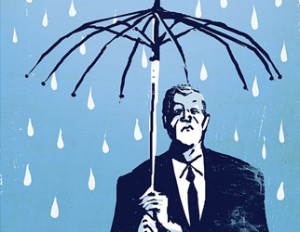 In this third installment of our Seven deadly money disorders series, Julie Cazzin looks into the mind of the “underspender”, or those who find it painful to part with their cash.

Every now and then the news reports on someone who lived like a pauper during his lifetime, only to leave an estate worth millions of dollars when he dies.

Recently, researchers got some insight into why that happens when they discovered that it physically pains chronic underspenders to part with their cash. Like money hoarders, such extreme misers worry constantly about money even if they have healthy savings and little debt. But in their case, the disorder is more an aversion to spending more than a desire to stockpile. They’ll leave an embarrassingly small tip at a restaurant, and when they shop they tend to haggle excessively over quality and price to get a better deal. The underspender’s income makes no difference — he could be the president of a corporation making $500,000 a year, or a bartender making $30,000.

In some cases, underspenders can grow to loathe their own cheapness, but they can’t change their ways. “My biggest concern has always been that I can’t bring myself to buy gifts for the people I love,” Angela Samson, a 49-year-old human resource specialist, told me at a Nashville workshop for people who suffer from money disorders. “It’s a small thing but the whole idea of spending money on things that seem luxurious overwhelms me. It just seems so wasteful.”

The refusal of underspenders to enjoy the spoils of their wealth is often based on a sense of guilt or a compulsive need to be self-sacrificing. Often such sacrifice is equated with moral goodness. Underspending habits start early and are hard to change. Chronic misers live with a deep dread of financial ruin. They’re convinced they’re on the verge of disaster no matter how much they have.

Overcoming underspending
One method for treating underspenders is to convince them that spending can, in some cases, actually be an investment. Not an investment in stocks or bonds, of course, but one in their happiness.

Going out to dinner with friends, for instance, can be presented as an investment in friendship, and a European vacation with the family can be seen as an investment in the kids’ education and development. “It’s just so much easier to spend when I remind myself of the value I’m getting from the purchase instead of concentrating on the money that I’m giving up,” says Samson. “Plus, I remind myself that I’m spending on the things I value and love. That’s what works for me.”

It can be a slow process. If you usually don’t tip at restaurants, start by forcing yourself to throw a few dollars into a charity collection box. The next step might be to treat a friend to lunch. The positive re-enforcement from seeing your friend’s delighted reaction will make it easier to do it again.