Selling your soul to the company 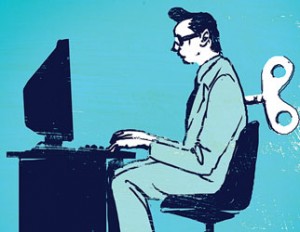 Workaholism is one of the few addictions that society approves of. It’s true that climbing the corporate ladder can make you temporarily happier and you can earn the respect of others. But if you completely depend on your job and the approval of your superiors and co-workers to build self-esteem and to satisfy deep emotional needs, it can lead to unhealthy behaviour.

Jordan McGuire, 39, had always wanted to become a pro hockey player, but he gave up his dream to prove himself to his distant father by getting a job at the family-run manufacturing business. McGuire worked seven days a week, every week, to grow his father’s company. He was the company’s chief executive as well as its top salesman and spent more than 200 days a year on the road.

Still, no matter how hard he worked, McGuire’s father never acknowledged his son’s success. “He just kept saying that without him I’d be nothing,” says McGuire. “So I worked harder and longer to win his approval and became more and more frustrated when it never came. Looking back, I realize I come from a very messed-up family.”

McGuire eventually looked for relief in various addictions—first in drugs and alcohol, and then, eventually, food. After years of struggling to give up drinking he even developed a 10-month addiction to Gummi Bears, causing him to gain 50 lbs. The turning point came three years ago when his daughter Brianna was born. McGuire took a long, hard look at his life and decided he needed to change everything. “I never held Brianna when I was drinking or on drugs,” says McGuire. “And since she arrived, I’ve accomplished a lot of things. I spend as much time as I can with her now.”

McGuire has put his multi-million dollar company up for sale and he is enrolling in a community college course to pursue his new goal of becoming a counsellor for teens. “Don’t get me wrong—it’s a really tough decision to let it all go,” says McGuire. “But to me, money is just evil. I now realize that it was never something I wanted. What I really wanted was for my dad to acknowledge my hard work and to be proud of me.”

Overcoming workaholism
To stop workaholic behaviour, start small. Gradually cut down the number of hours you work each week. Make it a rule not to work weekends. That may mean delegating more tasks to others or being less of a perfectionist. As well, along with the regular meetings you schedule every day, schedule a set period of time daily for a short walk, trip to the gym or simply a half hour at the coffee shop to read a book for pleasure.

Look into a hobby or leisure activity that you enjoy that has nothing to do with work, so that you can talk to family and friends about it. It may be a book club, a weekly cooking class or a new sport like tennis. Most importantly, don’t let yourself feel guilty when you’re not working. It’s hard to do, but until you can, your job will rule your life.