How we find the best of the best

Ranking 415 Canadian cities from Salt Spring Island, B.C. to Conception Bay South, Nfld. isn’t easy. Some might even say it’s impossible. While it’s true our ranking is unable to capture the beauty of the sunsets or the passion of the local hockey team’s fans, we think a lot of the things that make a city a great place to live can be measured.

We rank how each city measures up in 10 categories: Wealth and economy, affordability, population growth, taxes, commute, crime, weather, access to health care, amenities and culture. We give each category a weight out of a total of 100 possible points, making categories we think are most important to average people worth the most points. Different things are important to different people, of course, and we invite you to adjust our category weightings to your taste and find the city that’s perfect for you using our build-your-own-ranking tool. 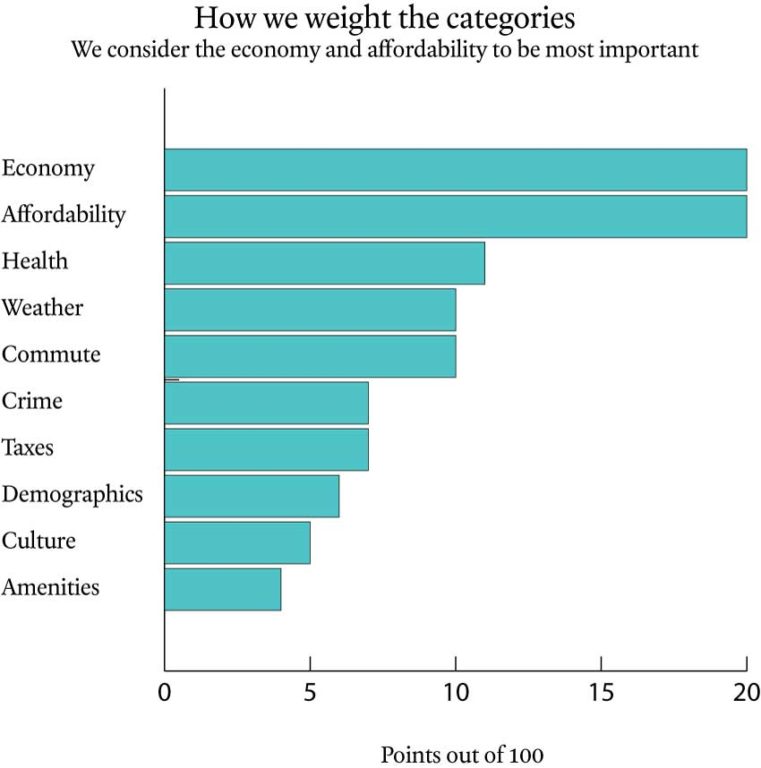 We made a number of tweaks and adjustments to this year’s ranking. That means this year’s results are not directly comparable to previous years.

Two of the biggest changes we made were to the health category and the demographics category. The ranking now includes data on the median wait times for various medical procedures. We awarded points to cities where residents get faster access to surgeries and treatments.

The demographics category in the main ranking used to measure the five-year annualized population growth of cities against an ideal rate pegged at slightly above the national average, with cities penalized for growing faster or slower. While it’s true that fast-growing cities can face challenges, we believe those difficulties can be absorbed and addressed if local leaders are effective. We also didn’t want to penalize suburbs of major cities that are growing quickly because they’re building a lot of new housing, which is vitally important to address the affordability crisis in Vancouver and Toronto. As far as we’re concerned, if lots of people want to move to a city, that’s a good sign — and if the municipality is doing a bad job of handling that growth, it’s likely to be reflected in other areas of the ranking.

A note on how we define a “city:” We examined the largest of what Statistics Canada calls “census subdivisions,” defined geographical boundaries that usually encompass a municipality. Sometimes Statistics Canada uses names that are different from those in common usage — for example, if you’re looking for Fort McMurray, Alta., the name of its census subdivision is Wood Buffalo.

Here’s how we determine how the cities score in each category. Unless otherwise noted, we award points by ranking all 415 cities in each sub-category, giving full points to the city that does the best, close to zero points to the city that does the worst and something in between for the rest of the cities on a curve. In cases where data was not available for every city, we substituted a comparable value — for example, for cities where there was no data on rental prices, we substituted the weighted average of rental prices in the same economic region. We cut two cities from the ranking this year — Whitehorse and Yellowknife — because we would have had to make too many substitutions for missing data to obtain an accurate final result.

Wealth and Economy: 20 points. We awarded those points based on the following subcategories:

Affordability: 20 points. We awarded those points based on the following subcategories:

Taxes: 7 points. We awarded those points based on the following subcategories:

Crime: 7 points. We awarded those points based on the following subcategories:

Weather: 10 points. We awarded those points based on the following subcategories:

Health: 11 points. We awarded those points based on the following subcategories:

Culture and community: 5 points. We awarded those points based on the following subcategories:

To find the best place to raise a family, we added some additional data sources. We expanded the demographics category to include the percentage of the population under the age of 15 and the percentage of families with children, awarding more points to cities with lots of kids.

We also added an entirely new category, measuring the cost and availability of childcare, worth seven points. If data wasn’t available for a city, we used figures from the closest one that did have available data. We awarded points based on the following subcategories: 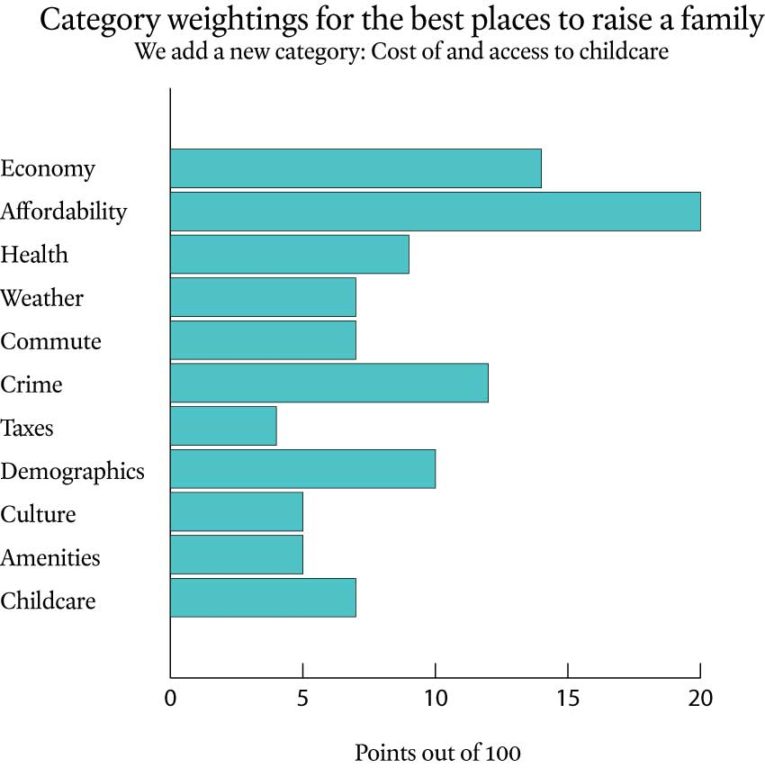 There are certain things you don’t have to worry about any more when you retire, such as finding a job or getting a university education. Other things, like healthcare and weather, become more important. To find the best place to retire, we reduced the weighting of or eliminated the former and beefed up the importance of the latter. 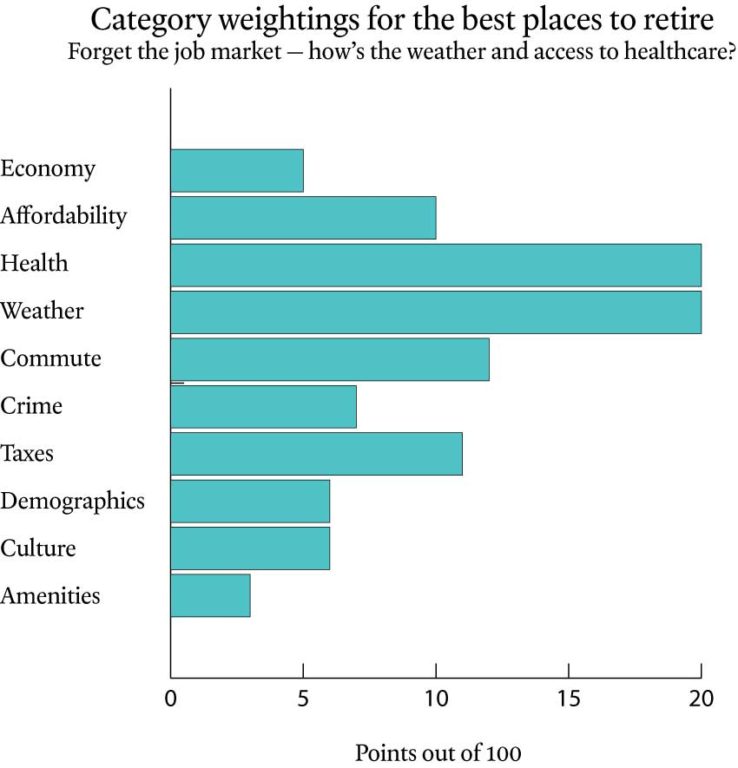 Like the best places for families, our ranking of the best places for New Canadians adds a data source to the demographics category. In an effort to identify cities with vibrant multicultural communities, we rank the percentage of residents who speak a language other than English or French, giving the most points to places with the most linguistic diversity. We also increased the importance of the unemployment rate, rent affordability and proximity to an airport. 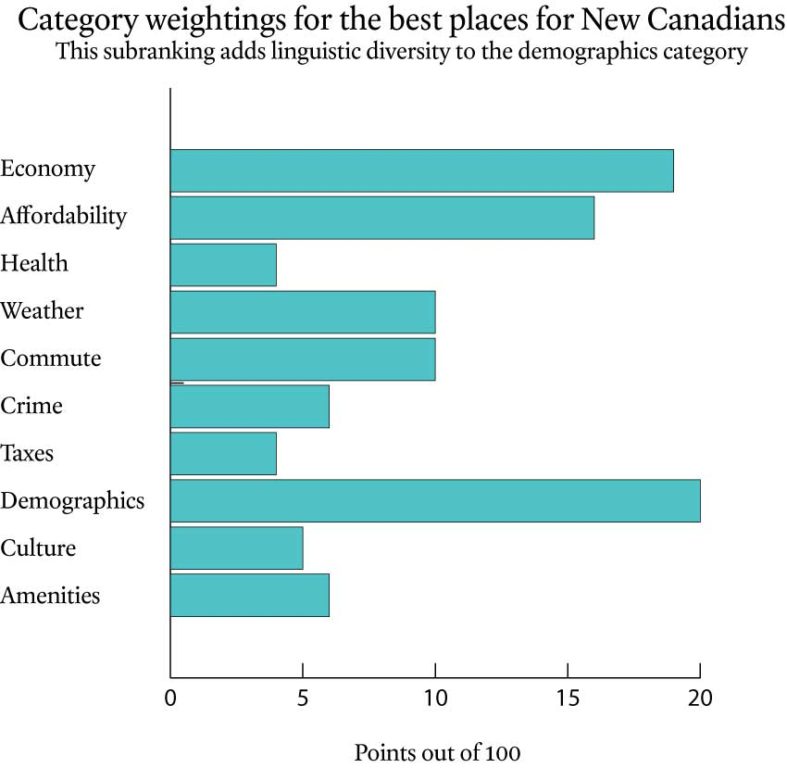