If your advisor won't talk about passive investment options, then maybe it's time for a second opinion

Let’s start with a question: how would you feel if you bought something based on the recommendation from a trusted source, only to find out later that they knew there was cheaper alternative that is just as good?

That, in essence, was the question I put to the audience during a keynote presentation I delivered to the Standard and Poor’s (S&P) third annual advisor symposium in Toronto this past September. The point of my appearance was to explain how I transitioned my advisor practice from commissions to fees and, more importantly, why others should too.

I warned the assembled advisors about the inherent bias commission models and embedded compensation structures create. It’s an important issue for investors, too, since they’re the ones paying them.

Here is a simple illustration to demonstrate the point. Let’s say there are two primary ways to access a stock market that, in any given year, returns 8%. Holding advisor compensation constant at $0, the passive (benchmark-replicating) option might cost 50 bps (0.5%) and the active (outsized return-seeking) option might cost 150 bps (1.5%). In both cases, the sum total of the universe of outcomes might look like the two normally-distributed bell curves shown here. 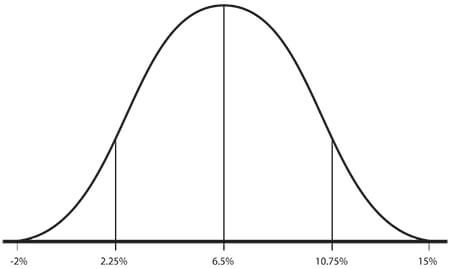 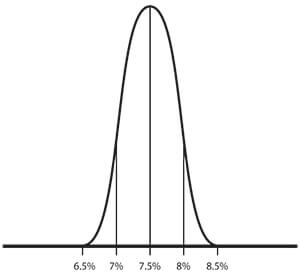 While there are other paradigms for investing (factor based investing springs quickly to mind), no one in the audience challenged the notion that these two alternatives represent the primary choice that most investors need to make. In aggregate, higher-cost active options lead to returns about 1% lower on average (because the strategies cost about 1% more), while also generating a substantially wider range of outcomes—relative to the market performance.

But here’s where I questioned the industry’s collective logic, professionalism and transparency. Behavioural finance teaches us that people are loss-averse and feel far better psychologically when they can avoid large losses. And yet, with the active option there is a greater chance investors will suffer a considerable shortfall relative to both market performance and the passive alternative.

Meanwhile, traditional finance teaches us that rational investors want to get the best bang for their buck. As such, they should also prefer the passive option because the expected passive return is 1% higher. This is true simply because the actual passive cost is likely to be 1% lower. In short, whether one takes a behavioural approach or a traditionalist approach to investing, it seems the passive paradigm ought to be preferred.

Indeed, when I point this out when I explain this choice to clients, there is almost never any disagreement that the passive option is more likely to yield a more favourable investment experience. And yet, there’s about ten times more money invested in actively-managed products than there is in passively-managed ones.

So I ask my question again: how professional is it to recommend the active option without, at the very least, stating and showing clearly that the passive option exists? For over a decade now, my impression has been that many advisors make recommendations based on which products are easier to sell rather than those that are more likely to help their clients reach their financial goals.