For richer or poorer is a common vow couples pledge to each other, but most don't talk about what that might mean until it's too late. 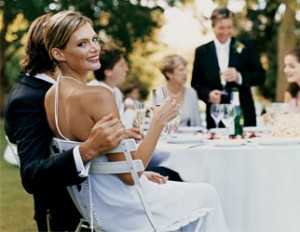 For the thousands of the Canadian couples who walk down the aisle each year many may think the toughest question they’ll ever have to ask is: will you marry me? But questions about kids, real estate, and money can overwhelm a young couple and take the spark out of a relationship.

This is a discussion that should happen before you get engaged, says Sheila Walkington, a CFP and co-founder of Vancouver-based Money Coaches Canada, but many put off the conversation about family financial issues until after they said their I dos. “It’s usually an uncomfortable conversation,” she says. “Some couples are open about it, but it’s one thing people to be  open and another being on the same page.”

She adds it’s not unusual to see problems arise years into the marriage because a couple didn’t have a frank discussion about their shared finances.

The main issue most young couples deal with is debt. Often, it’s a student loan that needs to be repaid or a throbbing credit card hangover from living large in singledom. It’s not uncommon for one person to bring more debt to the table than the other, says Walkington. “It creates a bit of an imbalance and it can be hard for the couple to move forward.”

It can be a roadblock to a shared goal. One person’s debt can impact the couple’s home buying options, their credit history and more, says Rona Birenbaum, a Toronto-based CFP with Caring For Clients. Paying it off should be the first priority.

There are a few ways to deal the debt that one person brings into a relationship. Some spouses, says Birenbaum, want the person who incurred the debt to pay it off. “It’s a philosophical decision,” she says. In that case, she recommends signing an agreement that says the debt is that spouse’s responsibility. If there’s nothing in writing then both partners will be responsible to pay off the outstanding balance in the event of a divorce.

In most cases couples opt to pay the debt off together, says Birnbaum. For this approach to work, newlyweds need to figure out their cash flow and decide how much they can afford to put towards debt repayment each month.

The challenge of course is that couples also want to save for a house, go on a honeymoon and start saving for kids. The solution? Compromise. “They have to focus on paying of a certain amount debt, while saving for the house. They may have to put off major travel until debt is paid off,” says Walkington.

In every marriage each person takes on a role. The same can happen when it comes to saving and spending: one person may be a spender while the other may be a saver. This can cause huge rifts in the family as one person may feel like he or she can’t spend a dime because the other is always shopping.

Behaviours are hard to change, says Birenbaum, but not impossible. Coming up with a financial plan to see how much the couple can spend each month can help. Once the big items, like groceries and RRSP savings, are covered, then it’s OK to spend a little money.

Setting spending limits is a good idea. “You can change people’s behaviours by setting parameters,” says Walkington. “Then it’s easier to make good choices and not overspend.” She suggests couples set aside a certain amount to spend each month, but once they reach that limit, that’s it.

Another thing newlyweds should talk about—if they haven’t already—are children. Not just about whether they plan to have any, but how they are going to afford them. Birenbaum always brings up the kids issue with her young clients. She doesn’t want to scare them off of having children, but thinks they should have a realistic idea of how much they’ll cost over their lifetime.

“It’s about $245,000 not including education,” she says. “You need to know how much it will cost now so you can deal with your finances. Many couples underestimate the cost of raising a child.”

With so many marriages ending over money issues, both partners need to have a clear understanding of the family finances. However, Birenbaum suggests appointing one person become the family CFO—someone who will take charge in making financial decisions. Someone needs to say on top of the bills, track expenses and make investments, she says. “Just like you decide who will take out the garbage, you need to figure out who will organize the finances,” she explains.

It’s also a good idea to have a joint account. Both Walkington and Birenbaum agree it’s easier to stay on top of money issues if cash is pooled together. It’s simple to see what’s coming in and what’s going out. “We encourage couples to think of themselves as a family and to not keep finances separate,” says Walkington. “People have to share and save together and pay down debt together. Don’t put the pressure all on one partner.”

Ultimately, whether it’s money, kids or anything else, there’s one key to a happy marriage: communication. Talk, talk and talk some more. “Both people need to be involved and have open conversations,” says Walkington. “Couples have to make decisions together.”