A spouse in the house 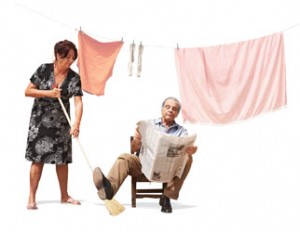 During the first few years of his retirement, Marjorie Edgeworth’s husband, John, used to pace outside the door of her Toronto home office waiting for her to finish work. “Every once in a while he’d stick his head in and say something like, ‘Marj, I saw a robin in the backyard!’” she recalls. Marjorie (we’ve changed the couple’s names to protect their privacy) was still working as a freelance writer, and the interruptions were like nails on a chalkboard, disrupting her concentration. “I wondered how we were going to do it,” she says. Couples often go through a period of adjustment after they retire, says Amy D’Aprix, a life transitions expert at BMO Financial. Here are some tips on how to retire without killing—or being killed by—your spouse:

“Many people never talk about how they see day-to-day life after retirement,” points out D’Aprix. “They talk about the big trips and the money—not about how much time they’re going to spend together and what that time is going to be like.” Her advice: look at a blank calendar and ask yourself how you’re going to fill those days “when every day is a Saturday.” You may be able to ease the transition by working part-time or volunteering.

For the Edgeworths, the key to re-establishing harmony involved open communication. “Look, you’re ready to retire, but I’m not,” Marjorie eventually told John. He explained that he was okay with her working?, but wondered if she might reduce her hours. “I’m working less now,” Marjorie says. “I respect the fact that he wants to spend time with me, so I have carved out certain times for that.”

When one partner is already at home most of the time, it can be hard for their newly retired spouse to plug into his or her existing routine. Recently retired nuclear scientist Dave Whillans had commuted each day from Toronto to Pickering for work while his wife stayed at home. “We led very separate lives,” he says. Now his wife, Gail, continues to attend fitness classes three days a week, while Dave runs. She does coffee with friends while he takes the grandkids biking. While the couple still make time for each other, Dave isn’t totally reliant on his wife to keep him busy. “Integrating into somebody else’s already established life is much harder than just looking after your own,” he says.

Many couples experience a renewal of the chore wars after retirement, says D’Aprix. It’s crucial to decide if you will move to a different division of labour. In the Edgeworths’ case, although John didn’t participate in many household tasks while he was working, he has since learned to do some cooking and laundry—which has gone a long way in smoothing out tensions between the couple. “It has taken time, but I’ve seen a big change,” says Marjorie