How to tap your RRSP 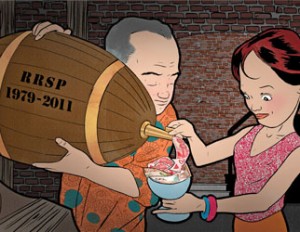 Kathy and Peter Franklin have figured out all the angles on their retire-at-55 plan. The Toronto couple, currently both 47, know how big a nest egg they’ll need, and how much they can spend in retirement. They’ve built a financial plan to help them save diligently and invest wisely along the way. But one thing has them stumped: “Once we get there, how do we get the money out without the taxes killing us?” Peter asks.

The usual advice is to draw income from your non-registered accounts, such as regular savings accounts, first. When that money runs out, then you can go after the funds in your RRSP or Registered Retirement Income Fund (RRIF). That’s because the money you withdraw from an RRSP or RRIF counts as income, and you have to pay taxes on it. So you want to put off drawing down that money—and paying those taxes—as long as possible.

But the Franklins (whose names we’ve changed to protect their privacy) ran their own figures using that strategy and got dubious results. So we talked to several experts who have thought carefully about the most tax-efficient way to draw down a retirement portfolio—and guess what? It turns out the conventional wisdom is dead wrong. “The conventional advice definitely does not constitute ‘wisdom’,” says Daryl Diamond, a financial planner with Diamond Retirement Planning in Winnipeg. He says retirees need to take a more balanced approach when drawing down their portfolios.

To see why, consider that if you draw down all your non-registered accounts first, you will eventually be left with a nest egg made up entirely of RRSP or RRIF money. Then when you reach 71, you’re suddenly forced to convert your RRSP to an annuity or RRIF and start taking minimum withdrawals. This can drive up your income, and because higher incomes are taxed at higher rates, you are liable to pay much more tax than you would have if you’d spread out your RRSP withdrawals more evenly.

It’s usually especially wise to draw on your registered accounts first if you retire before age 65, since you’ll need to bridge your income needs before Old Age Security and other benefits kick in. This can also help you avoid OAS clawbacks later, says Camillo Lento, a chartered accountant and lecturer at Lakehead University in Thunder Bay, Ont.

The bottom line is, it often makes more sense to withdraw some RRSP money before exhausting your non-registered accounts, even if you take a small hit, because it can help you avoid a much bigger tax bill later. Overall, Canada is quite generous to seniors, thanks to Old Age Security and tax breaks such as the Age Credit. But for higher-income seniors, the system often gives benefits with one hand and claws them back with the other. So any time you consider how much tax you’ll pay when you draw down your portfolio in retirement, you also need to consider the clawback of these benefits.

Determining the right drawdown strategy depends on your personal situation—in particular, the amount of income you expect to receive in retirement. Let’s look at the opportunities for retirees with low, moderate, and high incomes and help you determine what’s right for you.

If you don’t have much saved up for retirement and you expect to depend on the Guaranteed Income Supplement, then your best bet is to draw down any RRSPs quickly, preferably before you turn 65 and become eligible to collect GIS. That’s because each $1 of RRSP income after age 65 results in a clawback of roughly 50 cents from your GIS—equivalent to a 50% marginal tax rate. Since this clawback rate is so high, you’re better off pulling out RRSP money earlier, even if you have to pay some tax on it. It will undoubtedly be at a much lower rate than 50%. If you don’t immediately need the money to live on, transfer your early RRSP withdrawals to a Tax-Free Savings Account (TFSA). When you take out TFSA money later, it won’t have costly GIS consequences.

If you’re a senior with less than about $30,000 a year in income, you can earn a surprisingly large chunk of that income tax-free. That’s because the combination of the Age Credit and the Pension Income Credit (which only seniors get) plus the basic personal credit (which every taxpayer gets) can shield you from federal taxes on the first $19,000 of your taxable income. (The provinces offer similar credits, but their tax-free zone is not usually as large.) Once your income moves beyond $19,000, you leap into the first federal and provincial tax bracket. There you will pay a combined rate of 20% to 28%, depending on your province.

Because of that jump in your tax rate once your income crosses the $19,000 a year threshold, the objective for seniors with moderate income is pretty simple: take out as much of your RRSP and RRIF money as you can while remaining in the tax-free zone.

The following example shows how it can work: Say you’re a retired senior living in a province where the tax-free zone is your first $19,000 of income, and you need $28,000 (after taxes) to cover your expenses this year. You receive $12,000 in income from Old Age Security, the Canada Pension Plan, and interest from bonds and GICs in non-registered accounts. That means you will need to withdraw an additional $16,000 from your portfolio to cover your cash flow needs. So, do you take that $16,000 from your non-registered account (which isn’t taxable) or your RRSP or RRIF (which would be reported as income in the current year)?

If you followed the conventional advice and took everything from your non-registered account, then you’d be passing up a golden opportunity to take out some of your RRSP or RRIF money tax-free. Here’s why: because your income from other sources is just $12,000, you can withdraw up to $7,000 in RRSP and RRIF money and still stay within the $19,000 tax-free zone. If you don’t make that withdrawal now, you may have to pay a substantial amount of tax down the road, when your non-registered funds are depleted and you’re forced to make larger concentrated RRSP and RRIF withdrawals. You can meet the rest of your spending needs by taking another $9,000 from your non-registered accounts.

By taking this balanced approach, you not only pay no income tax in the current year, you also shield yourself from tax that would have been payable on future RRSP and RRIF withdrawals. Pretty neat, huh?

When you’re a retired senior with taxable income beyond $30,000 or so, you have left behind the pleasant vistas of the first tax bracket and entered more rugged fiscal highlands. Now the tax rates increase, and the clawbacks of government benefits begin.

There are several major tax bumps to look out for. The specifics vary depending on your province, but in most cases you will cross into the second provincial tax bracket somewhere between $30,000 and $41,500, at which point your marginal tax rate jumps two to five percentage points. As well, you will see some of your federal Age Credit clawed back starting at about $33,000. This clawback is equivalent to increasing your marginal tax rate by more than two percentage points. You jump to the second federal tax bracket around $41,500, causing you to suddenly pay an extra seven percentage points in taxes.

In short, the next big income threshold you’ll hit after $19,000 is at $41,500. “That’s a number we want to keep our eye on,” says Ross McShane, director of financial planning at McLarty & Co. Wealth Management of Ottawa. For example, at about $41,500 you go from a 24% to 31% tax bracket if you live in Ontario. In other provinces, your combined marginal tax rate at $41,500 jumps to somewhere between 30% and 38%. So your goal should be to smooth out your taxable income from year to year in order to keep it below that threshold.

Beyond $41,500, there are two more thresholds to keep in mind. The next is when your income reaches $67,700, because that’s when Old Age Security begins to be clawed back. Each dollar of income over that amount results in a clawback of 15% from OAS benefits, so it’s equivalent to adding 15% to your overall tax rate.

The final threshold we’ll look at here hits at $83,000. At that point, you’ll have reached the third federal tax bracket and you’ll begin paying a combined marginal rate of somewhere between 36% and 46%, depending on your province. When you add in the impact of the OAS clawback, you’re in for a shock. At $83,000, you’re effectively paying a 51% to 61% marginal tax rate. “You want to avoid that situation by any means possible,” says Lento.

You may think that you’ll never have to worry about finding yourself in these high tax brackets. But not so fast: if you draw down your non-registered accounts first, then your untouched RRSPs can grow remarkably large. Then you’re forced to convert them to an annuity or RRIF at age 71 and start taking minimum withdrawals. (You have to withdraw 7.4% from your RRIF the year you turn 72, and the percentage rises with your age.) That can easily push you into a much higher tax bracket than you anticipated.

What’s more, when one spouse dies, his or her RRSPs and RRIFs are typically transferred to the survivor. The prescribed withdrawals could now apply to a combined amount that’s suddenly twice as large, which effectively doubles the minimum drawdown. “Many people have large accumulations of RRSPs which they’ve deferred, deferred, deferred, and then bang. They lose flexibility, they lose control,” says financial planner Diamond.

When the surviving spouse dies, then any remaining RRSPs or RRIFs become taxable. If these balances are large, the estate will pay a hefty tax bill.

In the Franklins’ case, drawing down all their non-registered money first before touching their RRSPs and RRIFs doesn’t make any sense. A balanced drawdown strategy will work much better. With two above-average professional incomes, no kids, and moderate spending, they expect to accumulate about $3 million by the time they retire in eight years at age 55. They plan to have about half of their savings in registered accounts. Then they envision spending about $84,000 a year (net of tax, in 2011 dollars) on a very comfortable, but not lavish, retirement. “We’re not big spenders in terms of expensive cars, clothes and jewelry, but we like to spend money on dining, travel, theatre,” says Kathy.

According to Diamond, by adopting a balanced drawdown strategy, rather than drawing on all their non-registered accounts first, the Franklins can expect to save a lifetime total of about $170,000 (in 2011 dollars). The Franklins’ situation won’t be the same as yours, but it’s an example of why it pays to look closely at how drawdowns will impact your taxes. “A lot of people don’t think about taxes, and it is often the largest expense for someone in retirement,” says Diamond.

Whatever your withdrawal strategy, keep in mind that you should draw down your savings in a way that doesn’t skew the asset allocation in your nest egg away from your target by drawing too heavily on stocks or bonds. As long as you keep that allocation where it should be, smoothing out the mountains and valleys in your income could help you save big on taxes—and add tens of thousands of much-needed dollars to your retirement savings.