The right way to draw down on retirement savings

Stave off retirement ruin with some quick math

The problem with rules of thumb is that time and circumstances can make them out of date. Such may be the case with the time-honoured safe withdrawal rate of 4%—a rule of thumb attributed to William Bengen, an American financial planner and author. Bengen coined the term “SAFEMAX” to describe a realistic maximum annual withdrawal percentage from retirement nest eggs that would not result in “retirement ruin.”

Bengen published his findings in the October 1994 issue of the Journal of Financial Planning, later popularizing them in the book Conserving Client Portfolios During Retirement. His safe 4% annual withdrawal rate was dubbed “The 4% Rule” or “The Bengen Rule.” It described the maximum annual withdrawal rates (adjusted for inflation) that ensure investors won’t outlive their money over a 30-year retirement. Over a decade later, in 2006, Bengen loosened the rule a bit for U.S. investors, for withdrawal up to 4.5% for tax-sheltered investment accounts and 4.1% for taxable ones.

However, in these days of minuscule and sometimes negative interest rates, financial planners are more cautious about 4%, some preferring to pencil in 3%. (In the last issue of MoneySense, it was noted that the rule may be too high a percentage for those aged 65 but too low for those 75 or older.) Even the same journal that Bengen was in later published The 4% Rule is not Safe in a Low-Yield World, by Wade Pfau. It argued that unless bond returns revert to their historical levels within 10 years, 32% of nest eggs would “evaporate early.” In a Morningstar article, Pfau added that a nest egg with 40% in equities could withdraw only 2.8% a year initially to have a 90% chance of lasting 30 years. Yet, in 2013 T. Rowe Price found a portfolio with 60% stocks could use an initial withdrawal rate of 4.3%.

Clearly, retirees living on capital must pay close attention to asset allocation, tax efficiency and actual spending levels. Markets have a lot to do with it, unpredictable though they may be. In the original 4% formulation, Bengen used the worst 30-year retirement period in the last 90 years: the 1973-1974 recession had both high inflation and deep market declines. The Vanguard Group suggested “a more dynamic approach” that varies withdrawal rates with market performance. It found a 50/50 asset mix and a 3.8% withdrawal rate adjusted to inflation would have an 85% chance of lasting over 30 years.

Whether you go with a cautious 3% or a more aggressive 4% or 5% rate with expectations of slowly digging into capital over time, retirees should keep in mind that linear projections cannot indefinitely be projected into the future. Doug Dahmer, president of Burlington-based Emeritus Retirement Solutions, says retirees must factor in years when spending will jump well beyond normal withdrawal levels. Typical expenditures will be house-related maintenance like replacing a roof or furnace, buying a new car, or costly “once in a lifetime” world tours.

Then there’s inflation. The calculation is relatively simple. Note Bengen’s 4% is used when opening the portfolio at retirement. That fixed dollar amount is adjusted for inflation each subsequent year. For example, with an opening balance of $500,000, 4% is $20,000 in the first year. With a 2% inflation the withdrawal amount will be $20,400 the following year. If inflation were 3% the year after that, then you’d multiply $20,400 by 1.03 to get $21,012.

Despite all the variations, one advisor still likes and uses the 4% rule. John DeGoey, portfolio manager with Toronto-based Industrial Alliance Securities Inc. and author of The Professional Financial Advisor, uses a tweak he calls the “Rule of 16.” He says sustainable depletion rates depend partly on the age you start to draw down a portfolio. “The earlier you start, the lower the necessary depletion rate.” DeGoey divides the number 16 into the client’s age for a target “safe depletion rate number” indexed to inflation. So if you retire and start to draw down your portfolio at 64, dividing by 16 gives you exactly the 4% annual withdrawal rate. Retire earlier and the rate drops; retire later and the rate rises, which is what you’d expect. Someone who retires at 72 can take out more than 4% and feel safe, DeGoey says: “Unless we have another 1930s cycle, or that person lives to 103!” 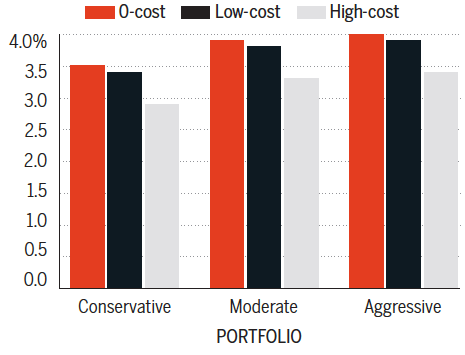 Jonathan Chevreau is Founder of the Financial Independence hub and co-author of Victory Lap Retirement. Read more of his Retired Money column here.