The new rules of retirement

A closer look at the financial repression facing your nest egg

If you’re anything like my dear departed father, you may not need to read any of my new “Retired Money” columns, which are dedicated to solving money management challenges for retirees. You see, my dad was an Ontario high-school teacher and the fortunate beneficiary of the famous defined benefit (DB) teachers’ pension plan.

He didn’t need to worry about investing—he owned only GICs and would proudly declare that he didn’t know a stock from a bond. Unlike you, dear reader, he didn’t need to. With a paid-for home, his GICs, teacher’s pension and government CPP and OAS, Dad was laughing in his classic “do-nothing” retirement. He could take long walks, read to his heart’s content and entertain neighbours with glasses of sherry. Oh, and cheer for the Montreal Canadiens.

His two sons, and readers of their generation, may be less fortunate. For starters, only a minority of workers enjoy the kind of inflation-indexed guaranteed pension that Dad—and his widow—enjoyed. Second, most of us would be lucky to generate 2% a year if those GICs were held today, versus 5%-plus a generation ago. Third, while Dad lived to 87, today’s retirees should worry about longer life expectancies. Longevity is both a blessing and a curse. If you have good genes and a healthy lifestyle, your increased long life means you may be negatively impacted by the new normal of low interest rates and the lack of a real pension for life. You have a better chance of running out of money before you run out of time.

A fourth wrinkle in your fortune is inflation. It’s low and appears innocuous now but remains an inevitable and insidious destroyer of wealth and purchasing power. The longer you live, the more inflation will degrade the quality of any retirement nest egg you have managed to construct. 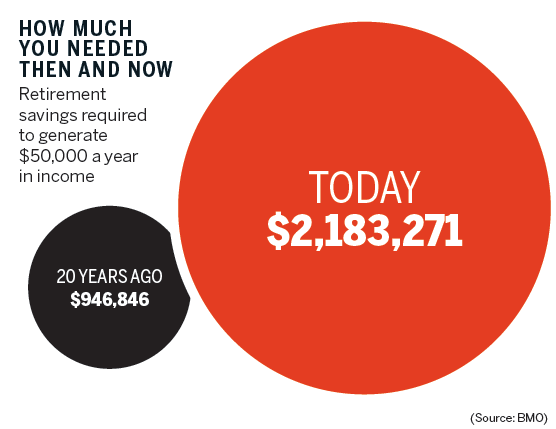 It’s a terrible pity that modern employers are loath to offer the kind of DB pension my dad enjoyed. This is why the Liberal government and all provinces but Quebec saw fit to “modestly” expand the Canada Pension Plan. Too late for those already or nearly retired but for today’s young people, an expanded CPP will be the closest thing to the pension my father enjoyed (not as good, but close).

Even after CPP is fully expanded, it will cover off only about a third of your working income (a rise from 25% of pensionable earnings which it has been doing). To generate the rest of the income needed, it will be necessary for you to read publications like this one and take responsibility for learning about investing. When companies shed DB pensions or no longer make them available to new hires, they are dumping responsibility for your financial future from their own shoulders onto those of their employees.

Low interest rates and inflation can be blamed on government, by which I mean the world’s central banks (including Bank of Canada) that dance to the tune of the mighty U.S. Federal Reserve.

It’s a shame about declining pension coverage but it’s a downright crime what governments are doing to savers. Far from encouraging us to save, those same low rates continually tempt consumers to go deeper into debt. You can be a saver, sure, but you’ll pay for it. As retired actuary expert Malcolm Hamilton told me, “We have a crisis with central bank policies and negative interest rates, which makes saving [outside tax shelters] more or less futile.”

Interest income is taxed at the top marginal rate, higher than “risky” assets like stocks. Investors whose main wealth is in RRSPs, TFSAs and non-registered investments are caught between the rock of minuscule (or even negative) interest rates and the hard place of risky stocks, which at today’s nosebleed valuations could severely correct at any moment.

There’s a phrase for this war on savers: financial repression. It’s a travesty, but I do not see this changing in what’s left of most of our lifetimes. How to cope with it will be the raison d’être of this column. There’s never been such a strong need for help in handling your investments in retirement, to fight back against the repression. “Retired Money” will make that fight its mandate, while also looking at semi-retirement because, sadly, many of us will not be able to afford the “Full Stop at 65” my father enjoyed.