Outdoor playsets for any budget

Look out the back window: Whose toys are bigger, yours or the children’s? The popularity of outdoor entertainment spaces—all those kitchens, cabanas and water features—have served to transform the spaces behind our homes. What was once practically a zone of negative space (albeit one that might include a pool) has become almost another room in the home, even in wintry Canada.

But there’s good reason to let the kids have some space of their own. Back in the mid-2000s, journalist Richard Louv coined the phrase “nature deficit disorder” to describe kids’ alienation from the outdoor world and its impact on their health and development. An investment in outdoor activity is an investment in their well-being. And it’s not necessarily difficult or even expensive to build a fantastically fun backyard for kids. Here’s how to plan an outdoor oasis your kids will love.

Consult the kids. An age-appropriate planning meeting will help stoke their interest, and if you involve them in planning and assembling their dream backyard you might even hold off some of the impatient “is-it-done-yet?” whining. It’s also wise to use your magic parenting psychology to nudge them away from unrealistic notions (municipal rules, you may point out, forbid castles with actual crocodile-stocked moats) and toward simple, affordable ideas. Some bare-bones backyard ideas that will thrill the socks off children for less than a few hundred dollars: see-saws, hopscotch courts, tire swings and trampolines.

There are also DIY projects for every skill level. A simple framed sandbox requires little more than a trip to a large hardware store to pick up some cedar timbers, sand and gravel. Head to the web or the library for ideas: Two especially thorough volumes to shop for online are Sunset Outdoor Design and Build Guide (2012) and Black & Decker’s Complete Guide to Backyard Recreation Projects (2010).

Make it theirs. For other ways to engage kids without draining your bank account, cater to their interests. For sports fans, you could build a batting cage for between $500 and $1,000, inclusive of the netting and the pitching machine, or erect an NBA-approved basketball hoop for as little as $250. A young camper might enjoy a teepee. Examples made in the traditional way start at around $450, though larger ones run into four figures.

Beehives and chicken coops are not only fun but educational (not to mention productive, if you manage to get some eggs or honey out of the bargain), but you should check with your municipality to see if they’re legal in your town. Vegetable gardens, meanwhile, are a source of fascination to many children and legal just about everywhere.

Think big. Of course, the focal point of just about any school-age kid’s dream backyard is a play structure—whether it’s a playhouse, swing set or jungle gym. And in terms of peer envy, a tree house is the childhood equivalent of a private island.

“There are playhouses that are nicer than my house,” says Jordan Morningstar, a farmer from Goodlands, Man., who has a side business making kids’ “sandbox diggers,” which he sells on Facebook under the name Bert’s Town Construction. His two boys (Derek, 5, and Malcolm, 3) play on a set he picked up from a big-box store for under $1,000: “It’s got absolutely everything on it,” including a swirly slide, two swings, a clubhouse on the bottom and a climbing wall on the far side. But it’s not maintenance free. “The paint pretty much faded instantly. You do have to put some work into it.”

Barrett Brown, owner and president of CedarWorks of Rockport, ME, argues it’s worth spending more for a high-quality playset. Most of his company’s American-made playsets cost between US$1,500 and US$5,000, but can grow as large and elaborate as the customer’s imagination (see story at right). They’re built with Northern white cedar, which is rot- and insect-resistant and should last 20 years—longer than most childhoods, notes Brown—and look stunning.

“The swing set is potentially going to be the largest and most visually impactful thing that people are going to put in their backyard,” says Brown, “There’s absolutely no reason not to consider aesthetics, especially because they probably thought about that when they did their landscaping, when they invested in their home.”

But before going online to punch your credit card number in for a backyard Taj Mahal, remember that for all the wonders we can buy children, there’s nothing’s quite as amazing as their own imaginations. Last year Morningstar had to dig a shallow hole to lay a pipe on his property, and didn’t cover it over in time for a birthday party. “All the kids just jumped in, and that was it—just a bunch of five-year-old boys playing in a hole.”

Build it and they will come

For less than $1,000, you can pick up a swing set or jungle gym from a big box store. But semi-custom playset makers like Eastern Jungle Gym or Rainbow Play Systems offer sturdy North American-built structures for most budgets. The following examples are from CedarWorks based in Rockport, ME.

This relatively straightforward swing set (approx. $3,500) includes a lookout tower and is made from Northern white cedar, known for its durability in cold climates. It’s not the fanciest, but it’s built tough enough to outlast most childhoods. 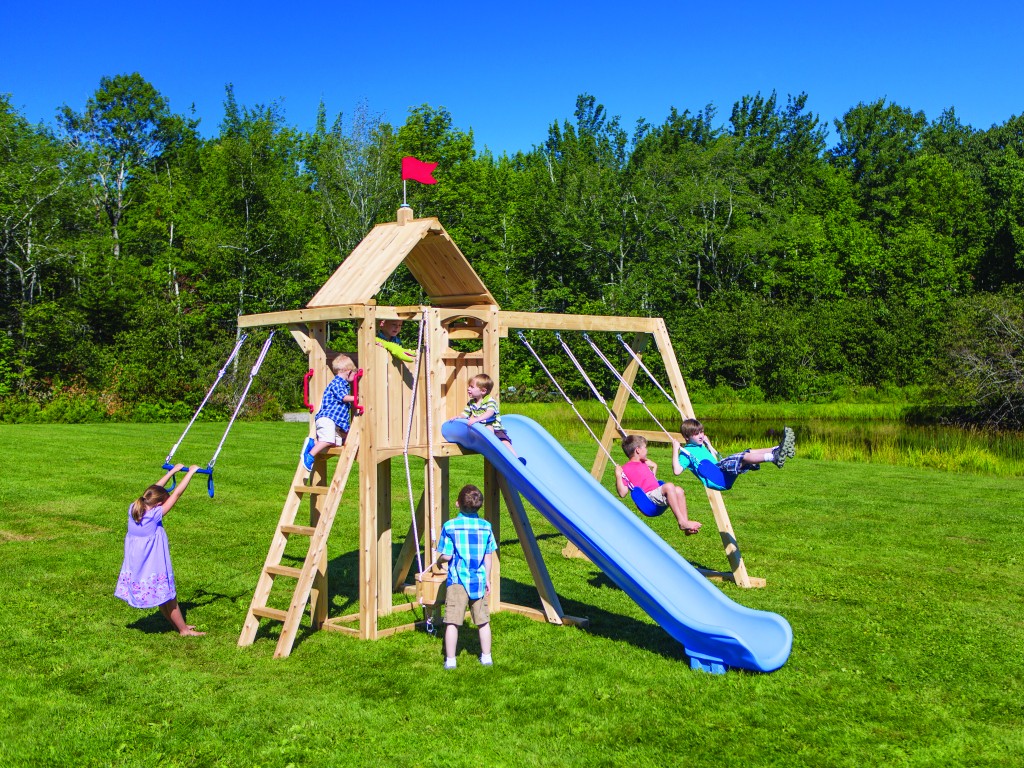 A rope and bucket pulley system gives kids an early lesson in physics.

Because custom playset makers’ equipment is modular you can add to your children’s playscape as they grow—and grow tired of the same old castle. This model (approx. $9,100) comes with three different slides, for variety’s sake. 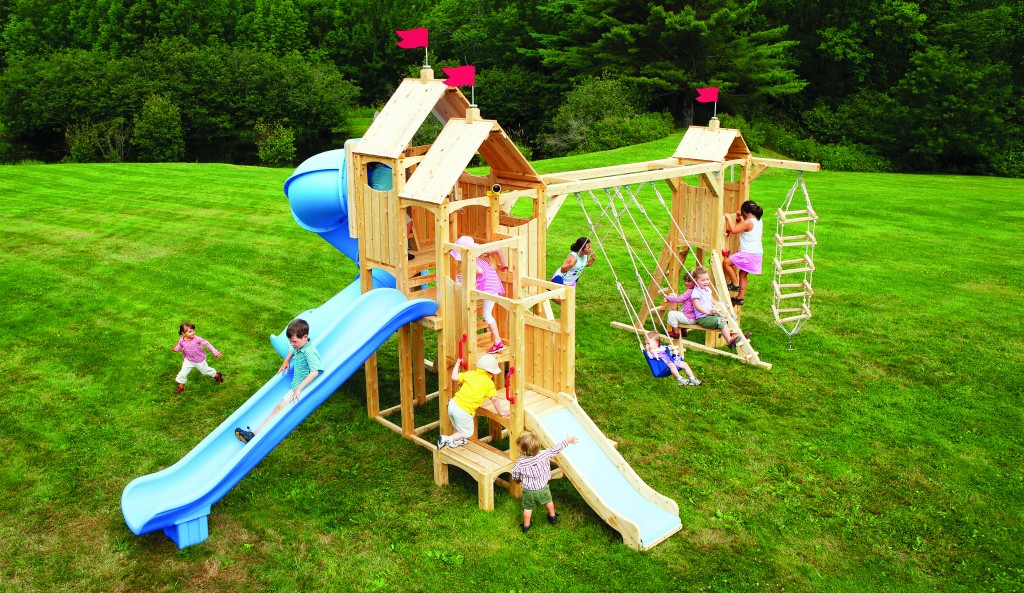 Over the top? Sure. But who doesn’t have an inner kid yearning to erect this in the backyard? Here’s hoping you’re a crack lemonade maker: With this playset (approx. $22,000), you’ll be entertaining the whole neighbourhood. 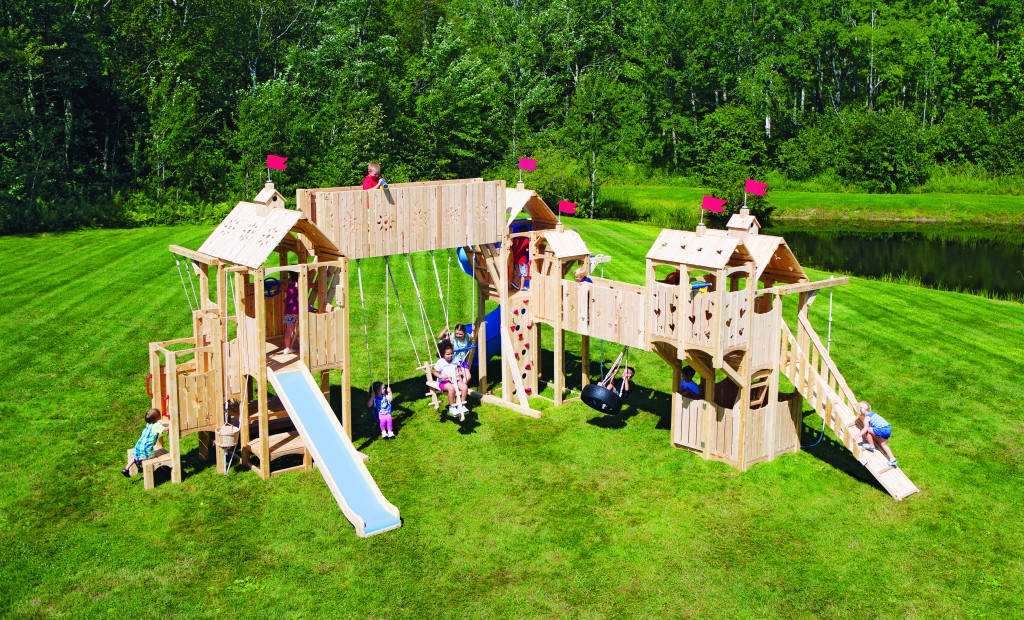 A lookout tower complete with gangway and working telescope.