How Anne and Rene paid off the mortgage within 5 years

Part 2 in our 4-part series on how to crush your mortgage. If Anne and Rene can pay off their mortgage in less than 5 years, maybe you can too. 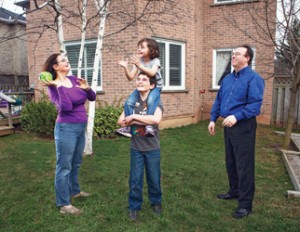 Good parenting explains, in part, how Anne and Rene Langevin, shown here with their children Ethan and Paige, were able to pay off their ?rst home within less than ?ve years. “Growing up, I was always taught to save money,” says Anne.

Such good habits served the couple well when they received cash gifts the year they were married. “We kept the money. We didn’t blow it,” says Anne. Along with those funds, and other money they had diligently saved, the Langevins—who now live in Oakville, Ont.—were able to put a $70,000 down payment on a $210,000 Toronto-area home back in 1998.

Before the purchase, while the couple was still living in an apartment, they never bought anything that wouldn’t be appropriate for a full-sized home. “Everything we purchased was always intended for a house,” says Anne.

They also bought only new items for their house with cash. “When we ?rst moved in, we took turns sitting on the ?oor for six weeks because we had only one La-Z-Boy recliner. Then when we’d saved enough money, we bought a couch. We weren’t killing ourselves with credit-card bills.”