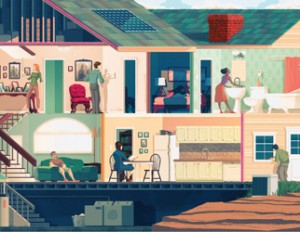 Two years ago Reiner Hoyer lived in a squat 1950s-style bungalow in the north end of Toronto. Like most houses of that era, it was drafty, poorly insulated and cost a fortune to heat and cool each year. Today the bungalow has been transformed into a two-storey home, complete with three large bedrooms, hardwood floors and a basement apartment. But despite more than tripling the size of his home, Hoyer’s utility bills are about $1,200 for the year, a third of what he spent on his old bungalow, and less than half the national average.

Hoyer, a renovation consultant, took advantage of the latest energy-saving technology to dramatically lower the cost of living in his home. He doesn’t even have a furnace: triple-paned windows, super-insulated walls and solar panels are some of the features that keep his house comfortable year round. Hoyer also cut his water bill by installing a rainwater cistern in his backyard to supply his toilets. Not only is his home one of a kind, it’s one of the most energy-efficient homes in the country.

The average homeowner spends $2,234 a year on water, gas and electricity, costs that are likely to rise as we run out of cheap energy and our power grid starts showing its age. While Hoyer may have gone to extremes, there are many cheap and easy upgrades regular homeowners can do to reduce monthly expenses. In the pages that follow, you’ll visit our energy-efficient house, where we cost out exactly how much you’ll save for each home improvement. We hope you’ll get some ideas you can put into practice. Not only will you start seeing a payback almost immediately, you’ll also add to the long-term value of your home.

One of the most painless ways to cut your heating and air conditioning bill is to install a programmable thermostat, says Kim Pressnail, associate professor of civil engineering at the University of Toronto. “It’s the easiest thing to install yourself.” And the payoff is fast. “For every degree in the winter you turn your thermostat down, you save about 5% on your heating bill,” he says. In the cool months, program the thermostat to drop by 3°C or 4°C when you aren’t home, and simply reverse the settings in the summer.

It might surprise you that the most cost-effective solution in reducing your energy bills is the humble act of plugging air leaks. A surprising 30% to 40% of your heating or air conditioning is lost to air leakage, says Pressnail. Small gaps around wall joists, the foundation, windows, baseboards, the attic and wall sockets let air escape. They’re small, but they add up. Taken together you might have a hole the size of a basketball.

Based on Pressnail’s calculations, the air will change 10 times an hour inside a typical Canadian home, meaning new air comes in from outside that must be cooled or heated. Lowering that level can equal big savings. Sealing leaks with weatherstripping and caulking can save a homeowner as much as $108 a year or about 2.9% on their energy bills, says Walton. Considering the low cost of materials, the payback is quick. Plugs and light switches in exterior walls can also allow air in, but they can be fixed with a simple $2 gasket from your local hardware store.

Insulating the attic hatch is another important job. “The attic hatch is an outside door,” says Stephen Collette, a certified building biology environmental consultant. “Most people don’t think of it that way.” The temperature in the attic should be the same as it is outside. For this reason that hatch needs to be insulated with weatherstripping and a latch to keep it tightly closed and air-sealed.

A professional might save you more money. You can pay to have a typical home built in the ’60s or ’70s sealed for $2,000 or $3,000, says Pressnail. Best of all you can measure the improvements. The company will do an air seal test before and after the procedure so you can see it working. A professional can lower the number of air changes to as few as four an hour, saving the average homeowner about $500, or 20%, annually on their energy bill.

If your house is prone to huge temperature swings, chances are you don’t have enough insulation. Topping up the insulation in your attic and basement is an easy fix, and it’s also a cost-effective way to lower energy bills. In most cases, you want to have insulation that is at least the height of the joists in the attic, says Dave Walton, Direct Energy’s director of home ideas. You can quickly bring the insulation value up from R-20 to R-50 by blowing in some loose fill insulation on top of what’s already there. (R values measure the effectiveness of insulating materials: the higher the better.) There are even do-it-yourself kits if you’re comfortable doing the work—it’s pretty easy for the average handyman.

How much of a difference will it make? Pressnail has crunched the numbers. A 1,860-sq-ft detached two-story home built in the 1970s in Barrie, Ont.—which he says represents the average Canadian home—may have an insulation value of R-10 in the attic. Upgrading to R-50 could save a homeowner $175 a year, or about 6% of their energy use.

Fully insulating the walls of your basement will also give you some noticeable savings. Most basement walls are only partially insulated at best, so even improving the insulation on those walls to a meager R-16 value will cut total energy use by about $130 a year. If you’re thinking about doing some of the work yourself then pick up the free book Keeping the Heat In, available online from Natural Resources Canada.

Still, Pressnail advises having a professional look at your attic before you blow in extra insulation, because you have to make sure it’s air-sealed. “Inefficient buildings are wonderful at keeping assemblies (interior structures of the roof) dry since most of the warm moist air that seeps into the attic ends up leaking out in the winter. But when you add insulation and you have warm moist air from the home leaking into a colder attic space, then you have the potential for condensation.”

Most experts agree the best approach is to remove the existing insulation and start fresh. They recommend putting down a layer of spray foam first, which will air-seal the attic, then blowing in cheaper loose-fill insulation on top.

Windows offer big potential energy savings, but the payoff may not be as large as you might think: It can take 25 years or longer to recoup your investment. Quite simply, windows are expensive to replace compared with the cost to heat and cool your home. But if your windows are losing their insulating value and are due for replacement anyway, it’s worth spending the extra money for higher quality ones, explains Pressnail. For as little as 10% more, you can get windows that are at least 50% more efficient. “That is a phenomenal payback,” he says.

Homeowners should consider sealed, “low-E” argon-filled double-glazed units—or better—when installing new windows. Also consider thermal blinds as a stylish way to beef up your insulation, says Hoyer. These blinds, made by Hunter Douglas and other companies, have a honeycomb-like structure that acts like a blanket against your window. The company claims they can reduce heat loss through windows by up to 40% and cut solar heat gain by as much as 80%.

Of course if you get new windows, you want to make sure they are installed properly and air-sealed. If they aren’t, it won’t matter what quality of window you put in.

Appliances account for 14% of energy use and are the third biggest draw on hydro bills. Upgrading all your appliances to Energy Star rated systems can cut that part of your bill by as much as 30%.

New Energy Star–rated fridges cost as little as $50 a year to operate. Keeping your fridge away from heat sources, with adequate air circulation and good seals on the doors, will also lower your bills. Today’s washing machines are also much more efficient: new Energy Star models use at least 59% less energy than the minimum federal energy efficiency standards. Modern dishwashers, meanwhile, are about 30% more efficient than older models. New models typically only use about $30 of energy each year.

While some of these amounts are small, the savings add up over the appliances’ lifetimes. Over the years, a fridge will save you $85, a dishwasher up to $50, and a washing machine $672. You’ll feel good about doing your part for the environment, plus you’ll have more money in your pocket for every single month you live in your home.

Keeping cool can be expensive, especially when the average homeowner keeps the thermostat set to a frosty 22°C. If your central air conditioning system is older than 15 years it might be time to replace it, says Walton. Older units tend to have an operating efficiency of 8 or 10 SEER, or seasonal energy efficiency ratio. (You should be able to find this information printed on the AC unit.) A modern 14-SEER unit uses about 30% less electricity to operate.

If your furnace was cranking out heat in your home when Titanic was playing in theatres, it’s time for an upgrade. Furnaces have come a long way in the past 15 years. Older furnaces operate at about 60% efficiency, which means for every dollar you spend about 40 cents goes straight up the chimney. “By replacing a conventional furnace with a high-efficiency one, homeowners can save up to $500 a year,” says Walton. Also, remember to change the air filter in the furnace every three months to keep it at optimal performance.

The truth is, there’s no financial incentive to conserve water—it’s so cheap that some municipalities don’t even charge for the stuff. Reducing hot water is where the real savings come into play, says University of Toronto’s environmental engineering chair Bryan Karney. While devices that restrict water use have been around for a while, early adopters were put off by their poor performance. Shower heads trickled, toilets didn’t flush and washers didn’t wash. However, technology has improved rapidly in the past few years; there have been significant improvements in performance and water use in everything from dishwashers to shower heads. “By and large you can use a lot less water than you thought you needed and still get a very comfortable shower,” says Karney.

Tankless water heaters, on the other hand, may not have benefits that outweigh their extra cost. Karney says these heaters work best when the hot water is used close to the unit, but in a typical house, water may have to travel several floors before it flows out of the tap.

At the same time, traditional hot water heaters have improved. Data from the Office of Energy Efficiency, a division of National Resources Canada, back that up. In fact, energy efficiency ratings of tankless and water storage heaters are almost identical these days. Given how close they are in terms of efficiency, for now you’re probably better off spending $500 upgrading to a modern hot water heater.

How long will it take to recoup all the extra money you’ll spend on energy efficient upgrades? Check out our photo gallery to find out.

Plus take video tour of a Toronto home that’s so efficient it doesn’t need a furnace.