Get buff, not broke 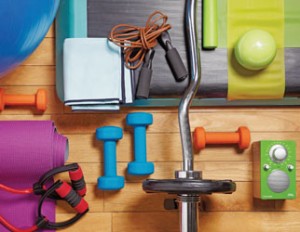 I used to be in shape. Really. Two hundred push-up, 20 chin-up kind of shape. I would blaze through 50-km ski trails. That, of course, was then.

As the decades piled up, exercise became less important, less frequent. Injuries began to take their toll, further limiting my activity, and at some point I came to the realization that nachos, not eggs, were nature’s perfect food. The predictable result is that today I am but a shadow—a soft, blurry-edged shadow—of the 140-lb athlete of yore.

While I’ve made my peace with the long dénouement of middle age, occasionally, when I glance at old photographs or step carefully around the bathroom scale, I can’t help wondering: What if I decided to set up a home gym and turn back the clock just a bit? What would it take? How much would it cost? And where would I even start?

If you build it, will you come? Yes, you can construct a home gym for less money than you might think. But should you? “Home gyms aren’t for everyone,” acknowledges Shantelle Meaney, kinesiologist and fitness supervisor at Calgary’s Preventous Collaborative Health. “Some people need to get out of the house or they simply can’t motivate themselves to exercise regularly. The biggest mistake people make is they have big dreams of getting fit, and they go out and spend a ton of money on equipment like a treadmill that they never end up using.”

Indeed, the neglected home gym, replete with Bowflex coat racks and fossilized elliptical trainers, is a universal cliché. “The best time to buy fitness equipment is a month-and-a-half after Christmas,” points out Wayne Boucher, fitness and wellness coordinator at Fitness Zone, the massive school gym at Algonquin College’s main Ottawa campus. “Exercise gear is given as Christmas presents or purchased as part of a New Year’s resolution to get fit, and by mid-February it turns up for sale on websites.”

In order to avoid making these kind of expensive, guilt-laden mistakes, Meaney suggests starting any home gym project small, and building upon it only if you actually make use of it.

A room with a view (of yourself). It’s hard to get a workout in when you’re beset by screaming kids or overflowing laundry hampers. “When you’re setting up a gym, it’s important that you make the space your own, a refuge from all the hectic distractions of the home,” says Meaney. “Ideally, you want a dedicated room with a door that you can close so your workout isn’t interrupted, perhaps with a stereo to help block out external noise.” Oh, and at least one full-length mirror—a mere $20—to see yourself from head to toe is important. “If you can watch your form and technique as you exercise it will dramatically lower your chances of injury,” says Meaney.

Adds Boucher: “Sometimes it can be as simple as pushing the coffee table to the side of the living room, laying down a six-foot-square yoga mat, which you can buy for $100, and you’re good to go.”

Ottawa Senators conditioning coach Chris Schwarz agrees that modern home gyms don’t have to be big. “We’re moving away from machines where you can do eight exercises and it takes up a whole bunch of space,” says Schwarz, who, in addition to training elite hockey players, runs the Fitquest chain of Ottawa-based studios specializing in exercise rehabilitation. As for mirrors, he says they can be useful, but advises caution. “Mirrors can be counterproductive because they lead people to work on the muscles they can see, like biceps and pecs, but not the one’s they can’t see, like triceps or back muscles, which can lead to imbalances and problems with posture.”

What are you training for? OK, you’ve got your space, with or without mirrors, stereo and floor mat. What about the actual exercise equipment? What you buy should depends on your objectives—weight loss, cardio fitness, strength training or some combination thereof—but it’s not quite as simple as that. “People looking to lose weight think it’s all about cardio, getting the heartbeat up and burning calories,” says Boucher. “What they don’t realize, though, is that cardio exercises alone aren’t enough. After three weeks or so your body adjusts and you stop losing weight.” Instead, a combination of cardio and resistance training is best for weight loss and overall fitness—even though that message itself is sometimes resisted. “My female clients often don’t want to do resistance training because they think it’ll add muscle bulk and increase body weight, but that’s not true. It’ll simply tone muscles and add definition.”

Dumb and dumber. “A set of dumbbells should be part of every home gym,” says Meaney. “Either the three weights you think you’ll use most often, like five, 10 and 15 lb for women, or, better yet, one of those good quality adjustable sets.”

Adds Boucher: “Adjustable dumbbells that add plates with the click of a switch, from two to 50 lb, are a great foundation for a home gym. They’re compact and provide a virtually unlimited palette of exercise options.”

A stable stability ball. If Charles Atlas saw you exercising with a stability ball—nothing more than a reinforced beach ball, really—he’d undoubtedly kick sand in your face. And possibly pull a hamstring, groin or abdominal muscle in the process. That’s because old-time iron pumpers were all about muscle isolation exercises for maximum bulk and, unfortunately, minimal flexibility. Modern trainers know better, which is why, next to dumbbells, a good quality stability ball tops the list of prescribed home gym accessories.

“A lot of people have poor balance and low core strength,” points out Meaney. “With a stability ball you can do abdominal crunches, squats, hamstring curls, body bridges—a ton of different exercises. They’re inexpensive, easy to store and they can double as a bench when working with dumbbells.” A word of caution: “Don’t buy the see-through ones you can find at big-box stores. They could end up popping on you, leading to serious injuries. The good quality ones they sell at fitness outlets have been tested to several times your body weight.”

Strike up the bands. Resistance bands are deceptively low-tech and extremely versatile. In their simplest form, they’re nothing more than a roll of elasticized plastic banding or tubing you can cut to length and use in place of dumbbells for any number of exercises where light to moderate resistance is required. More advanced systems come with handles and door attachments. “Strap it to a door, table or bench, and it’s a cheaper version of a universal machine,” says Meaney. “You can do lat pull-downs, standing chest presses, squats, shoulder-related exercises.”

For tougher, more advanced workouts, a number of so-called suspension training systems have been developed. “Systems like TRX or the Human Trainer involve straps you can attach to ceiling trusses or doors, and your body weight becomes the resistance,” says Schwarz. “They’re light, compact, don’t cost more than a couple hundred dollars, and you can do 50 to 100 exercises with them.”

Don’t skip the cardio. Move about a bit and get the ol’ ticker working. “Skipping is a brilliant exercise,” says Boucher. “Not only is it a fantastic cardio workout, but that up-and-down motion tightens the muscles around the organs, strengthening your core.” And if your ceilings are too low to accommodate skipping? No problem: There are now “ropeless” skipping ropes on the market—weighted handles, basically—that mimic the benefits of skipping without scraping or scuffing interiors.

Says Meaney: “Try developing a cardio circuit, where you move from skipping, to jumping jacks, to aerobic steppers—anything that keeps the heart rate up. It doesn’t have to be expensive or high tech.”

“Indeed,” agrees Schwarz, “setting up two pylons and doing lateral shuffles between them will give a much better workout than, say, riding a stationary bike, which is just a single repetitive movement.”

Big ticket items. Fine, but what if you really want one of those impressive contraptions: the elliptical trainers, spin cycles or Bowflex-type machines? If you love running, but not during the winter, by all means get yourself a home treadmill. Know what you’re getting into first, though. “Some treadmills are like running on a slab of concrete, some like running through a fluffy field,” says Schwarz. If you want the fluffy field type, be prepared to pay: “A top-of-the-line Woodway treadmill costs between $8,000 and $10,000, whereas a more modest Precor treadmill, also good, will run you $2,000.”

Elliptical trainers, meanwhile, present their own problems. “A lot of them have patented movements, so they can’t be adjusted,” says Schwarz. “A movement that might be right for a five-foot woman might not be right for a six-foot-five man.”

As for traditional cable-and-weight-stack machines, he calls them “very dysfunctional” because the locked-in motion can lead to repetitive strain. Instead, he recommends buying a stand-up functional training system with adjustable arms “so the cables aren’t always coming from the same angles.”

Fit, not bankrupt. Again, all this stuff can cost a fortune. In addition to using websites like Kijiji to find barely used exercise equipment at steep discounts, you can also contact equipment manufacturers or retailers. “Gyms are always going out of business, or they lease from the manufacturers, so there’s a lot of gym-grade refurbished equipment out there that’s selling for about the same price as you can get home-quality machines new,” says Boucher. “Go to Fitness Depot or Life Fitness or manufacturers like Precor and ask.”

But maybe dumbbells, balls and bands are good enough. After all, says Boucher, “the poor man’s gym works as well as the rich man’s gym if you’re putting the same work in.”