Are your finances going nowhere? Subconscious money ‘truths’ may be holding you back. 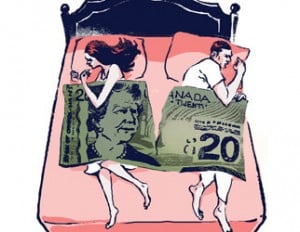 Ramona Reed is standing on the street corner just outside a local thrift store, waiting to give her money away. She’s watched several people leave the shop with bags full of clothes and trinkets, but she hasn’t yet found what she’s looking for. Then she spots them — a young single mom with three small kids. Reed, a pretty petite blonde with sparkling blue eyes and ruby lips, approaches them and strikes up a conversation. She learns that they live in the poorest part of town and can barely make their mortgage payments. They have no car, no stove, no fridge — they simply can’t afford it.

Reed tells them her story — that she originally came from a poor family with 10 children, but now she’s married to a wealthy man and she wants to help others. She buys them a used car for $2,000 and a fridge and stove for $800 more. She has a lot of money, she tells them, and doesn’t need it all. She wants to help. “Money burns a hole in my pocket and I feel compelled to spend it or give it away to others,” says Reed, 53. “It makes me feel like I’m not a screw-up — I’m good for something after all.”

Ray Harper, Reed’s husband of six years, feels differently. (We’ve changed their names to protect their privacy.) He’s threatening to divorce Reed if she doesn’t change her ways. Harper comes from a wealthy family and is a successful businessman in the tech industry. He gives his wife a $6,000-a-month allowance, intending the money to be spent on entertaining his friends and family, or buying art and decorative pieces for their high-end townhouse. When he found out that Reed was spending the money on perfect strangers, he got angry. He told her he couldn’t live with someone who wasn’t trustworthy. He wrote her a cheque for $50,000, put all her clothes and personal belongings in storage and told her to go away — and stay away — until she’d gotten herself “fixed.” “I’m determined to save my marriage,” says Reed. “I’ll do anything to change my ways so that I can be wise with money.”

Reed is one of several people I met last fall at a workshop for people with severe money disorders in Nashville, Tenn., called Onsite. You can think of it as a kind of money rehab clinic. During five days of group therapy the participants examine a slew of unhealthy, self-destructive behaviours. The workshop was eye-opening. I learned that although full-fledged debilitating money disorders such as hoarding, workaholism and compulsive shopping aren’t the norm (it’s estimated that only 5% of adults have one), such disorders often have their roots in common emotions and thought patterns.

In any of us, destructive unconscious thoughts and feelings can hinder our ability to make sound financial decisions. “The truth is, you’re only as sick as your secrets and people with money disorders keep a lot of secrets,” says Ted Klontz, a psychologist and life coach who, along with his son Brad (also a psychologist), runs the Onsite program. The Klontzs are also the authors of Mind Over Money, and Wired for Wealth, two ground-breaking books in the field of financial psychology. “When people come for help around money, it goes so much deeper than what is in their bank accounts,” says the elder Klontz. “It’s a window into unresolved family histories and generational patterns. It’s often unresolved traumatic childhood events that end up triggering money disorders.”

The Nashville workshop’s aim is to uncover those secrets and reveal how they encourage bad money habits. Such ingrained beliefs, or “money scripts” as the Klontzs call them, are powerful ideas that we form around money — what it is and what it can do for us. Typically, we form these beliefs in childhood and they drive all of our financial behaviours. A money script could be that ‘Money will make things better,’ which is associated with hoarding and workaholism, or ‘There will never be enough money,’ which is associated with underspending and miserliness.

We can show signs of more than one money disorder, in varying degrees, in varying situations, and at varying times in our lives. But the underlying scripts rarely change — at least not without conscious effort and hard work. If you want some insight into what may secretly motivate the ways you handle money, or you think someone you know may have a money disorder, read on for an in-depth look at the seven most common disorders. I’ll show you how to spot them, and just as importantly, what you can do to overcome the hidden disorders that may be holding you back from achieving the financial success you dream of.

Purchasing a life insurance policy is the pinnacle of...