What not to do with a $10 million jackpot - MoneySense 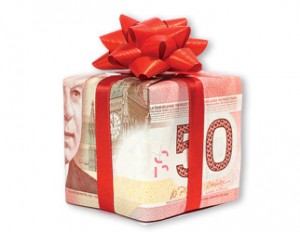 On the weekend, the Toronto Star referenced a Hamilton Spectator story about the winner of a $10.6 million lottery who managed to blow through all but $750,000 in less than a decade.

When I posted a link to the Spectator’s original story to various social media, it sparked a fair bit of commentary. I was incredulous—gobsmacked, you might say—that anyone could be so financially illiterate as to waste such a gift of early financial independence. Most of us can only dream of ever amassing that much wealth in a lifetime of hard work.

Any financial planner worth his/her salt could tell you that if you could generate a 4% investment return annually from $10 million, that’s a whopping $400,000 a year of income. Yes, a balanced portfolio of stocks and bonds could probably do better than that: perhaps 6%. On the other hand, if you really wanted to play it safe even a GIC could give you a 2% annual return: enough to spin off $200,000 a year for life, albeit gradually losing ground to inflation and being subject to the highest level of tax.

Sadly, it appears this lottery winner (Sharon Tirabassi, 26 when she won in 2004 and now 35) was either given no sound financial advice whatsoever or didn’t follow it if she was. She should have adhered to this basic principle: never break into capital. In this case, the $10.6 million is the capital and it should have been regarded as sacred. The goal from the get-go should have been to live only from the interest and dividends derived from that capital.

As it happens, there are plenty of publicly traded stocks that can pay a 4% dividend and it may even be achievable with certain exchange-traded funds (ETFs) with a focus on dividends. Presumably, most of this nest egg if invested would generate taxable income so a GIC would result in interest income taxed at the highest marginal tax rate. (In fact, once the nest egg was cut in half, she did start to generate interest income with it). Even preferred shares would likely generate more income and receive the same favorable tax treatment as common stock dividends.

Generous to a fault?

Now, I recognize that almost $3 million was given away to needy friends and relatives. It’s hard to criticize such generosity but one does question the wisdom of gifting away that much precious capital. If the nest egg had generated $400,000 in some combination of interest and dividends, and assuming 30% goes to taxes on investment income, that would have left our lottery winner with $280,000 a year to live on.

Even a religious person who believed in tithing 10% of their income to a church would limit their givings to $28,000 (if 10% of net) or $40,000 (if 10% of gross). At most, gifts to family should have been made on an annual basis along similar lines. Handing out million-dollar gifts at one fell swoop is what I’d term “generous to a fault.”

I have no problem with buying a big home: while described as “massive,” a $515,000 principal residence is hardly an egregious purchase these days. For some inexplicable reason however, she had to take out a $360,000 mortgage to buy it a mere two years after winning the lottery. But the purchase that really made me scratch my head was the $200,000 Cadillac, complete with turntables and mixing studio (she also had three other cars). Then there were the multiple spending sprees in  Mexico, Vegas and elsewhere. Clearly such expenditures were digging directly into capital.

“Easy come, easy go?” There’s an element of the old adage in this story, I suppose. Most of us are lucky to amass even $1 million over a lifetime of working and saving, let alone ten times that amount. Luckily for the rest of us, the very process of earning money and living frugally to accumulate an investable surplus tends to be a sobering enough experience that we learn to respect capital, not squander it. Stories of lottery winners wasting their unearned bounty, on the other hand, are sadly all-too-common.

A friend quipped on Facebook that she’d consult me first if she ever won the lottery. No need now, Cathy, since it’s all in this blog. Of course, as I told her, it wouldn’t hurt to subscribe to MoneySense magazine and maybe get a copy of Findependence Day, if only to come to a better appreciation of what financial independence is all about.

But as anyone who reads MoneySense also knows, unless you’re a highly sophisticated investor with both the time and inclination to invest on your account, most of us need good financial advice. A lottery winner like the “penniless millionaire” is clearly a candidate for investment counsel. At a minimum, someone from our online list of fee-only financial planners (currently being revamped) should be consulted.