Newfound wealth had this farmer needing an adviser. But educating himself reaped bigger rewards.

After spending more than a decade raising chickens, John Boyson, 50, and his wife Ingrid, 49, were ready to sell their farm in Elora, Ont. In 2004, John estimated the sale of his chicken quota would pay out $1.1 million, an amount that would make his family instant millionaires. The decision to sell the farm had been easy. After all, John had developed a stubborn hacking cough and breathing problems that resulted from toxic fumes from chicken dung and feathers. What was difficult was deciding who he could trust to oversee his riches.

John had visited three local financial advisers but wasn’t overwhelmed by their sales pitches. The advisers wanted to charge him 1.5% a year to manage the Boyson windfall. Add to that management fees of about 1.5% for his mutual funds and the Boysons’ total investing costs would soar to 3%, or $39,000 a year. “It sure looked expensive,” John said. In fact, all John wanted was a conservative, well-diversified portfolio that could generate $45,000 a year after tax. The couple figured they could live on that amount in three years, when Ingrid planned to retire from teaching. Should he manage his money himself? “Or should I swallow the fee and leave it up to the professionals?” he asked.

10 years later. I spoke with John, now 60, just as his flight was landing in Costa Rica. He planned on staying for a month—a trip he takes every year in February. He and Ingrid sold the family farm immediately after talking to MoneySense in 2004. The couple, now retired, earned more than they anticipated for the chicken quota: $1.4 million. With some of their newfound wealth they bought an older home in Stoney Creek, Ont., where they spent a lot of time and effort on renovations. “It was a labour of love,” says Ingrid.

As for the rest of the money, they hired a boutique firm to manage it. “I chose the firm recommended by MoneySense’s experts because of its investment philosophy and because they charged us just 1% of the portfolio value annually, which was their going rate.” The annual returns were good but when the big stock market correction occurred in 2008, “I decided that I had learned enough to manage our portfolio myself,” says John.

That’s a good thing, because John has averaged a 10% annual return (including dividends) since then. He takes out about $80,000 per year in dividend income and trades only about four stocks a year, preferring to keep a stable of big blue-chip stocks to do the heavy lifting.

“We travel, do volunteer work and spend a lot of time with our three adult kids,” says Ingrid, whose youngest son is in university. “John breathes a lot easier these days. I don’t think his health will ever be 100% again but he bikes and runs and helps me with the gardening. That’s all we ever really wanted.” 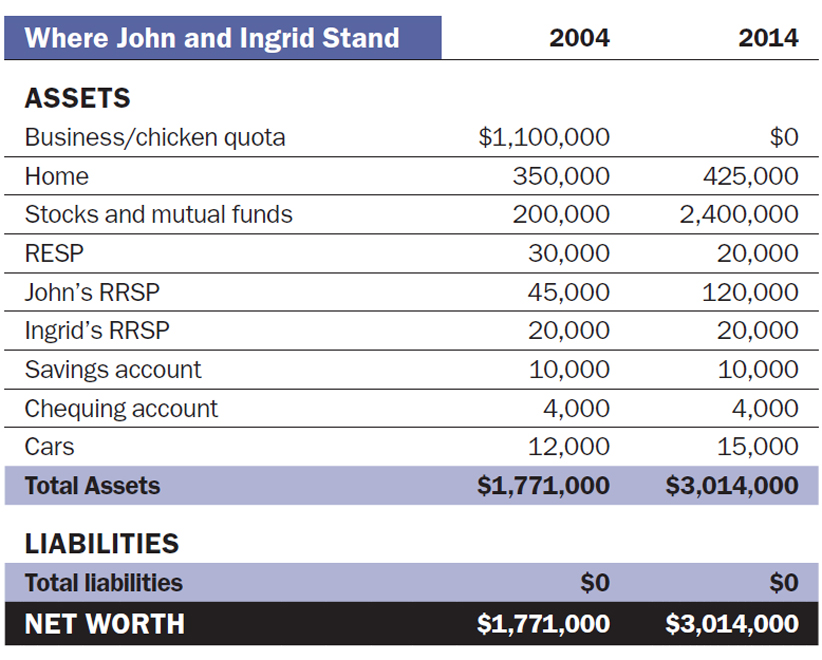