Use Norbert's gambit to get rid of those currency exchange fees when trading your Canadian dollars for American ones. 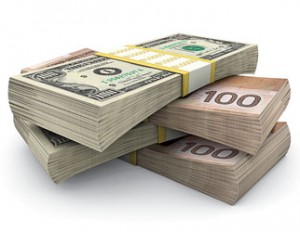 If you trade online and you want to exchange your Canadian dollars for U.S. greenbacks, prepare to get gouged. Most discount brokerages charge a fee of about 1.5%—or a whopping $150 on a $10,000 transaction. But we’re going to let you in on a little-known technique that virtually eliminates currency exchange fees. It’s called “Norbert’s gambit,” after Norbert Schlenker of Libra Investment Management in Salt Spring Island, B.C. As far as we know, he pioneered the idea of using shares listed on both Canadian and U.S. exchanges to exchange your currency for less.

Thanks to the new Horizons U.S. Dollar Currency ETF, Norbert’s gambit is now easier than ever. This ETF is available in two versions. The first, with the ticker symbol DLR, is bought and sold in Canadian dollars, while the second, DLR.U, trades in U.S. dollars. The difference in price between the two versions reflects the current exchange rate: at press time, DLR was trading at $10.18 Canadian, while DLR.U was priced at $9.96 U.S.

You’ll pay two commissions and lose a little on the bid-ask spread, but you’ll still save big overall. Note that this technique only works if you can hold U.S. dollars in your account. Most brokerages don’t allow this with RRSPs.