See you at Harvard

The best present for Junior? An Ivy League education 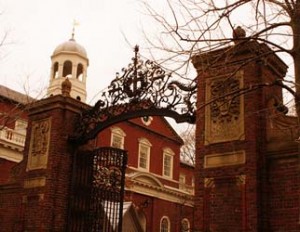 Your teenager may already be dropping hints about the car he wants when he graduates from high school. But you may want to consider a gift that’ll take him further in life than a hot set of wheels: a degree from an Ivy League university.

The 16,000 or so students from around the world who are admitted each year to these eight elite U.S. institutions enjoy some of the best educations in the world. At Yale, for instance, undergrads can sign up for a course called Amazon Rain Forest Expedition and Laboratory, which includes trekking to Ecuador with their prof to study rare plant life. Graduate students can debate faith and globalism with former British PM Tony Blair.

When Whitney Laughlin attended Harvard in the mid-1980s as a graduate student, she was mentored by John F. Kennedy’s secretary of health, education and welfare. “I got to go to his house once a week for tea and to talk over my papers,” recalls Laughlin, now a Victoria-based educational consultant who helps promising students get into top schools across North America. “I felt like I was rolling in chocolate! The kind of resources you find there….”

The schools that make up the Ivy League are Harvard, Yale, Princeton, Cornell, Dartmouth, Brown, Columbia and Penn. All of them are located in the northeastern U.S. and all of them — as their collective name suggests — are old enough to boast ivy-covered walls. Most were founded back when the U.S. was still a British colony and even the relative newcomer, Cornell, dates back to 1865. But it’s not just old stones and weathered residence halls that give these schools their clout. They boast star-studded faculty rosters and alumni directories that read like an A list of celebrity and power. Both Barack and Michelle Obama are Ivy alumni, as is George Bush. So, for that matter, are Matt Damon, Natalie Portman and Conan O’Brien.

Tuition alone at an Ivy runs about $35,000 (U.S.) a year, compared to $5,000 or $6,000 at Canada’s top universities. Remember, though, that you’re buying your child a lifelong legacy. Rather than delivering vast, anonymous lectures to hundreds of students, as so many Canadian universities do, Ivy League schools pride themselves on offering their students individual attention. At Princeton, there’s one faculty member for every five undergraduates.

When kids graduate from an Ivy League school, they earn paycheques in keeping with the quality of their education. The most recent College Salary Report by PayScale, a Seattle firm, says the median starting salary for an Ivy League grad is 32% higher than for those who chose liberal arts colleges. According to PayScale, Ivy Leaguers will still be ahead a decade into their careers, raking in 34% more than non-Ivy Leaguers.

The hefty financial payoff makes Ivy League tuition sound nearly reasonable — but your child’s shot at an Ivy League education hinges on more than you being able to cover the fees. All of these schools, but Harvard, Yale and Princeton especially, enforce admission standards that reject all but the highest-achieving teen. An A average and valedictorian status are strictly ho-hum stuff; your kid better be a concert-level musician or top athlete, too. Harvard rejects 91 students for every 100 who apply — and most of the rejected applicants are the best students in their high schools.

So what do you have to do to get your kid into an Ivy League school? Start by thinking of the admissions process as a project that begins in elementary school. At a minimum, your child has to be a stellar student. And academic prowess is just the beginning. “We estimate that over three quarters of the students who apply for admission to Yale are qualified to do the work here,” says the Yale website. “The great majority of students who are admitted, however, stand out from the rest because a lot of little things, when added up, tip the scale in their favor.”

Just what might help your kid stand out? Athletic achievement is good, says Laughlin, the college counsellor. She’s working with an excellent student who’s also an excellent sprinter, so the plan is to find out which schools “need someone to run the 100 metres” and apply there.

Hailing from outside the U.S. might work in your kid’s favor. Admissions officers at the Ivies strive to create a mix of students from a wide range of backgrounds, which could result in the gifted kid from Manhattan being passed up in favour of, well, Laughlin’s client from a small town called Pincher Creek in Alberta. She thinks her client has a great shot at Harvard not only because of his phenomenal vocal music skills (Harvard offers a program with the New England Conservatory), but because of his address: “If he were from San Francisco, he wouldn’t be nearly as appealing as he is from Pincher Creek.” She encouraged yet another of her Canadian clients to apply to Brown, which she calls “the quirky Ivy,” because of the girl’s ability to write economic policy statements. The key in all these situations is to decide on your “hook” — your unique selling point. Then figure out which university is looking for that kind of student, and play up your unique features in the admissions essay.

Or you could hire someone like Laughlin to do that legwork for you. The Independent Educational Consultants Association estimates 22% of freshmen attending private colleges have hired a college consultant. The hotshot in this field is Michele Hernandez (author of A is for Admission: The Insider’s Guide to Getting Into the Ivy League and Other Top Colleges), who charges as much as $40,000 per kid. She isn’t shy about her success rates, claiming on the home page of her business website (www.hernandezcollegeconsulting.com) that 24 out of 29 clients were accepted at Ivy League universities for 2006/07.

And if your kid doesn’t get in? Don’t lose heart. For Laughlin’s money, there are many other universities as good as the Ivies. Depending on your kid’s interests, they may be even better. Still, she concedes that prestige looms large in the minds of many of her clients. “A lot of my kids from Asia are focused on the schools they’ve heard of — Stanford, the Ivies.” When she suggests alternatives that might be a better fit for their ultimate career goals, their response is “Oh, my God, I could be going to a school I’ve never heard of!”