Who couldn't use some tips for investing in this crazy market? 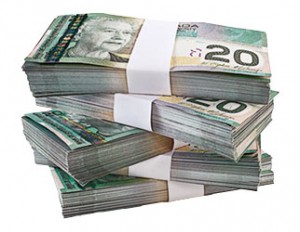 The legendary financier T. Boone Pickens called his memoir The First Billion is the Hardest. But for those of more modest means, the first thousand may be the most difficult to invest. Most people with just a fistful of dollars have little experience or confidence when it comes to managing money. And while your bank won’t turn you away, you’re not likely to find a financial adviser who’s thrilled about taking on your four-figure portfolio.

But as student Vince Sweeney discovered, there are plenty of options for those who are just starting out. In 2009, Sweeney read about the introduction of Tax-Free Savings Accounts and thought they sounded like a good deal. The markets were still in the dumps after the meltdown of the previous fall, and he saw it as a buying opportunity. “I did some research, and my first purchase was a dividend fund from my bank, which had a $500 minimum,” says Sweeney, who was just 19 at the time. “Then I just started contributing every month.”

After about two years with his bank adviser, Sweeney opened a self-directed account and started managing his own money. Now in his fourth year at the University of Waterloo in Ontario, where he’s studying math with the goal of becoming a teacher, Sweeney will graduate with a portfolio worth about $5,000. When he retires decades from now with a comfortable nest egg, he’ll be able to trace it all back to that first $500 contribution.

“It can be really powerful starting young,” says Neil Jain, founder of Money Life Skills in Toronto. It doesn’t matter if you have just a few bucks. “It’s about cultivating the habit. The value is in the process of learning about the types of accounts, understanding your time horizon and risk tolerance—all of those things are more important than the actual amount you’re investing.”

If, like Sweeney, you’re keen on growing your wealth but you’re not sure how to get started, these tips can help you get the most out of your first grand:

Pay off your debt first
One quick note before we look for a place to invest that extra $1,000. Jain stresses that you first need to make sure you’re routinely spending less than you earn, and that you have no high-interest debt. “If those two conditions are not met, then don’t even consider investing,” he says. “One of my recent clients had credit card debt of over $5,000, and he was asking me whether he should put money into a Tax-Free Savings Account.” Jain explained that paying off a typical credit card gives you a risk-free 19% return—that’s something you can’t get from any investment.

Stash some cash
Once you’re free of credit card debt, Jain recommends that your first couple of thousand dollars go into a savings account earmarked as an emergency fund. “That gives you some peace of mind, so if you suddenly lose your job you will at least have the next month’s rent covered.” Online banks such as Ally and ING Direct pay the highest rates, and you can withdraw the funds any time without a fee.

Give your money some context
Once your emergency account is set up and you have an extra $1,000 or so available to invest, ask yourself what the money will be for. “It’s really important to be clear about your purpose,” says Jain. “Are you investing for the very long term, or are you saving up for something in five to 10 years?” If your time horizon is measured in decades, you can afford to invest all your money in equities—assuming you can stomach the risk. But if your goal is just a few years away, you need to be more conservative.

Sweeney will graduate in 2012 and expects to tap his investments in about five years, perhaps to buy a home. With that in mind, he’s not willing to put it all at risk in stocks. After opening an account with a discount brokerage, he split his money equally among the TD Canadian Index Fund, the CIBC US Broad Market Index Fund and the TD Canadian Bond Index Fund. For now, most of his future contributions will go to the bond fund. “I’m young, but a loss of even a couple of hundred dollars is a lot for me now. I’ll sleep better knowing that there is a smaller chance of losing money.”

Get with the plan
Before opening a self-directed investment account, first pay a visit to your HR department at work, Jain recommends. Many employers have group RRSPs that make saving easy, even if you’re starting from zero. The contributions come right off your paycheque, and some companies even match them.

Diversify
Jain likes to show his clients a chart of three stocks he bought in 2000. One of the companies went bankrupt in 2002, while another has lost 95% of its value. The third—Microsoft—is down more than 20% over the last 11 years. His lesson is simple: putting all of your money in a small number of stocks can easily destroy your savings.

While it’s easy to build a diversified portfolio of individual stocks if you have a six-figure sum, it’s almost impossible to do it with a few thousand dollars. Better to follow Sweeney’s example: he gets access to the equity markets through his index funds, each of which holds hundreds of stocks.

Don’t get locked in
Jain suggests that new investors simply visit their bank and ask about opening a mutual fund account, but he stresses that you shouldn’t sign anything during your first meeting. “The bank always wants to get you set up immediately, but the act of not making that decision right away is helpful, because it makes you think twice and ask more questions.”

One of the questions you should ask is whether the mutual funds you’re offered have deferred sales charges (DSCs), which are triggered if you sell the funds within six or seven years. You don’t want to be locked in to any fund—or any adviser—for that long, so you should insist on no-load mutual funds, which do not carry these sales commissions. (See “Where to invest $10,000” on the right for more on picking mutual funds.)

Keep fees in perspective
Savvy investors know that high mutual fund fees quickly erode your returns. However, when you’re investing a small amount of money, keep these fees in perspective. ING Direct’s Streetwise Funds, for example, are a convenient way to get a diversified index portfolio in a single fund: you can get them online without an adviser, and without opening a brokerage account. The funds charge a management fee of 1.07%, which is high by index fund standards, but works out to less than a dollar a month on a $1,000 investment. That’s a lot less than you’ll pay for most actively managed mutual funds, and it’s a perfectly good starting place for small investors who should be primarily concerned with developing the right investing habits.

TFSA or RRSP?
The usual advice is that young people with small amounts to invest should opt for a Tax-Free Savings Account rather than an RRSP. The reason is that RRSPs don’t offer much in the way of tax breaks to people in a low tax bracket. Indeed, as a future teacher who expects a generous pension in retirement, Sweeney figures his tax bracket is as low as it will ever be. “I will probably never be making less than $10,000 a year again,” he says. “So there’s no point in contributing to an RRSP now.”

However, Jain argues that small investors shouldn’t discount RRSPs altogether. “If the goal of your investing is retirement, the RRSP is often the better choice. The risk of using a TFSA is that you may be tempted to take money out for another purpose. With an RRSP you’ll think hard before you withdraw from it.” Early withdrawals from an RRSP are subject to withholding taxes, and you never get the contribution room back.

Wherever you decide to start your investing journey, you can be sure of one thing: you’ll make some missteps along the way. But it’s far better to make mistakes when you’re young and investing small amounts. For now, worry less about specific funds in your portfolio and more about good habits.

“It’s all about discipline,” Sweeney says. “Save regularly, save often. As a mathie, I know the power of compound interest, and I know I’ve got time on my side.”