With trade uncertainty out of the way, expect higher rates 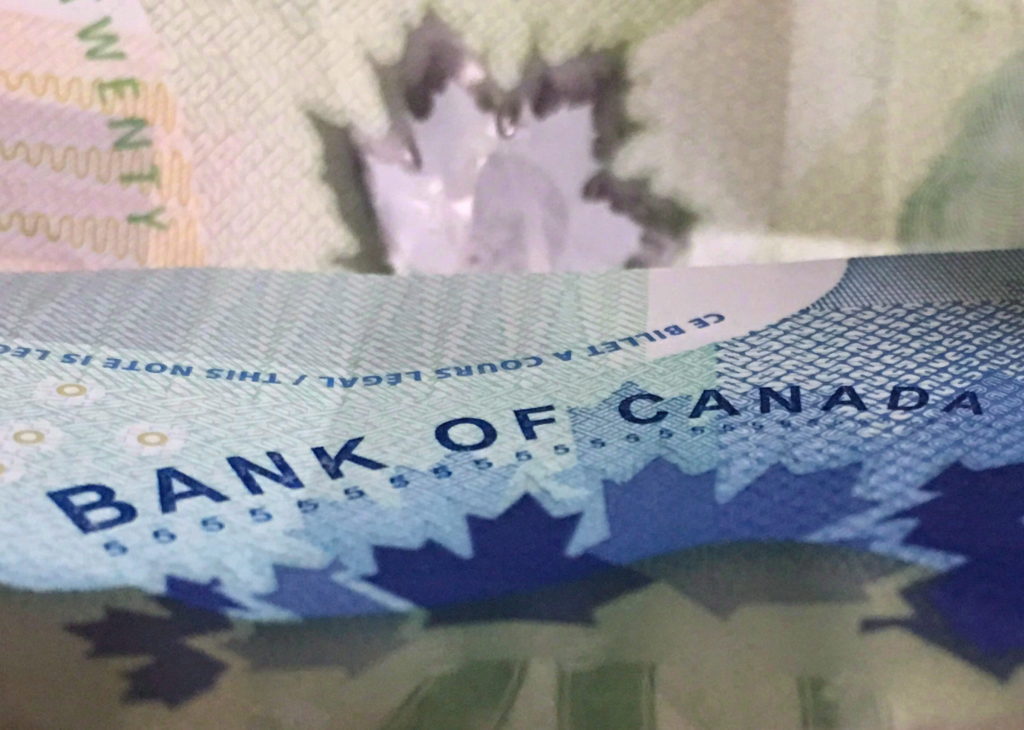 The Bank of Canada will decide today whether to continue raising interest rates, and will issue its latest predictions for the Canadian economy. Canadian bank notes are seen, in Ottawa on Wednesday, September 6, 2017. THE CANADIAN PRESS/Adrian Wyld

OTTAWA _ The Bank of Canada raised its trend-setting interest rate Wednesday and sent signals that future hikes could be upon Canadians sooner than previously expected.

With a big source of trade uncertainty finally out of the way, the central bank delivered a quarter-point rate increase for the fifth time since the summer of 2017. The move lifted benchmark to 1.75 per cent — its highest level in about a decade.

The hike arrived with Canada’s economy showing resilience and the unemployment rate hovering near four-decade lows.

The increase followed governor Stephen Poloz’s first policy meeting since Canada agreed with the United States and Mexico earlier this month on an updated North American free trade deal. The bank said the new trade agreement will reduce uncertainty, which it described as “an important curb” on business confidence and investment.

The removal of one of the trade shackles also coincided with a notable change: a single word yanked from the bank’s statement.

Recent post-policy-meeting statements used the word “gradual” to help explain how the bank’s governing council would approach the timing of future rate increases.

This time around, however, the bank decided to leave the word out. Some observers interpreted the omission as a signal of the bank’s shift to a faster, more-aggressive hiking path.

Poloz insisted the word’s exclusion was designed to give the bank more flexibility when it comes to the speed at which it chooses to proceed.

“Markets seem to have settled on ‘gradual’ meaning we would only move on every second meeting, to put it most bluntly,” Poloz told reporters Wednesday when asked about the change.

“We thought, well, we really don’t want to reinforce that as a locked-in, mechanical expectation. And so, this is serving notice that it could be faster or it could be slower.”

Either way, the bank sent the a clear message that more increases will be needed to bring the rate to a “neutral stance” in order to keep inflation from running too hot. Poloz’s team has pegged the neutral rate at between 2.5 and 3.5 per cent, so several more increases are likely on the way.

The bank stressed the pace of future hikes will be guided by how well households are adjusting to the higher interest rates, given their high levels of debt.

So far, the bank said Canadians have been making spending adjustments in response to earlier rate hikes and stricter mortgage policies — and credit growth continues to moderate. Household vulnerabilities — while still elevated — have edged down as a result, it said.

“You always need to see more data because it’s still relatively early days, but they seem to be adjusting as we had expected,” senior deputy governor Carolyn Wilkins said.

“I think higher interest rates are always difficult when people haven’t seen them in a long time.”

Poloz said he understands rate increases can be difficult for some people, but he argued the economy is running at its capacity and no longer needs stimulus.

“It’s our job to prevent the thing from overheating and creating inflation pressures down the road,” he said.

Until the hike Wednesday, the interest rate hadn’t been above 1.5 per cent since December 2008. At that time, during the financial crisis, the bank made a three-quarter-point cut to the benchmark, bringing it to 1.5 per cent from 2.25 per cent.

Moving forward, the bank predicts the economy to remain solid.

Consumer spending is expected to continue expanding at a “healthy pace,” thanks in large part to the steady rise of incomes and the strength of consumer confidence.

It projects exports to keep growing at a moderate clip, even though they will face limitations from several factors — including transportation capacity constraints, global trade uncertainty and stiff competition, particularly from the U.S.

The report predicted business investment — outside the oil and gas sector — to expand due to solid domestic and foreign demand.

The bank noted, however, that Canada is still grappling with competitiveness challenges linked to major U.S. tax and regulatory changes as well as ongoing uncertainties around pipeline approval. It anticipates these factors will encourage some exporters to delay their investments or to make them outside Canada.

Following the new North American trade agreement, the bank now expects lingering trade tensions _ such as U.S. metals tariffs and Canada’s countermeasures _ to lower business investment by just 0.7 per cent by the end of 2020, compared with the 1.4 per cent reduction it had predicted in July. Exports are now expected to take a negative hit of just 0.3 per cent compared to the previous prediction of a 0.7 per cent reduction.

The bank also released its latest monetary policy report, which predicted Canada’s real gross domestic product to expand 2.1 per cent in 2019, down from its July call of 2.2 per cent, and by 1.9 per cent in 2020. Its growth projection for this year has been increased slightly to 2.1 per cent, up from its previous prediction of two per cent.

What do do with the proceeds of a house...