Why disability insurance is so important

We underestimate the possibility of becoming temporarily disabled

One-in-three working Canadians will experience a period of disability lasting longer than 90 days during their working lives, according to statistics but a new study for RBC suggests nearly half of Canadians underestimate how frequently disability actually occurs.

In reality, 62% of Canadian workers have been exposed to someone having taken time off of work due to a disability, with 25% having had taken this time themselves.

Even a temporary disability could affect your ability to work and take home a paycheque. Without disability insurance to help cover expenses, many families would find themselves in financial trouble. A separate study released earlier month revealed 51% of workers would find it difficult to meet their financial obligations if their paycheque were delayed by a single week.

“When it comes to disability, what Canadians don’t know can hurt them,” RBC’s Mark Hardy said in a press release Tuesday. “The research indicates that Canadians are overly optimistic about avoiding a disability and that lack of understanding reinforces the need for more education around this critical issue.”

The numbers also reveal that less than half of Canadians consider conditions such as depression and arthritis a disability along with terminal illness and physical accidents.

“There is a mistaken perception that disabilities tend to be catastrophic in nature—caused by one-time, traumatic events. Most Canadians don’t recognize that common, chronic conditions such as mental illness cause the majority of disabilities. In fact, less than 10% of disabilities are caused by accidents,” Hardy said. 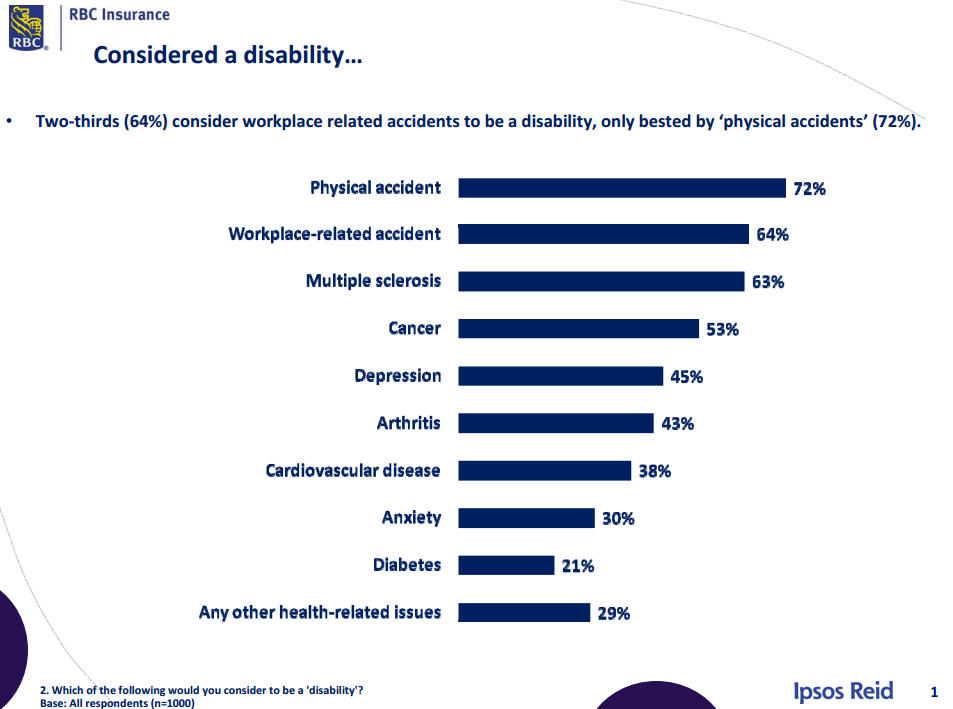 The top reason Canadians cited for not purchasing individual disability insurance is because they believe they have enough coverage through their employer. And while that may be true, it’s a good idea to double check whether you are indeed covered and what the extent of that coverage is.

Here’s more information from MoneySense on the types of disability insurance available and how payouts work.

RBC Insurance commissioned Ipsos to conduct a survey to gauge public opinion of Canadian workers regarding matters related to disability, disability in the workplace, and disability insurance coverage. The survey was conducted between July 14 to July 18, 2014. In total, a sample of 1,000 employed Canadians was surveyed online using Ipsos’s I-Say online panel. The precision of Ipsos’s online survey are measured using a credibility interval, in this case the results are considered accurate to within ± 3.5 percentage points, 19 times out of 20, had the entire population of Canadian workers been polled.